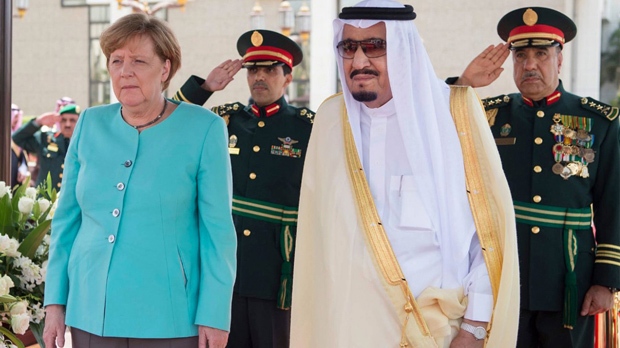 RIYADH, Saudi Arabia -- German Chancellor Angela Merkel met with Saudi Arabia's King Salman and his successors in her first visit to the kingdom in seven years, saying she pressed them on women's rights, the war in Yemen and other sensitive issues.

After her meetings in the Red Sea city of Jiddah, she told German journalists travelling with her that she raised human rights concerns with Saudi leaders, including the rights of women.

She said Saudi Arabia's war in Yemen also was discussed. For more than two years, the kingdom has been bombing Yemeni rebels aligned with Saudi Arabia's regional Shiite rival, Iran. The conflict there has driven the Arab world's poorest countries to the brink of famine, with 27 million people needing humanitarian or protection assistance.

"We don't believe there can be a military solution to the conflict," Merkel said.

Saudi Arabia and Iran also back opposite sides of the conflict in Syria, and Germany was one of six international powers that negotiated the nuclear deal with Iran to which Saudi Arabia objected.

As is customary, Saudi officials did not comment on the details of the meetings.

During the meetings, Merkel said, she specifically discussed the kingdom's death penalty. Saudi Arabia has one of the world's highest execution rates and executes people for non-lethal offences such as drug smuggling.

She also raised the case of Raif Badawi, a Saudi blogger whose public lashing drew international condemnation from even the kingdom's closest Western allies. He is serving a 10-year prison sentence for blog posts critical of the country's powerful religious establishment.

Having scheduled a meeting with Saudi businesswomen during her two-day visit, Merkel acknowledged there have been "significant changes in the role of women" since her last visit in 2010. She cited the historic first-time participation of women in Saudi Arabia's only elections for local council seats in 2015.

She noted, however, that women in Saudi Arabia still face many restrictions.

"I have the impression that the country is in a phase of change and that a lot more is possible now than some years ago, but it's still a long way away from having achieved what we would understand as equality," Merkel said.

Like other high-profile female visitors, Merkel did not cover her hair or wear a traditional flowing black robe upon arrival in the kingdom.

Merkel herself backs a ban in Germany on civil servants wearing face veils and on face covers being worn in public schools and courts and by car drivers. Most Saudi women wear the full face veil, known as the niqab, in line with the kingdom's conservative Wahhabi interpretation of Islam.

The German leader was scheduled to visit the United Arab Emirates on Monday.

During her meetings in the Gulf, Merkel is urging the region's rulers to do more to take in refugees and provide humanitarian relief for those fleeing conflict in Muslim-majority countries. Germany has provided refuge to hundreds of thousands of people from Syria, Iraq and Afghanistan in recent years.

Merkel is travelling with a business delegation that includes CEOs of major German companies that are eyeing opportunities in Saudi Arabia. The kingdom is trying to attract greater foreign investment as it diversifies its economy away from oil, the backbone of its economy.

She expressed to Saudi officials that Europe remains interested in a free trade agreement with Gulf states. Saudi Arabia and the UAE are Germany's largest trading partners in the Middle East.

The official Saudi Press Agency reported the two sides signed a number of memorandums to enhance co-operation in the fields of technology, energy and business.

Despite a drop in oil prices that has forced the kingdom to curb spending, Saudi Arabia remains among the world's top spenders on defence equipment. While there is no German moratorium on weapons exports to Saudi Arabia, the German government does review deals on a case-by-case basis to ensure any military equipment sold cannot be used for internal repression.

Markel said that due to Saudi Arabia's prominent role in the Middle East, Germany will continue to offer training to Saudi police, security forces and border guards.