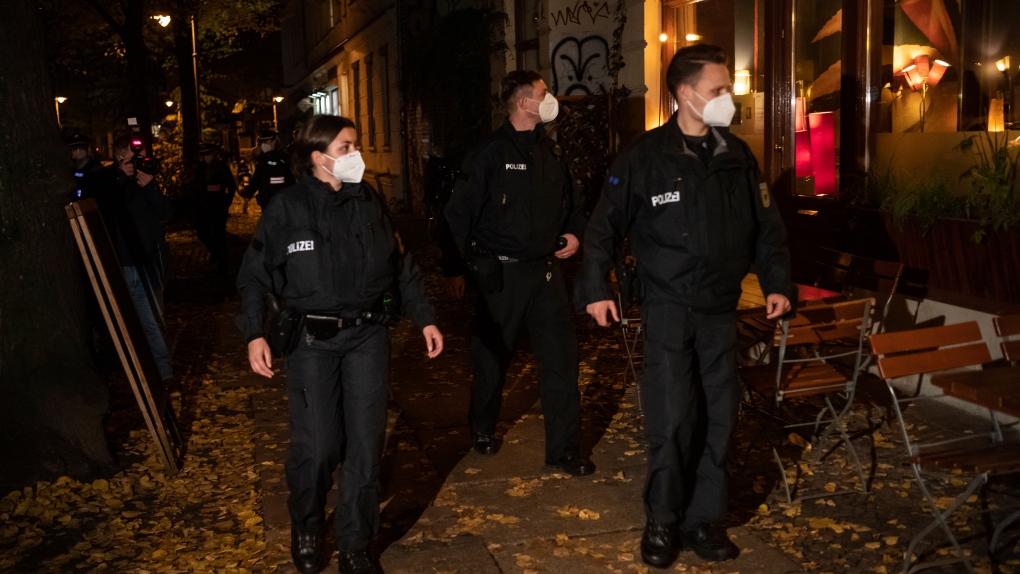 A patrol of the federal police goes along Kollwitz-Platz in Berlin, Germany, Saturday, Oct.24, 2020. In connection with the corona restrictions, numerous police officers checked during the night that the curfew and contact restrictions were being observed. (Paul Zinken/dpa via AP)

TORONTO -- Police in Berlin, Germany, broke up what they described as a “fetish party” made up of more than 600 people on Saturday for violating COVID-19 restrictions.

Police tweeted that the party, held in Mitte, a borough in Berlin, “probably ended unsatisfactorily” for guests.

Although the gathering was held outside, police said the venue was too small for people to physically distance, the BBC reports.

Two separate police forces, including the federal riot police, collaborated to end the party and let the participants know it was time to go home, the tweet said.

Although police did not name the organizers in their tweet, the Alte Munze, a performance venue and club in Mitte posted a statement to their Facebook and website on Saturday in response to the police tweet, saying that “an open-air event took place in the courtyard” of 3,500 square metres “in compliance with the current hygiene regulations of the State of Berlin.

“The event served as a meeting point for the community,” they added. “We find it reprehensible to declare this a ‘fetish party.’”

They said they had a mask requirement and far less people than the 5,000 currently permitted to gather for outdoor events in Berlin. It was also slated to be the last open-air gathering the organizers had planned for the foreseeable future.

Although Germany has fared better with COVID-19 than some other European countries overall, it is currently facing a resurgence in cases along with much of Europe. As of Sunday, Germany had almost 430,000 confirmed COVID-19 cases cumulatively.

Berlin has racked up the highest rate of infections out of Germany’s 16 states, with 119.1 people out of every 100,000 contracting the virus as of Saturday. Since the beginning of the pandemic, more than 25,000 people have contracted COVID-19 in Berlin alone.

Saturday’s outdoor gathering is far from the only outdoor event under 5,000 that has been shut down by police in Berlin recently. On Sunday, police tweeted that around 2,000 people had gathered at Alexanderplatz square in Mitte, and “to a large extent, neither the minimum distance nor the obligation to cover the mouth and nose was observed.”

Media reports stated the gathering was a protest against coronavirus restrictions.