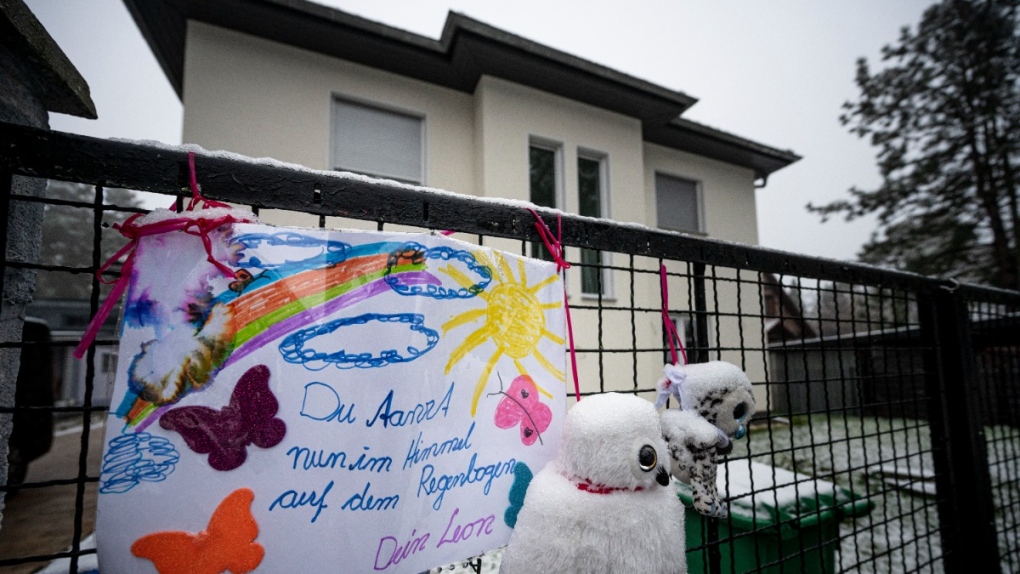 A message and soft toys are placed at a fence in front of a family home in Koenigs Wusterhausen, Germany, on Dec. 5, 2021. (Fabian Sommer / dpa via AP)

BERLIN -- German investigators said Tuesday that a man suspected of killing his family and then himself left a note indicating that he was afraid of being arrested after procuring a fake vaccination certificate for his wife.

The bodies of two 40-year-olds and their children aged 10, 8 and 4 were found with gunshot wounds at their home in Koenigs Wusterhausen, just outside Berlin, on Saturday.

Prosecutor Gernot Bantleon told news agency dpa that the man said in the note, which was found at the house, that he had had a vaccination certificate forged for his wife and her employer had found out. The couple were afraid that they might be arrested and their children taken away. He wouldn't give further details.

Investigators suspect that the man killed his wife and children and then himself. They found a gun in the house, but it wasn't immediately clear whether it was the weapon used to fire the fatal shots. They found no indication that anyone else was present at the time or that anyone forced their way into the house.

Indigenous papal visit postponed to 2022 amid concerns around Omicron

Quebec to allow gatherings of 20 people in homes starting Dec. 23

P.E.I. reports five new cases of COVID-19 Tuesday, three under the age of 12

Human trials to begin on made-in-Canada COVID-19 vaccine you inhale, not inject