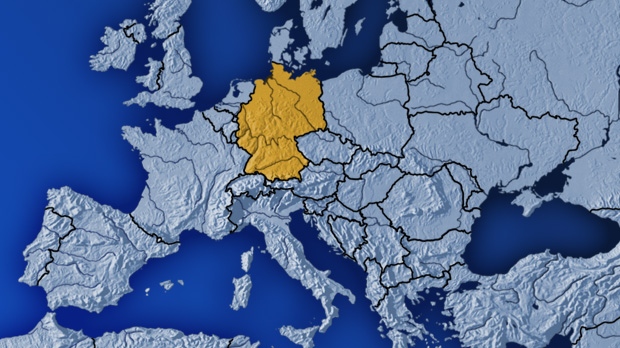 A map of Germany is seen in this image.

BERLIN -- A 22-year-old is under investigation after chopping off another man's hand with a machete at an outdoor recreation area in western Germany, prosecutors said Monday.

Prosecutors in Koblenz said the suspect told authorities he had been chopping firewood in a forested area west of the city on Saturday night when he witnessed a car crash.

According to the suspect, he ran to the car still carrying the machete to see if the driver needed help and that the driver pulled out a gun from the glove box and started firing at him, prosecutors said.

In reaction, he swung the machete at the driver, severing the 21-year-old's left hand. Minutes later, a large vehicle drove up from a nearby grilling area, and two men jumped out and punched the suspect multiple times in the face, prosecutors said the 22-year-old recounted.

The suspect was treated in a hospital for injuries to the face and released after being interrogated, prosecutors said. The investigation is still underway, but prosecutors said they were considering whether he acted out of self-defence.

The man whose hand was severed was treated in a hospital and reported to be in stable condition.

Police determined that the weapon he fired was a starter pistol only capable of shooting blanks.