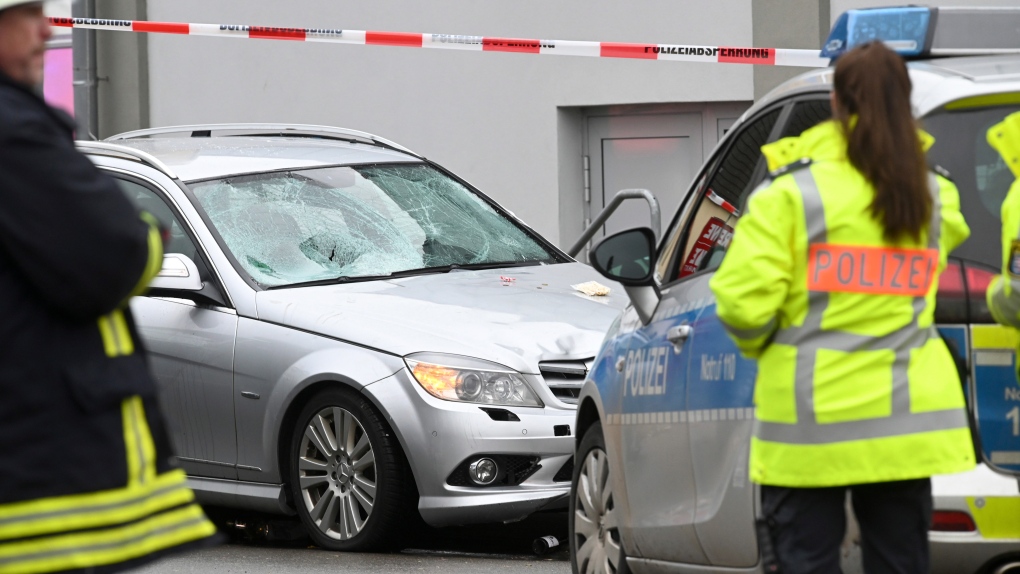 Police stand next to the scene of the accident with the car that is said to have crashed into a carnival parade in Volkmarsen, central Germany, Monday, Feb. 24, 2020. (Uwe Zucchi/dpa via AP)

BERLIN -- A man intentionally drove a car into a crowd at a Carnival parade in a small town in central Germany, injuring around 30 people including children, officials said Monday.

The driver, a 29-year-old German citizen who lived locally, was arrested at the scene in Volkmarsen near Kassel, about 280 kilometres (175 miles) southwest of Berlin, prosecutors said. He is being investigated on suspicion of attempted homicide.

A spokesman for Frankfurt prosecutors, Alexander Badle, said in a statement that "about 30 people" were injured. They were taken to surrounding hospitals, some with life-threatening injuries.

"The investigation, especially into the circumstances of the crime, continues," he said. "In particular, no information can yet be provided about a motive. The investigation is exploring all avenues."

"This is a terrible act committed against people who simply wanted to celebrate Carnival," said Peter Beuth, the interior minister for the state of Hesse, where Volkmarsen is located. He declined to comment on reports that a second person was detained following the crash.

Beuth said about a third of those injured were children, who had come to watch the parade and collect candy that's traditionally thrown into the crowds at Carnival celebrations in Germany.

Chancellor Angela Merkel sent her condolences to those injured in the crash, wishing them a speedy and full recovery. She also thanked the police and all medical personnel involved.

Emergency responders set up a makeshift clinic in a town pharmacy to treat casualties with minor injuries, the regional Frankfurter Rundschau newspaper reported.

Witnesses said the car drove around a barrier blocking off traffic from the parade, according to the paper.

Video from the scene showed a silver Mercedes station wagon with local license plates on a sidewalk, its front windshield badly smashed and hood dented, and its hazard lights blinking, while emergency crews walked by. Forensic experts could be seen taking photos and measurements around the crashed car, walking around fragments of Carnival costumes that littered the ground.

The crash came amid the height of Germany's celebration of Carnival, with the biggest parades in Cologne, Duesseldorf and Mainz.

All other Carnival parades in the central state of Hesse were ended Monday as a precaution.

Hesse state is still reeling from a racist shooting last week in the Frankfurt suburb of Hanau. A 43-year-old man killed nine people with immigrant backgrounds late Wednesday before killing his mother and then himself.