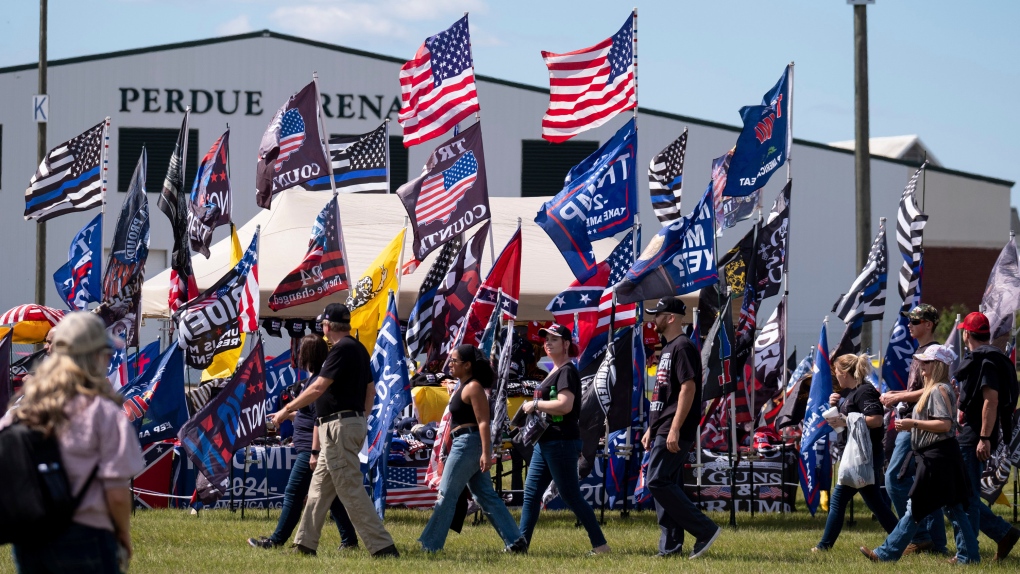 PERRY, GA. -- The rewards of an early Donald Trump endorsement were on display Saturday in Georgia when a three-man ticket of candidates he's backing in 2022 Republican primaries were featured at one of his signature rallies. But GOP opponents of Trump-backed candidates aren't folding in Georgia and some say the former president's nod could hurt Republicans in a general election in the closely divided state.

Trump's endorsement blitz is a frank attempt to keep remaking the party in his image, with Republicans eagerly courting his favor. But like everything else about the former president, it's a rule-rewriting approach, said Casey Dominguez, a political science professor at the University of San Diego.

"We haven't seen presidents in recent years try to drive a wedge within their own party, which is what happens in a primary election," Dominguez said. "He's playing factional politics in the party."

It's easy to see why they might want Trump's backing. He maintains overwhelming support among Republican voters. Ballotpedia, which tracks Trump endorsements, says candidates he endorsed have won 37 of 43 competitive primaries since 2017.

Trump was joined at the rally in Perry, about 100 miles (160 kilometres) south of Atlanta by three candidates he has endorsed, including Herschel Walker, who recently launched a Senate campaign. Trump had urged the former football great to challenge Democratic U.S. Sen. Raphael Warnock.

In one of his first public appearances since entering the race, Walker on Saturday talked about his relationship with Trump, but also urged his listeners to "come together as a people" and not be upset with others "because they disagree with you."

Completing the trio is state Sen. Burt Jones, an early Trump supporter who pushed measures to overturn Biden's Georgia win and is running for lieutenant governor.

The rally, though, was all about Trump, who remains the star of his own show as numerous supporters arrived wearing Trump gear.

Despite a lack of credible evidence to support Trump's allegations of mass voter fraud, the former president has continued to push the "Big Lie" that he won, turning it into a litmus test for GOP candidates. A majority of Republican voters continue to believe the election was stolen, despite dozens of state and local elections officials, numerous judges and Trump's own attorney general saying Biden won fairly.

Although some primary fields have been winnowed by Trump's endorsement, that hasn't happened in Georgia.

"It's OK to be a fan of Herschel Walker the football player," Black said. "But it's also OK to want to win the Senate back and save our country from the chaos it's in now. Georgians need an electable choice who can stand up to the national Democrats and $100 million or more in attack ads."

Jones describes himself as an underdog in his primary against a powerful business-backed state senator, but recently said the former president's backing "is going to be a pretty loud intercom saying this is a guy who will actually stand up for his constituents and stand up for conservative values."

Trump's nod could be a liability in a general election, though. Trump lost narrowly in Georgia, and Republicans Kelly Loeffler and David Perdue lost runoffs for Senate seats to Warnock and Jon Ossoff by wider margins in January. Many, including some Republicans, have said Trump's insistent claims that the November 2020 election was rigged depressed GOP runoff turnout, delivering U.S. Senate control to Democrats.

Democratic State Rep. Bee Nguyen, who is also running for secretary of state in 2022, said Trump's endorsements are part of his "vendetta" against some Republicans. Nguyen said Trump's activity will stir up Democratic voters, as will a restrictive election law that Republicans passed this year.

"It will continue to mobilize our base because our base understands voting rights are on the chopping block," said Nguyen, who also predicted that the "constant efforts to discredit the results of the November election" would fire up Democrats.

"When comparing a Trump-endorsed candidate to a Biden-endorsed candidate, our advantage with the unaffiliated voters evaporates," Shumaker wrote. "In addition, the Democratic advantage widens with college graduates and suburban voters while the rural vote softens somewhat for Republicans."

Shumaker is working for former North Carolina Gov. Pat McCrory, who is running against Trump-endorsed U.S. Rep. Ted Budd in a Republican Senate primary to replace the retiring Richard Burr. Shumaker said the poll wasn't paid for by McCrory.

Then there is the top Georgia Republican not on the Trump ticket -- Gov. Brian Kemp. Former Democrat Vernon Jones is openly courting Trump's nod, but the former president has withheld his favor while Trump supporters have floated other possible candidates.

Trump's scorn for Kemp was clear on Saturday as he sarcastically suggested that he would prefer Democrat Stacey Abrams to the incumbent governor. Abrams narrowly lost to Kemp in 2018 and is considering whether to run again.

"Stacey, would you like to take his place? It's OK with me," Trump said.

Despite Trump's antipathy for Kemp, the incumbent governor may achieve a detente with some Trump-backed candidates.

Walker hired a spokesperson from Kemp's office, one possible indicator Walker may steer clear of attacking Kemp. His early message has been more positive and less confrontational than Trump.

Kemp appeared with Hice at a Sept. 13 event to criticize the Biden administration's legislative agenda. Kemp voiced hope then that Republicans could unify in opposition.