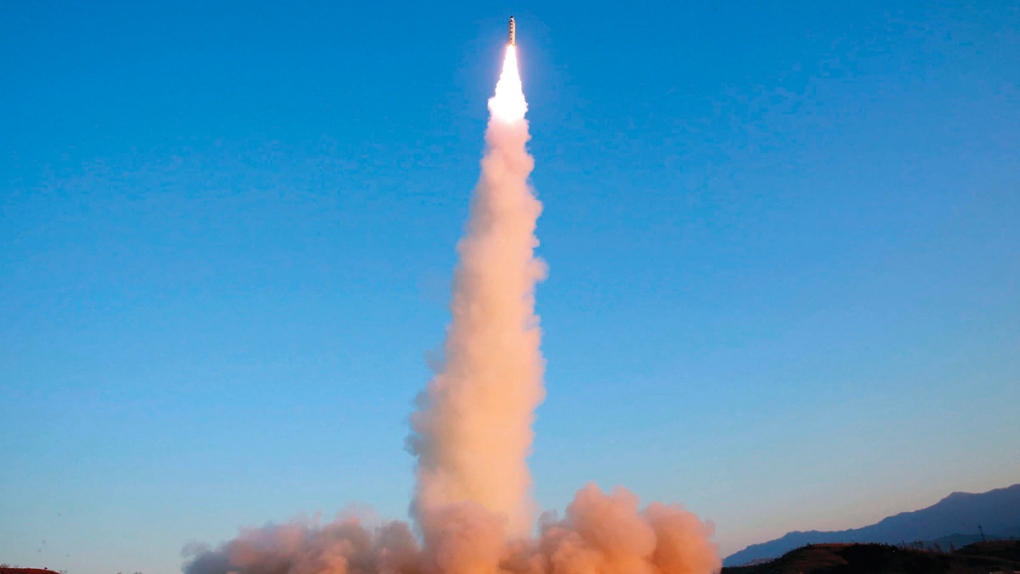 'Pukguksong-2' is launched at an undisclosed location in North Korea, on Feb. 12, 2017. (Korean Central News Agency/Korea News Service via AP)

BEIJING -- Research by Chinese geologists suggests that the mountain above North Korea's main nuclear test site has likely collapsed, rendering it unsafe for further testing and requiring that it be monitored for any leaking radiation.

The findings by the scientists at the University of Science and Technology of China may shed new light on North Korean President Kim Jong Un's announcement that his country was ceasing its testing program ahead of planned summit meetings with South Korean President Moon Jae-in and U.S. President Donald Trump.

The results also support some of the findings of an earlier study by another group of Chinese researchers that was published last month by the journal Geophysical Research Letters.

Nuclear explosions release enormous amounts of heat and energy, and the North's largest test in September was believed early on to have rendered the site in northeastern North Korea unstable.

Chinese authorities have said they've detected no radiation risk from samples collected along the border. Calls to those departments were not immediately answered on Thursday.

The data in the latest Chinese study was collected following the most powerful of North Korea's six nuclear device tests on Sept. 3, which is believed to have triggered four earthquakes over the following weeks. The yield of the bomb was estimated at more than 100 kilotons of TNT, at least 10 times stronger than anything the North had tested previously. (The bomb the United States dropped on Hiroshima in 1945 had a yield of about 15 kilotons.)

The University of Science and Technology of China paper, authored by Tian Dongdong, Yao Jiawen and Wen Lianxing, said the first of those earthquakes, which occurred 8 1/2 minutes after the explosion, was "an onsite collapse toward the nuclear test centre," while those that followed were an "earthquake swarm" in similar locations.

"In view of the research finding that the North Korea nuclear test site at Mantapsan has collapsed, it is necessary to continue to monitor any leakage of radioactive materials that may have been caused by the collapse," the authors said in a summary dated Monday and viewed Wednesday on the university's website.

The study is peer-reviewed and has been accepted for publication by the journal Geophysical Research Letters.

The Chinese study makes sense and is based on well understood research, said Rowena Lohman, a seismologist at Cornell University who wasn't part of the work. She said she believes there's an international effort that monitors these tests for radiation.

A study published last month by the journal, authored by a team led by Liu Junqing at the earthquake bureau in Jilin province along the border with North Korea, found similar results of the Sept. 3 explosion. It described the aftershock that followed seconds later as most likely a "rapid destruction of an explosion-generated cracked rock chimney due to cavity collapse."

North Korea's nuclear tests are of special concern to Beijing, since the test site near the town of Kilju is less than 100 kilometres (60 miles) from the border with China.

North Korean nuclear tests have caused seismic events in Chinese border towns and cities, forcing evacuations of schools and offices, sparking fears of wind-born radiation and leading to a backlash among some Chinese against their country's unpredictable traditional ally.

Ties between the sides have been deteriorating for years, although Kim made a long-anticipated visit to Beijing last month after China's implementation of United Nations economic sanctions reduced trade between them by as much as 90 per cent.

The quakes that followed the September test were not man-made and didn't appear to cause any damage in the area. The region isn't one where earthquakes naturally occur and no quakes were detected after the five smaller nuclear tests North Korea has conducted since 2006.

Kune Yull Suh, a professor of nuclear engineering at Seoul National University, warned last year that further tests could threaten to cause a volcanic eruption at Mount Paektu, which is about 100 kilometres (60 miles) away.

On Saturday, North Korea announced it will close its nuclear testing facility and suspend nuclear and intercontinental ballistic missile tests -- a move welcomed by Trump as "big progress" -- and which comes ahead of the planned summit between him and Kim.

However, the North stopped short of suggesting it will give up its nuclear weapons or scale back its production of missiles and their related components.

Korean summit starts with a handshake, after year of tension

A 'path to co-existence': Key events in the Korean conflict

Ahead of summits, U.S. tones down war games with South Korea