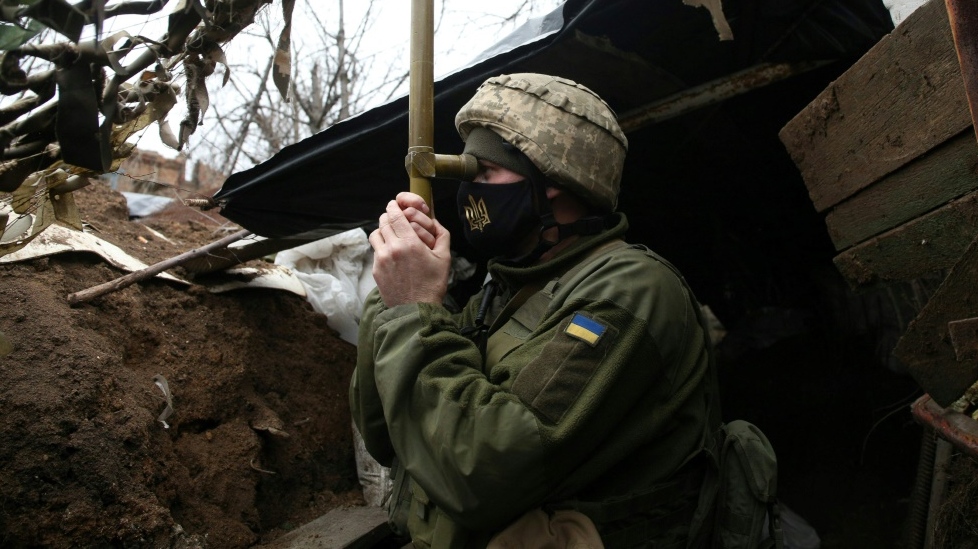 A Ukrainian soldier stands guard on the front line with Russia-backed separatists. (AFP)

PARIS, FRANCE -- The Group of Seven leading economic powers on Monday called on Russia to stop its "provocations" and "de-escalate tensions" following its troop build-up on the border with Ukraine.

The G7 foreign ministers issued their joint appeal on the eve of a NATO meeting in Brussels over concerns that the years-long conflict in eastern Ukraine could escalate sharply.

The ministers, most of whose countries also belong to NATO, "are deeply concerned by the large ongoing build-up of Russian military forces on Ukraine's borders and in illegally-annexed Crimea," they said in a statement.

"These large-scale troop movements, without prior notification, represent threatening and destabilising activities," the statement added.

"We call on Russia to cease its provocations and to immediately de-escalate tensions in line with its international obligations."

The G7 -- the United States, Britain, France, Germany, Italy, Canada and non-NATO Japan -- also urged Russia to uphold international "principles and commitments that it has signed up to on transparency of military movements".

In March, the G7 said it would not accept Russia's annexation of Crimea from Ukraine, in a statement marking seven years since the takeover.

Shortly after the annexation, Russia-backed separatists in eastern Ukraine began fighting a conflict against the Ukrainian army that has so far claimed more than 13,000 lives, according to the UN.

The G7 reiterated its March statement by backing "the independence, sovereignty and territorial integrity of Ukraine within its internationally recognised borders".

And it backed what it called "Ukraine's posture of restraint".

The G7 renewed calls for all parties to implement a 2015 peace deal known as Minsk II that banned tanks and other heavy weapons.

Ukraine has accused Russia of amassing thousands of military personnel on its northern and eastern borders as well as on the annexed Crimean peninsula.

The Kremlin has not denied the troop movements but has insisted that Moscow does not intend to threaten anyone.

The White House this week said the number of Russian troops at the border with Ukraine was now greater than at any time since 2014 when the conflict erupted.

Fighting subsided in 2020 as a ceasefire agreement took hold last July, but clashes have picked up again since the start of the year, with each side blaming the other.

Ukraine's army said that a serviceman was killed on Saturday when separatist fighters opened fire with small arms, while another soldier was fatally shot and wounded on Monday.

On Thursday Ukraine's President Volodymyr Zelensky visited the eastern frontline, speaking with soldiers in the trenches.

Ukraine's Foreign Minister Dmytro Kuleba is due to meet with NATO chief Jens Stoltenberg on Tuesday, with U.S. Secretary of State Antony Blinken also heading to Brussels for talks.

Blinken and Stoltenberg spoke by phone Monday ahead of his visit to discuss issues "including the immediate need for Russia to cease its aggressive military buildup along Ukraine's borders and in occupied Crimea," the State Department said.

Blinken warned in an interview on Sunday of "consequences" if Russia acts "aggressively" towards Ukraine.