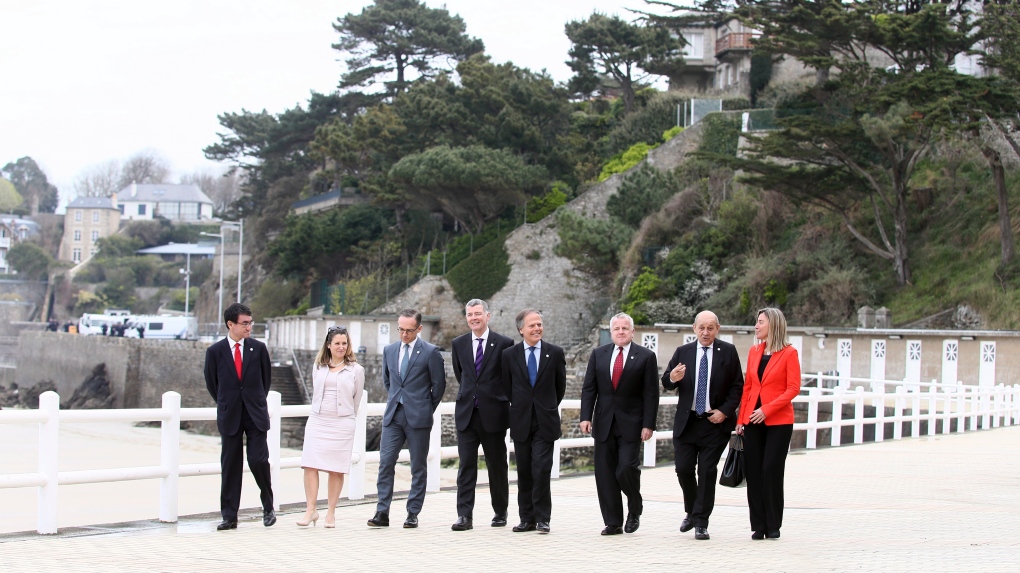 DINARD, France -- Foreign ministers from the Group of Seven nations revealed stark divergences in views on the Middle East on Saturday as they wrapped up a meeting in France that opened with the goal of finding common ground on contentious global challenges but was shaken by the absence of U.S. Secretary of State Mike Pompeo.

The diplomats in attendance projected a united front while walking side-by-side along a seaside promenade before they released the agreement from their two-day meeting in Dinard. The agreement included mildly worded joint commitments on issues such as fighting cybercrime, giving women bigger peacemaking roles, and engaging with countries in Africa's Sahel region to combat migrant trafficking.

But what was omitted from the G-7's positions said as much as what was included. The differences could set the stage for tensions at an August summit of the leaders of the G-7 advanced economies -- the United States, France, Canada, Japan, Germany, Italy and the U.K.

A European Union official expressed "regret" the document had what she considered to be several glaring omissions that conflicted with non-negotiable positions of the EU. They included "no reference to a two-state solution" in the Israeli-Palestinian conflict and "no mention" of the U.N. Security Council resolution in favour of the Iran nuclear deal, she said.

The official, who spoke on condition of anonymity because she was not allowed to speak to the news media, said the language used to described the G-7's deep concern over Iran's "continuing support for terrorist organizations and armed militias" was not language EU members tend to use. Four of the G-7 nations are in the European Union.

The foreign ministers' joint statement itself acknowledged "clear differences" on the Israeli-Palestinian conflict after "an exchange of views."

The agreement included an initiative to help countries share best practices on encouraging responsible online behaviour. Also, the group pledged to encourage the creation of funds to help survivors of sexual violence in danger spots, and to encourage Sahel countries to take steps to end trafficking. It also reaffirmed the G-7's "commitment to a rules-based international order."

Discord is becoming a theme for the group.

Last June, U.S. President Donald Trump roiled the G-7 meeting in Charlevoix, Que., by first agreeing to a group statement on trade, then withdrawing support from it and sending a string of negative tweets about the summit and its host, Prime Minister Justin Trudeau.

On Saturday in Dinard, Foreign Affairs Minister Chrystia Freeland tweeted a photo of herself and her counterparts from Germany, France and Japan.

"Many of today's greatest challenges are global and they can only be solved when we work together. That is why Canada stands united with its German, French, and Japanese friends," Freeland wrote, adding the hashtag .AllianceofMultilaterists.

U.S. Deputy Secretary of State John J. Sullivan, who went in Pompeo's stead, said Washington would use the G-7 forum to galvanize support for Venezuela's opposition leader, Juan Guaido, whose claim to the presidency is backed by the U.S. and about 50 other countries.

But the meeting failed to change the position of Italy, the sole G-7 member state not to back Guaido.

"We spoke about it. The Italian position on Venezuela is pretty clear," said Italian Foreign Minister Enzo Moavero. "It is an extremely difficult situation, especially in light of the humanitarian emergency that weighs the most in our hearts."

Guaido has set out to topple the socialist administration of President Nicolas Maduro amid deepening unrest in the country, which has been plagued by nearly a month of power outages.

Italy also has irked EU and U.S. allies by becoming the first G-7 member to sign up to a Chinese plan to build a Silk Road-style global trade network, the Belt and Road Initiative.

Any reference to the contentious trillion-dollar plan was missing in Saturday's texts.

Trisha Thomas and Masha Macpherson contributed to this report.