From diplomatic disagreements to outright insults, no love lost between Macron and Erdogan 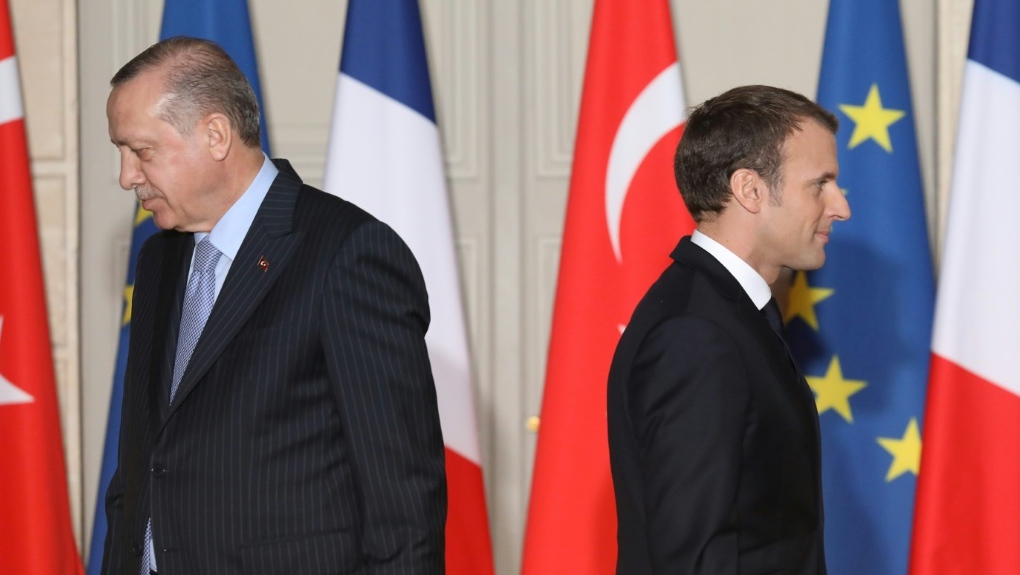 PARIS, FRANCE -- The relationship between French President Emmanuel Macron and his Turkish counterpart Recep Tayyip Erdogan has degenerated in recent months from diplomatic disagreements to annoyance to outright insults.

They have clashed over the wars in Syria and Libya, a scramble for natural gas in the Mediterranean and now on Macron's vow to uphold secular values, including the right to mock Islam and other religions, as part of a battle against extremism.

When Macron became president in 2017, ties between the former imperial powers were already tense.

Paris never really bought into the plan, since stalled, to integrate Turkey into the European Union. And in 2001, Paris outraged Ankara when it officially recognised the mass killings of Armenians by Ottoman Turks during World War I as genocide.

Since then, the bones of contention have multiplied, with the two countries often finding themselves on different sides in international conflicts.

Erdogan warned Macron last month not to "mess with Turkey" after a number of critical statements by the French leader.

For Didier Billion, a Turkey specialist at the French Institute for International and Strategic Affairs in Paris, neither leader seems willing to hear out the other.

"Clashing ideological visions now seem to prevail," he recently wrote in an analysis.

In October 2019, Ankara sparked the ire of Paris by taking a strip of land inside Syrian territory from Western-backed Kurdish forces fighting the Islamic State group.

In Libya, Ankara has fought on the side of the Government of National Accord of Fayez al-Sarraj, recognised by the UN, against the forces of Khalifa Haftar, which Paris was long suspected of supporting.

France now insists it is neutral in the conflict and has called for an end to foreign interference, but refuses to allow Turkey gain a foothold in Libya.

The two nations also disagree on the Mediterranean, where Turkey is engaged in exploration and drilling operations in waters claimed by both Cyprus and Greece.

Macron last month said Europe needed to be "clear and firm" with Erdogan's government on the Mediterranean question, prompting Ankara to describe the French leader as "arrogant".

More recently, the leaders exchanged words publicly over the conflict in Nagorno-Karabakh, where Turkey backs Azerbaijan against Armenia.

France and Turkey are members of the North Atlantic Treaty Organization (NATO), but do not see eye-to-eye on its role either.

In November last year, Macron said that the lack of response by NATO to a unilateral Turkish operation in northern Syria showed that the alliance was experiencing "brain death".

Erdogan responded by suggesting that the French leader himself was "brain dead".

The spat escalated in June this year, when France said one of its ships had been subjected to radar targeting by Turkish frigates as it sought to inspect a cargo vessel suspected of carrying arms to Libya.

While Turkey is officially a secular country, Erdogan has taken on the mantle of defender of Islam at a time when France is grappling with radicalization and a wave of terror attacks.

He reacted angrily when Macron announced a plan this month to protect France's secular values against what he termed Islamist "separatism" and described Islam as a religion "in crisis".

Erdogan described the French leader's statements as an "open provocation".

More recently, Paris accused Turkey on Sunday of not having officially condemned the October 16 beheading of French teacher Samuel Paty for having shown cartoons of the Prophet Mohamed to pupils in a class discussion on free speech.

Ankara insisted it had passed on condolences to France's ambassador, but on Monday formally condemned "the monstrous murder".

Ali Bakeer, a Turkish political analyst based in Ankara, said Erdogan had no choice but to come out strong after Macron said Paty was killed "because Islamists want to take our future".

"Hearing Macron's statements, Erdogan had either to agree on what the French president said and thus look weak and helpless to his citizens and Muslims believing in his leadership, or he had to make a response. He chose to respond of course," said Bakeer.

And respond he did. On Sunday, Erdogan advised Macron to have "mental checks" for treating "millions of members from different faith groups this way".

For Pierre Razoux of the Mediterranean Foundation of Strategic Studies (FMES), Erdogan's strategy is aimed at pushing France into a wrong move, and diverting attention from his own troubles at home and abroad.

"Erdogan is trying to isolate France and divide the Europeans, so he is firing on all cylinders," Razoux told AFP.