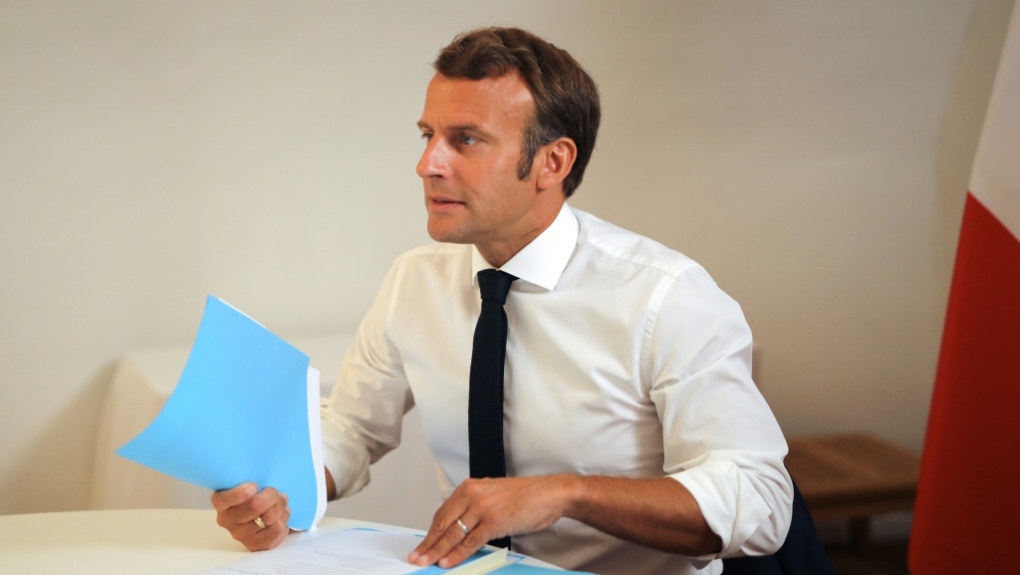 French President Emmanuel Macron, pictured August 11, 2020, who was the first world leader to visit Beirut after the explosion, has taken the lead role in coordinating the international response. (AFP)

PARIS, FRANCE -- French President Emmanuel Macron on Wednesday warned Iran against any interference in Lebanon after the gigantic blast last week that has prompted a political crisis in the country.

In telephone talks with President Hassan Rouhani, Macron emphasised the "necessity for all the powers concerned... to avoid any outside interference and to support the putting in place of a government which can manage the emergency," the Elysee said.

Lebanon's government under Prime Minister Hassan Diab resigned this week following days of demonstrations demanding accountability over the explosion at the Beirut port last week that devastated entire neighbourhoods of the city.

Iran wields huge influence in Lebanon through the Shiite group Hezbollah which was strongly represented in the outgoing government and has an alliance with the faction of President Michel Aoun.

The explosion on August 4, which left 171 people dead, has been blamed on a vast stock of ammonium nitrate allowed to rot for years at the port despite repeated warnings.

Macron, who was the first world leader to visit Beirut after the explosion, has taken the lead role in coordinating the international response and at the weekend chaired a virtual aid conference that drummed up more than 250 million euros (C$390 million) in pledges.

The French president has also sought to play a lead role in efforts to keep alive the 2015 deal by world powers on the Iranian nuclear programme, after U.S. President Donald Trump in 2018 walked out of the accord.

Analysts say that the deal has essentially been on life support since Trump's move, with Iran taking escalatory measures in retaliation by ramping up its nuclear programme.

Macron told Rouhani he wanted to "preserve the framework" of the accord and work towards calming tensions in the region.

"In this regard, he called on Iran to take the necessary steps to avoid any escalation of tensions," the Elysee said.

Their talks came as the UN Security Council is set in the coming days to roundly reject a U.S. resolution to extend a UN arms embargo on Iran, due to opposition from veto-wielding China and Russia.

France and its European allies themselves also back an extension of the embargo but Iran has angrily countered that the move is a key part of the nuclear deal.

The ban on selling weapons to Iran is set to be progressively eased from October under the terms of Resolution 2231, which blessed the Iranian nuclear deal.

In June, Britain, France and Germany said they opposed lifting the UN arms embargo, arguing it would "have major implications for regional security and stability."