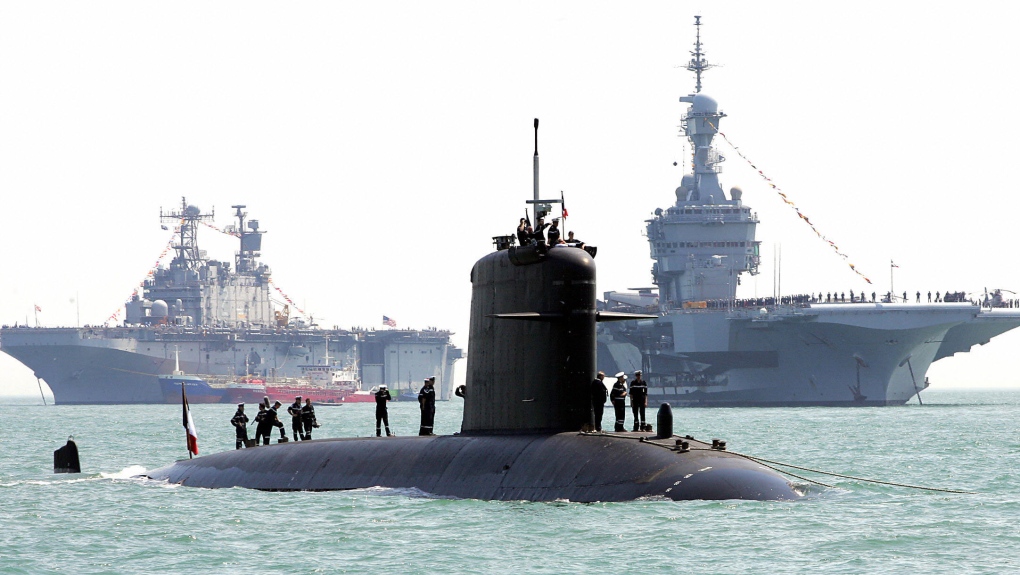 The French submarine Perle is seen in Portsmouth, UK, in 2004. (Alessandro Abbonizio/AFP/Getty Images via CNN)

A French nuclear-powered submarine severely damaged by fire last year has been saved from the scrapyard -- by cutting it in two and welding the salvageable half to part of another decommissioned sub.

An intense 14-hour-long accidental fire on the attack submarine Perle while it was in dry dock for repairs last June left the front section of the boat unusable, according to the French Defense Ministry. It suffered structural damage to steel components that could not be repaired.

But the rear half of the 241-foot-long (73 metres) submarine, which has a displacement of 2,600 tons, was not damaged during the fire at a shipyard in Toulon, southern France.

Luckily for the French navy, one of the Perle's sister boats, the Saphir, which was retired from service in 2019, was awaiting dismantling at a shipyard in the northwestern port of Cherbourg.

The Saphir's front section was structurally sound, and French officials determined it could be mated with the rear of the Perle to make one serviceable attack submarine.

The damaged Perle was moved from Toulon to Cherbourg on a semi-submersibile ship in December.

Workers cut the Perle in half in February and did the same to the Saphir in March, according to a news release from French shipbuilder Naval Group.

At the beginning of this month, the back half of the Perle and the front half of the Saphir were put on "walkers" at the Cherbourg shipyard so they could be carefully aligned and then welded together, the Naval Group release said.

Naval Group spokesperson Klara Nadaradjane said the joining work would be completed in the coming months.

The resulting submarine, which will still be called the Perle, will be about four-and-a-half feet (1.4 meters) longer than either of its predecessors to accommodate a "junction area" while the miles of cables and pipes that run through the sub will be spliced together, the release said.

The junction area will also provide room for new living quarters, adding a bit of space for the crew of 70 submariners.

All that work will be rehearsed using a three-dimensional digital model before being attempted aboard the submarine, Naval Group said.

Nadaradjane said industry regulations did not allow the company to give a cost for the operation.

The Perle, commissioned in 1993, was the newest of what once were six Rubis-class nuclear submarines in the French fleet. The Saphir, the second boat in the class, was commissioned in 1984, serving 35 years before its decommissioning.

The Rubis-class subs are scheduled to be replaced in coming years by the new Barracuda nuclear-powered submarines, the first of which, the Suffren, was delivered to the French navy in November. But the sixth Barracuda sub isn't expected to join the fleet until 2030, so the half-and-half Perle will be needed to keep French attack sub numbers at the required six, according to Naval Group.

Franck Ferrer, programs director for the Services Division of Naval Group, said in January that the new Perle was expected to be moved back to Toulon late this year for more technical work and upgrades to its combat systems before entering the French fleet in early 2023.

"Carrying out this type of project in these circumstances, i.e. repair work that involves joining the fore and aft ends of two sister ships, is of course a first in the modern history of Naval Group," Ferrer said.

But it's not the first of its kind.

"The United States Navy did something similar to that when it replaced the bow of the damaged USS San Francisco, which ran aground on a seamount near Guam in 2005, with the bow of USS Honolulu, which was slated to be retired," said Thomas Shugart, a retired US Navy attack submarine commander.

And these kind of repairs beat starting from scratch, he said.

"For sure it would be a lot of work, but probably a lot less than building a whole new submarine," said Shugart, now a fellow at the Center for a New American Security.

Shugart said current submarine construction essentially does what the French are doing now in the Cherbourg shipyard.

"All new-construction US submarines are now built using modular construction, which is essentially putting pieces of submarine together, though clearly in a more planned-for fashion than in the case of this repaired French submarine," he said.

The rebirth of the Perle is certainly a better outcome than that experienced by another fire-damaged submarine, the USS Miami.

Torched by a disgruntled shipyard worker while undergoing repairs in Portsmouth, Maine, in 2012, the Miami would have cost too much to bring back to service and it was scrapped.

Last year, a US Navy surface ship, the amphibious assault ship USS Bonhomme Richard, was damaged by fire while undergoing upgrades in San Diego. After determining it would take up to US$3.2 billion and as long as seven years to repair it, the Navy ordered the Bonhomme Richard scrapped in November.