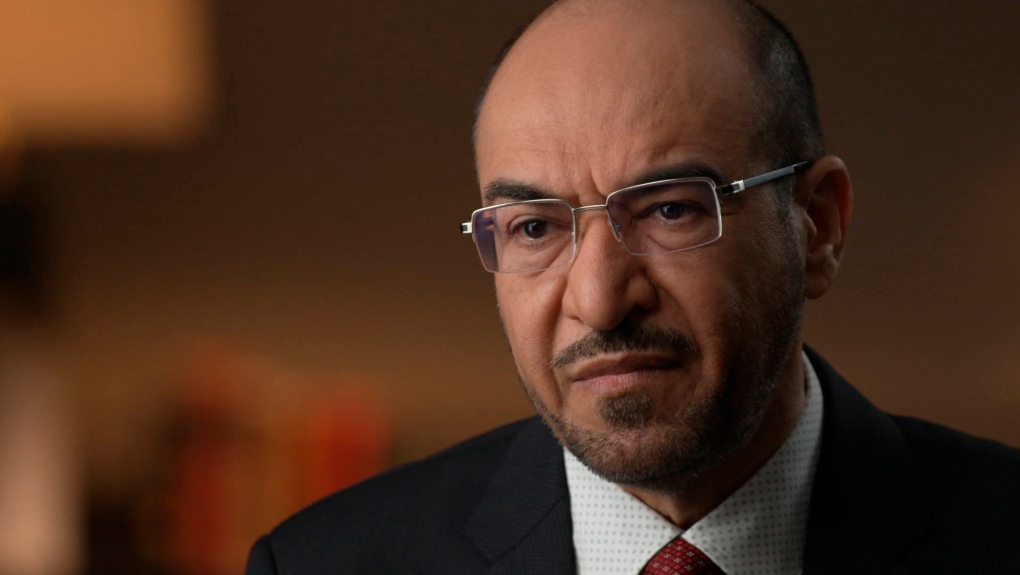 In this summer 2021 photo provided by CBS News, former senior Saudi security official Saad al-Jabri sits for an interview with journalist Scott Pelley in Washington during an interview for "60 Minutes." (CBS News/60 Minutes via AP)

WASHINGTON -- A former top Saudi intelligence official who is living in exile accused Crown Prince Mohammed bin Salman on Sunday of targeting him, and made an unprecedented public plea to the Biden administration to help obtain the release of his children jailed in Saudi Arabia.

Saad al-Jabri was long an aide to another Saudi royal, Prince Mohammed bin Nayef, whom bin Salman, or MbS, ousted as heir to the throne in a 2017 palace coup. MbS is now de facto ruler of Saudi Arabia, the world's top oil exporter and a U.S. ally.

In August 2019, Jabri, who now lives in Canada, filed a 107-page lawsuit in a U.S. court alleging that the crown prince "dispatched a "hit squad" to kill him in October 2018 and that Canadian authorities foiled the attempt.

In his first interview since leaving the kingdom, Jabri said MbS has "no empathy," and that the 36-year old leader is a threat to the people of Saudi Arabia, Americans and the rest of the world.

"I have to speak out. I am appealing to the American people and to the American administration to help me to release those children and to restore their life," a visibly emotional Jabri told CBS television's "60 Minutes" show.

The Saudi embassy in Washington and the Saudi government media office CIC did not immediately respond to Reuters requests for comment.

The "60 Minutes" Twitter account posted a statement from the Saudi embassy in Washington that said Jabri was a "discredited former government official with a long history of fabricating."

The crown prince's lawyers have rejected Jabri's allegations and said MbS has legal immunity in the United States as a foreign head of state.

FEAR OF BEING KILLED

Jabri's allegations come more than three years after Jamal Khashoggi, a Saudi-born U.S. resident who wrote opinion columns for the Washington Post critical of MbS, was killed and dismembered by a team of operatives linked to the prince in the kingdom's consulate in Istanbul.

The Saudi government has denied any involvement by the crown prince, but a U.S. intelligence report concluded in February that he had approved of an operation to capture or kill Khashoggi, although the Biden administration did not directly penalize MbS.

U.S. President Joe Biden has taken a tougher stand with Riyadh on its human rights record and the Yemen war than his predecessor Donald Trump, who had strong ties with MbS.

Jabri spent many years as bin Nayef's closest aide at the Ministry of Interior, including helping to overhaul the kingdom's intelligence and counterterrorism operations.

In January, a group of Saudi state-owned firms alleged in a lawsuit in Canada that Jabri embezzled billions of dollars of state funds while working at the Ministry of Interior.

Jabri denied stealing any money, saying he had served Saudi royals for two decades and they had been "very generous" under a tradition whereby "they take care of people around them."

The Saudi embassy statement to "60 Minutes" said reforms led by Prince Mohammed have "put an end to this type of gross corruption."

In the interview, Jabri said he had recorded a video revealing more information that could be released should he be killed. "I expect to be killed one day because this guy will not rest off until he sees me dead," he said.