For sale: Nevada town at a reduced price of $8M 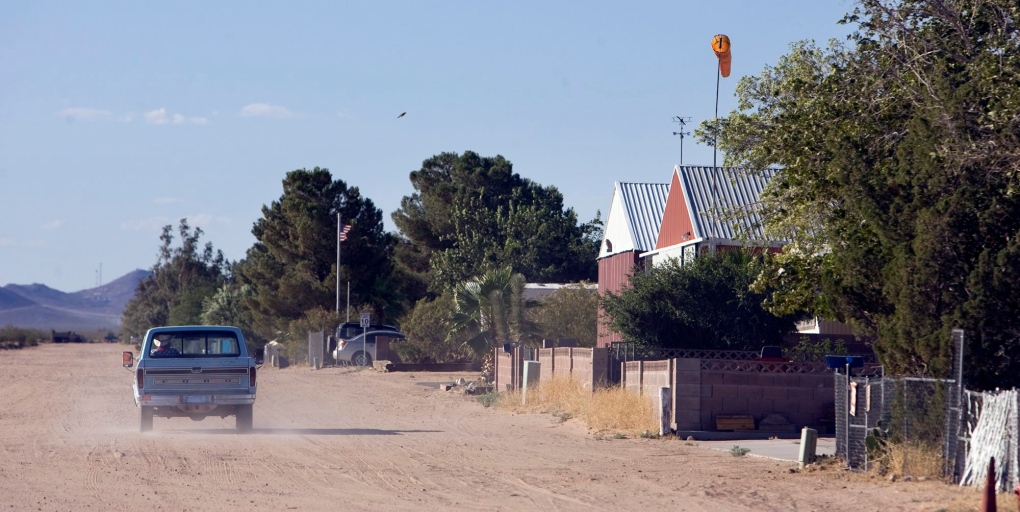 Joe Blair drives past private homes and airplane hangars Wednesday, July 7, 2010, in Cal-Nev-Ari, Nev., a town of about 300 residents 70 miles south of Las Vegas on U.S. Highway 95. Much of the town is for sale including a casino, motel RV and mobile home park, residential lots and vacant land. (AP Photo/Las Vegas Review-Journal, K.M. Cannon)

CAL-NEV-ARI, Nev. -- Buying your own town is as easy as buying 500 acres of vacant land located just 70 miles south of Las Vegas from the founder of a place called Cal-Nev-Ari.

Nancy Kidwell is offering the entirety of her town for just $8 million. She tried to sell the property in 2010 for $17 million but couldn't find any buyers. Now the 78-year-old has dropped the price and is including Cal-Nev-Ari's casino, diner, convenience store, 10-room motel, RV park and mile-long dirt airstrip in the deal.

The only things not for sale are the residents themselves, some privately owned homes, the small community centre and a volunteer fire station built by Clark County

Kidwell and her husband, Slim, founded the town in 1965 when it was just an empty swath of land along U.S. 95. Now it is home to about 350 people, but Kidwell said she can't sustain it. Slim died in 1983 and her second husband died in 2011, leaving the bulk of maintaining the town to her.

"It's time for someone else to do something with it," the 78-year-old said. "Fifty-one years is long enough."

Listing broker Fred Marik said the main value of the property is land and that the businesses are "just breaking even." He said he is advertising the town as a blank canvas. It doesn't have paved roads, but it does have deep-water wells, a sewer system and a utility company.

When real estate was a hot commodity, investors bought land in rural towns outside Las Vegas -- Kidwell said she once had two people get into a bidding war for the town -- but when the economy crashed interest died down.

Marik said he has received a few inquiries so far, with prospective buyers considering the land for a retirement community, a renewable energy project, a motorsports park, a dude ranch, a survival school, a shooting range or a "marijuana resort," if that were to become legal.

"You're basically buying the land and the opportunity to grow something on it," Marik said.

Resident Kate Colton, who has lived in Cal-Nev-Ari for about 20 years, said she's happy that Kidwell is trying to move forward with her life. She said a marijuana business would be "a little scary," but that new investors are probably a good thing for the community.

"The economy here could use a boost," she said.