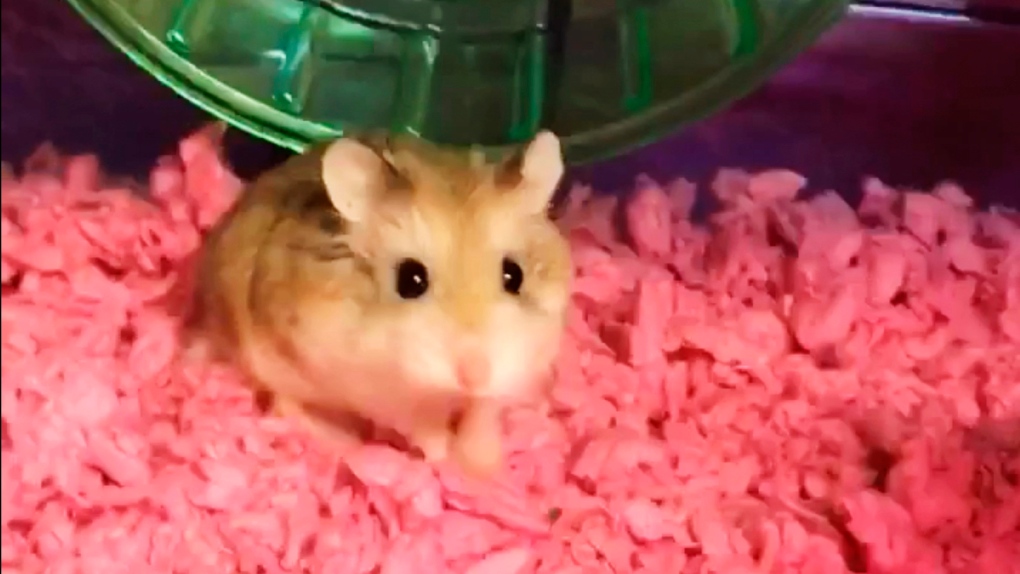 MIAMI -- A Florida woman says an airline told her to flush her hamster down an airport toilet because the emotional support rodent wasn't allowed to fly with her.

The Miami Herald reports before Belen Aldecosea flew home from college to South Florida, she twice called Spirit Airlines to ensure she could bring Pebbles, her pet dwarf hamster. No problem, the airline said.

But when Aldecosea arrived at the Baltimore airport, Spirit refused to allow the animal onboard.

The 21-year-old told the paper she flushed Pebbles at an airline employee's suggestion, after running out of other options.

Panicked and needing to return home promptly to deal with a medical issue, Aldecosea was unable to rent a car and agonized for hours.

"She was scared. I was scared. It was horrifying trying to put her in the toilet," Aldecosea said. "I was emotional. I was crying. I sat there for a good 10 minutes crying in the stall."

A spokesman for Spirit acknowledged the airline mistakenly told Aldecosea that Pebbles was allowed. But he denied that a Spirit employee recommended flushing her pet in an airport restroom.

"To be clear, at no point did any of our agents suggest this guest (or any other for that matter) should flush or otherwise injure an animal," spokesman Derek Dombrowski said.

We can say confidently that at no point did any of our agents suggest this Guest (or any other for that matter) should flush or otherwise injure an animal. It is incredibly disheartening to hear this Guest reportedly decided to end her own pet’s life.

But Aldecosea said she's considering suing Spirit over the conflicting instructions that pressured her into making the decision.

She shared her tale with the newspaper after the story of an emotional support peacock -- denied entrance to a United Airlines flight -- went viral on the Internet.

This case is different, said her Florida attorney, Adam Goodman. "This wasn't a giant peacock that could pose a danger to other passengers. This was a tiny cute harmless hamster that could fit in the palm of her hand," he said.

Animals on flights have become controversial. Some say travellers are taking advantage of federal law to get household pets on planes. Several airlines have recently tightened restrictions on such animals.

The U.S. Transportation Safety Administration has no problem with carry-on hamsters. "Hamsters are welcome in our checkpoint. Their container would typically go through the X-ray while the owner would hold the hamster as the passenger walks through the metal detector so the creature is not subjected to radiation," according to TSA spokeswoman Sari Koshetz.

It's up to airlines whether they allow hamsters on board. Most major carriers such as American, Delta and United, say no, citing concerns safety and health concerns.

Aldecosea said she had her doctor's letter certifying Pebbles.

During her first semester at a school in Pennsylvania, Aldecosea developed a painful growth in her neck, leading to a cancer scare. That's when she bought Pebbles for comfort. In November, Aldecosea learned the growth was benign, but still painful. Withdrawing from school and going home hoping to have it removed, Aldecosea booked a Spirit flight from Baltimore to Fort Lauderdale.

She twice called Spirit in advance, to verify the hamster could fly. The rep told her it was fine -- an assurance that Spirit agrees was given to Aldecosea. "Our reservation representative, unfortunately, did misinform the guest that a hamster was permitted to fly as an emotional support animal on Spirit Airlines," spokesman Dombrowski wrote in an email.

When Aldecosea showed up that day, she said, the first Spirit agent checked her emotional support pet in with no problem. Pebbles was in a small cage that fit regulations for carry-on luggage.

But as she approached the security checkpoint, a second Spirit employee chased her down, hollering that rodents weren't allowed. Aldecosea said Spirit agents told her she couldn't put the hamster in the cargo hold either.

After hectic discussions, an outraged Aldecosea accepted a flight later that day. She said she had no friends or family in town to pick up Pebbles. It was then, Aldecosea insists, that an employee suggested letting Pebbles go free outside or flushing her down the toilet.

With her flight boarding soon, she pondered whether to let Pebbles free outside. She said she considered it more humane to end her life right away, and not let her run around scared in the cold, only to die getting hit by a car.

"I didn't have any other options," she said.