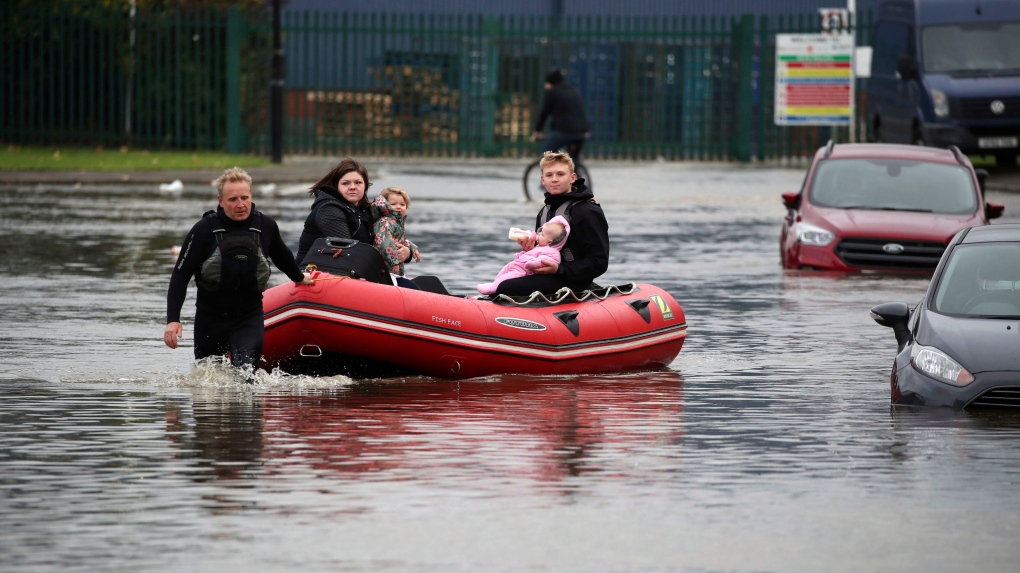 A young man feeds a child a bottle of milk as his father pulls an inflatable boat they have been using to rescue residents trapped by floodwater in Doncaster, northern England, Friday, Nov. 8, 2019. (Danny Lawson/PA via AP)

LONDON -- British political leaders swapped blame Saturday over floods that have drenched parts of England as the deluge became an issue in the campaign for the Dec. 12 election.

Opposition Labour Party leader Jeremy Corbyn visited areas of south Yorkshire in northern England that were soaked by overflowing rivers after as much as 4.4 inches (112 mm) of rain -- more than a month's worth -- fell in one day. One woman died when she was swept away by floodwaters.

Corbyn said the Conservative government had "failed to prepare communities by investing in flood prevention."

"This is what a climate and environment emergency looks like," he said. "Every year we don't act means higher flood waters, more homes ruined and more lives at risk."

Prime Minister Boris Johnson visited the area on Friday, and insisted the government was investing in flood defences.

"We are seeing more and more serious flooding -- perhaps because of building, almost certainly because of climate change," Johnson said. "We need to prepare and we need to be investing in those defences, and that's what this government is doing."

The prime minister annoyed some locals by saying that the flooding "is not looking like something we need to escalate to the level of a national emergency."

Johnson pushed for the December election -- taking place more than two years early -- in the hope of breaking Britain's political impasse over Brexit.

All 650 seats in the House of Commons are up for grabs. Johnson says that if voters give the Conservatives a majority he will "get Brexit done" and take the U.K. out of the European Union by the current deadline of Jan. 31.

Labour says it will negotiate a new divorce deal with the EU and then let voters decide between leaving on those terms and remaining in the bloc.

Both Conservative and Labour campaigns have been rattled by a series of contentious or offensive remarks by candidates, several of whom have resigned.

One prospective Conservative candidate quit the race Thursday over his 2014 comment that women should "keep your knickers on" to avoid being raped.

The party was also accused of watering down a promise to hold an inquiry into anti-Muslim prejudice in Conservative ranks. Johnson said Friday that the probe would be "a general investigation into prejudice of all kinds."

Labour, meanwhile, is facing faced renewed allegations that it has become hostile to Jews under Corbyn, a long-time supporter of the Palestinians. Corbyn has denied it, describing anti-Semitism "a poison and an evil in our society."

"The behaviour of the hard-Left within the Labour Party - the anti-Semitism, the thuggery, the irrational views on security and international issues, and the lack of realization that you have to embrace a big tent of people in order to win - certainly makes me despair," Blunkett wrote in Saturday's edition of the Daily Telegraph newspaper.

In the latest sign that Brexit uncertainty is destabilizing the country, credit rating agency Moody's downgraded Britain's outlook from stable to negative on Friday.

It said Brexit had caused "inertia and, at times, paralysis" that had undermined Britain's institutional strength. Moody's did not lower Britain's Aa2 rating, but said the U.K. economy could be "more susceptible to shocks than previously assumed."