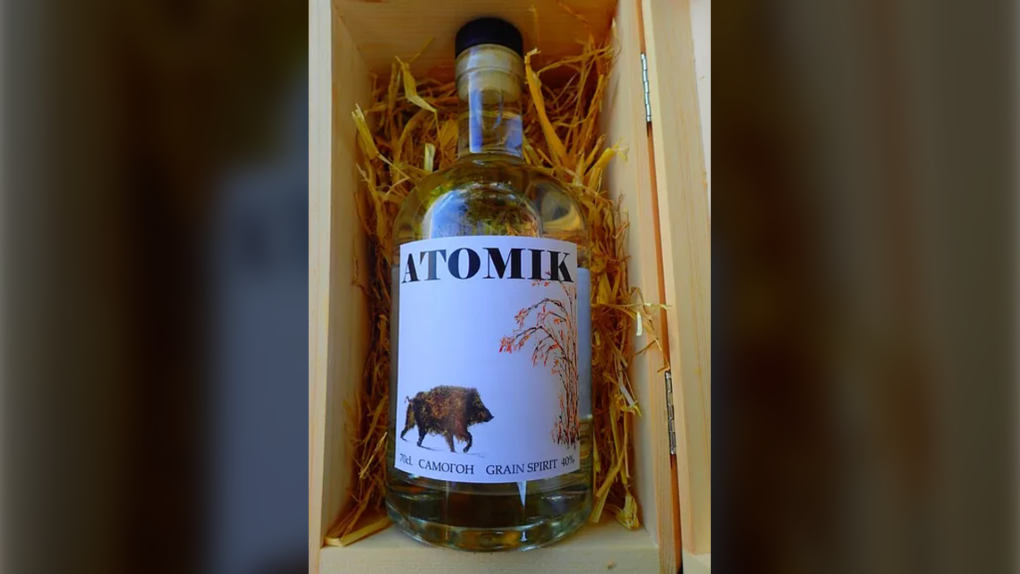 A bottle of ATOMIK grain spirit is seen in this undated image. (atomikvodka.com)

TORONTO -- The first shipment of a spirit drink made from apples grown near the Chernobyl nuclear plant have been seized by Ukrainian security services for unknown reasons, according to the company that produces it.

On Thursday, the Chernobyl Spirit Company announced that the first batch of 1,500 bottles of their “ATOMIK” Apple Spirit had been recently confiscated by Kyiv City Prosecutors following an investigation by Ukrainian secret services (SBU).

The shipment, which was bound for the U.K., was seized soon after it left the distillery in Ukraine, the company said.

“It seems that they are accusing us of using forged Ukrainian excise stamps, but this doesn’t make sense since the bottles are for the U.K. market and are clearly labelled with valid U.K. excise stamps,” Jim Smith, a professor of environmental science at the University of Portsmouth in the U.K. who started the company with Ukrainian colleagues, said.

According to their website, the Chernobyl Spirit Company is a social enterprise that aims to produce high-quality spirits made with crops from the nuclear disaster exclusion zone.

The exclusion zone is a more than 4,000-square kilometre area around the Chernobyl nuclear power plant that was abandoned due to fears of radioactive contamination in the wake of the devastating nuclear accident there in 1986.

The event is considered to be the world’s worst nuclear disaster and exposed millions of people to dangerous levels of radiation in large swathes of Ukraine and neighbouring Belarus.

Smith and his colleagues have spent years studying the transfer of radioactivity to crops within the main exclusion zone and in the Narodychi District within the “Zone of Obligatory Resettlement,” which is where people are allowed to live on the land, but not use it for agriculture.

The apples used in the drink confiscated by authorities were grown in the Narodychi District, according to the Chernobyl Spirit Company.

The researchers began producing experimental crops in the exclusion zone to demonstrate the land could still be used to produce safe food, which would provide economic benefit to the surrounding communities still recovering from the disaster more than three decades later.

They created the Chernobyl Spirit Company after they discovered that slightly radioactive products from the zone could be distilled to make spirits with nearly undetectable radioactivity levels.

“We are working hard to set up a business to help bring jobs and investment to the Chernobyl affected areas of Ukraine and to further support the community with 75% of any profits we make,” Smith explained.

Dr. Gennady Laptev, one of the company’s co-founder and a Chernobyl “liquidator” who was sent in to fight the fire and clean up contamination during the first weeks of the disaster, said he hopes their work can continue in light of the shipment hold up.

“We hope this issue can be resolved so that we can continue our work trying to help people affected by the devastating social and economic impacts Chernobyl had on communities,” he said.