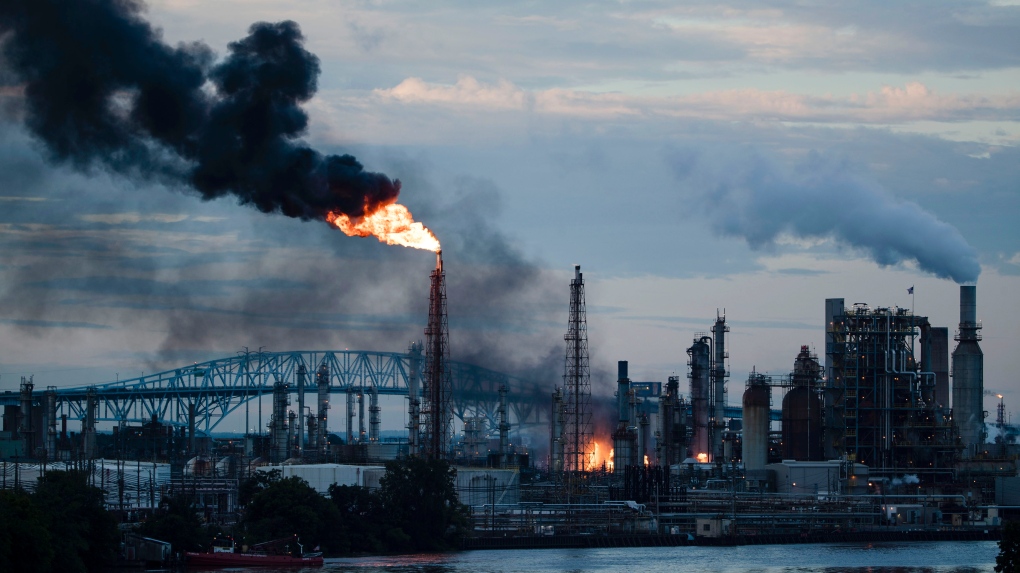 PHILADELPHIA -- A fire and explosions at the largest oil refinery on the East Coast sent a massive fireball into the sky and shook nearby homes before dawn Friday, though authorities reported only a few minor injuries.

The blaze broke out at the Philadelphia Energy Solutions Refining Complex around 4 a.m., spokeswoman Cherice Corley said. News and amateur video showed the enormous orange fireball bursting into the sky about 20 minutes later.

Nearby residents were asked to stay inside, and roads around the complex were closed.

Aerial footage of the site from early afternoon showed most of the flames appeared to be extinguished but firefighters were still working.

The cause of the fire was still unclear. Corley said three explosions, felt for miles away, went off as the fire worked its way through the tangle of pipes carrying fuel across the complex. It happened at the Girard Point refinery, one of two at the PES complex in southern Philadelphia.

The company said it has not determined what exactly caught fire, but it believes it was mostly propane. Earlier, a Philadelphia Fire Department official had said the fire started in a container of butane.

It was the second blaze at the refinery this month, following a June 10 fire in which no injuries were reported.

Gasoline prices in the Northeast could go up over the next few weeks as a result of the explosion, but a price increase isn't likely to be sustained, said Claudio Galimberti, a refining analyst at S&P Global Platts.

Plant and city firefighters were cooling down nearby tanks to prevent Friday's fire from spreading.

"We're here in support of the Philadelphia Energy Solution (crews)," Craig Murphy, the city's deputy fire commissioner, told a media briefing at the site. "The fire is now different from when we got here."

Thick, black smoke billowed across the city when the fire started.

Jonathan Triboletti, of Hammonton, New Jersey, saw that smoke, plus the explosion, when he and his mother were driving to the nearby Philadelphia Airport.

"I noticed the sky light up orange ahead of us for maybe 5 or 6 seconds," he said.

Triboletti said he even felt the heat in the car.

"It kind of made our skin crawl a little bit because we didn't know what was going on. It was something you normally see in a movie theatre," he said.

It's unknown whether the explosions will cause any financial strain the oil markets.

"This is obviously not a good thing to happen in a jittery market, but U.S. refined product demand has been relatively weak," said Jim Burkhard, vice-president for oil markets at IHS Markit. "So this is a disruption, but it's probably not going to cause major problems in a market that is generally well supplied."

This story has been corrected to show that Philadelphia Energy Solutions processes crude oil, not produces it.

Just witnessed this explosion heading to Philly airport.. praying no one was hurt pic.twitter.com/S0fcN50HaT