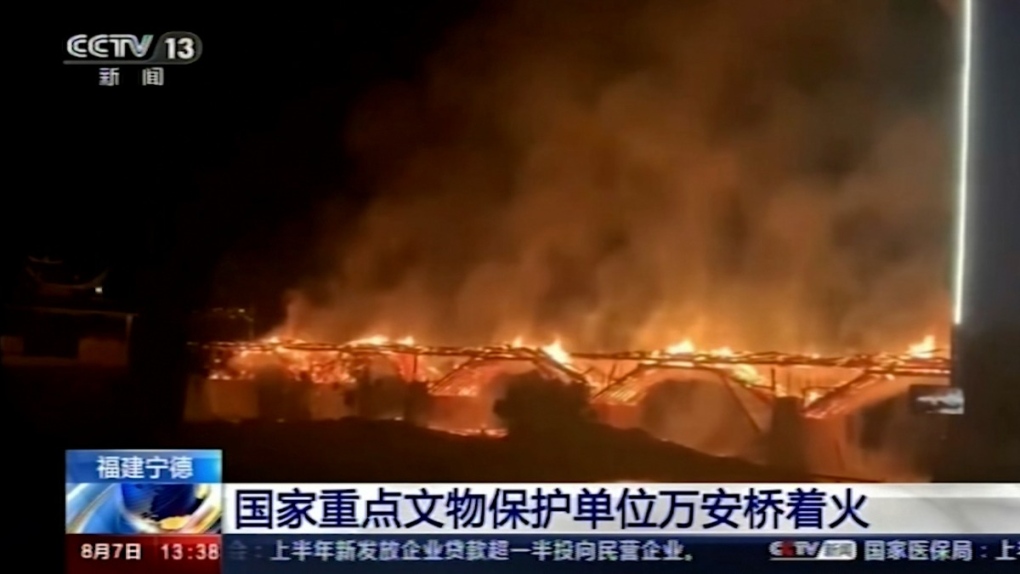 Authorities are investigating the cause of a fire that engulfed a covered wooden bridge with 900 years of history in southeastern China over the weekend.

The entire length of the Wan'an Bridge appeared to be in flames in video and photos of the Saturday night fire in Fujian province's Pingnan county. No one was reported injured in the blaze.

The 98-metre (323-foot) bridge is the longest of its kind in China. It has been rebuilt many times over the centuries, most recently in 1932. The wooden structure, standing on five stone pillars, crosses a river and had a roofed, open-air walkway.

The original bridge was built during the Song dynasty.

What each province, territory is doing on National Day for Truth and Reconciliation

Friday is the second annual National Day for Truth and Reconciliation, also known as Orange Shirt Day. The federal government made Sept. 30 a statutory holiday for its workers and federally regulated workplaces last year.

Russian President Vladimir Putin signed treaties Friday for an illegal annexation of occupied Ukrainian territory in a sharp escalation of his seven-month invasion of Ukraine. Its leader immediately countered with a surprise application to join the NATO military alliance.

The Conservatives' cheeky term for inflation under the Liberals has got some MPs into trouble in the House of Commons, where saying 'Justinflation' has been deemed verboten.

A revived Hurricane Ian set its sights on South Carolina's coast Friday and the historic city of Charleston, with forecasters predicting a storm surge and floods after the megastorm caused catastrophic damage in Florida and left people trapped in their homes.

Memphis teacher Eliza Fletcher died from a gunshot wound to the back of her head, autopsy reveals

Eliza Fletcher, the Memphis teacher who was abducted while on an early morning jog earlier this month, died from a gunshot wound to the back of her head and blunt force injury, according to an autopsy report.

Ceremonies, marches and other gatherings are taking place across the country today as communities mark the National Day of Truth and Reconciliation.