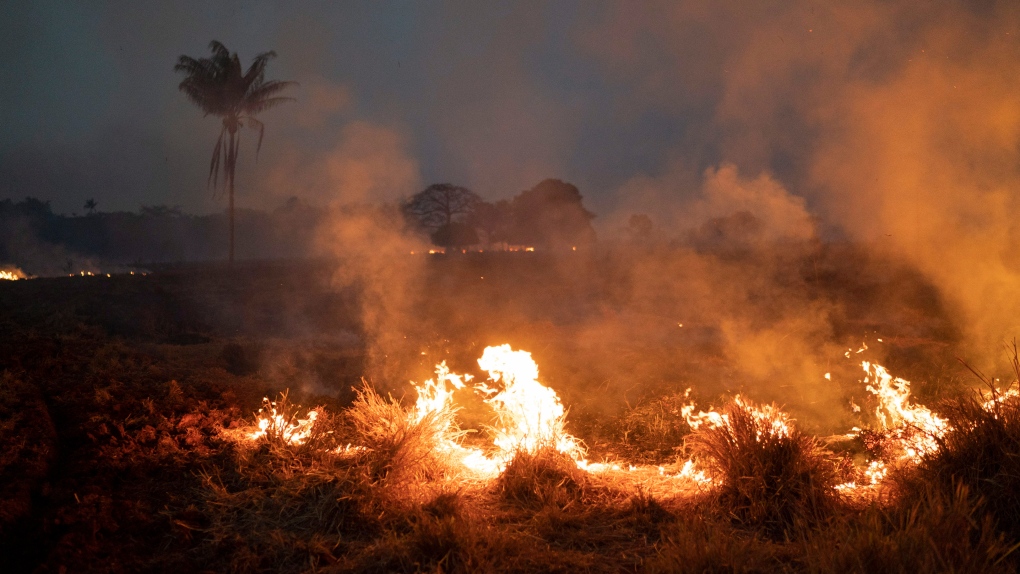 A fire burns a field on a farm in the Nova Santa Helena municipality, in the state of Mato Grosso, Brazil, Friday, Aug. 23, 2019. (AP Photo/Leo Correa)

RIO DE JANEIRO -- A member of the Brazilian indigenous group known for its forest guardians who fight illegal deforestation in their territory was killed Tuesday, marking the fifth slaying of a Guajajara tribesman since November.

The body of Zezico Guajajara, a teacher who had repeatedly denounced illegal logging, was found shot on a road near his village in Maranhao state, the state's human rights secretary said on its social media accounts. The Guajajara live within the Arariboia Indigenous Territory.

"We lost another warrior, a great leader of the Guajajara people," Sonia Guajajara, a tribe member and executive co-ordinator of the Association of the Indigenous Peoples of Brazil, said in a statement. "Our lives and our fight matter! Zezico's death will not be in vain, every warrior who falls, many more rise up!"

The federal government's indigenous affairs agency, Funai, said it had alerted Brazil's federal police and Maranhao's public security secretariat and added that it was willing to collaborate with investigations into the indigenous leader's death.

Ana Paula Vargas, Brazil program manager for the non-government group Amazon Watch, said in a statement that Zezico had been "a marked man" by logger, and that she suspected his killing was linked to recent killings of indigenous people by those who invade their lands.