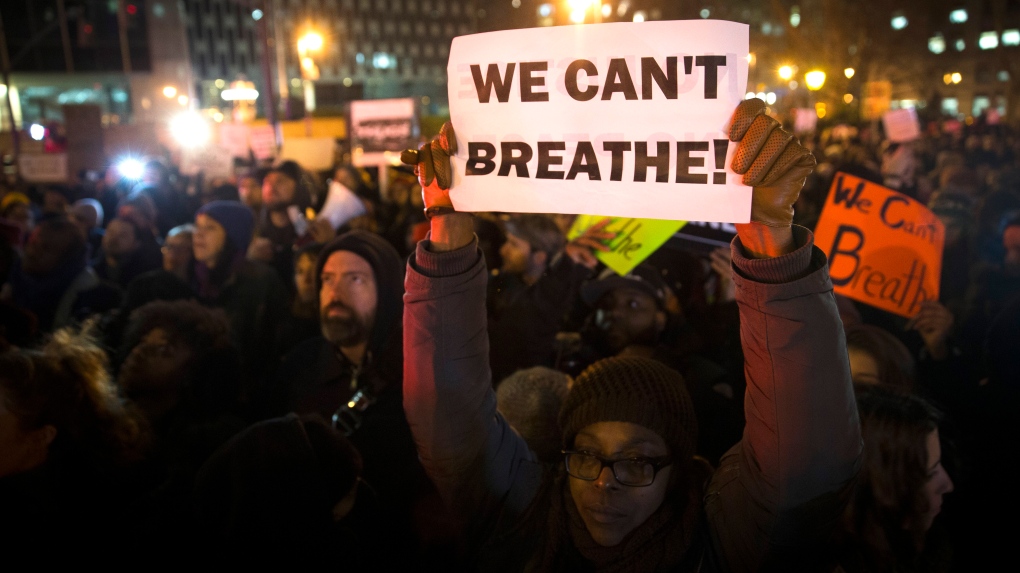 Demonstrators participate in a rally against a grand jury's decision not to indict the police officer involved in the death of Eric Garner, Thursday, Dec. 4, 2014, in New York. (AP / John Minchillo)

NEW YORK -- After nearly five years, federal authorities are signalling they may have concluded their investigation into the death of Eric Garner, the unarmed black man heard on video crying "I can't breathe" after a white New York City police officer put him in an apparent chokehold.

The office of the U.S. attorney in Brooklyn, Richard Donoghue, said late Monday that he was planning a news conference to discuss Garner at 11 a.m. Tuesday.

Garner's family and the Rev. Al Sharpton said they were scheduled to meet with prosecutors at 10 a.m. and would also address the media afterward.

The U.S. Justice Department faces a deadline Wednesday, the fifth anniversary of Garner's death, to decide whether to file civil rights charges against Officer Daniel Pantaleo or others involved in the fatal arrest on a Staten Island sidewalk. The statute of limitations on most federal charges is five years.

That probe is still open. A few dozen activists, angry that the investigation hasn't been resolved, travelled by bus Monday from New York to Washington to protest outside Justice Department headquarters.

"They are going to let the clock run out, like cowards," predicted Hawk Newsome, the head of the Black Lives Matter chapter for the greater New York City area, who helped lead the demonstration.

Another rally is planned for Tuesday on the steps of New York's City Hall. Sunday, Sharpton joined Garner's family for a vigil at his grave in New Jersey. Together, they chanted: "We want justice, amen."

Protesters have demanded that Pantaleo face criminal charges, but the Justice Department has other options as well, besides simply closing the case.

In 2015, it concluded its investigation into the fatal police shooting of Michael Brown, an unarmed teenager in Ferguson, Missouri, by issuing a lengthy report condemning the city's police force and court for a pattern of unconstitutional practices, including stopping and arresting black residents without cause. No officers were charged.

That investigation, which involved examination of 35,000 pages of police records, took less than a year.

The Garner probe has now outlasted the tenures of three attorneys general under two presidents.

"It's shocking that it's taken this long for the department to come to a prosecutorial decision," said Jonathan Smith, who led the special litigation section of the Justice Department's Civil Rights Division from 2010 to 2015 but was not involved in the Garner case.

The police department put his disciplinary case on hold for years, citing the federal investigation, but decided to move forward last year. Pantaleo has denied using any inappropriate force in trying to subdue Garner.

An administrative judge who presided over Pantaleo's internal disciplinary trial in the spring has yet to submit her findings to the police commissioner, who has the final say on punishment, which could range from loss of vacation days to termination.

At issue is whether Pantaleo used a chokehold, which is banned by the police department, or another restraint technique, as his lawyer has argued.

Pantaleo, 34, was stripped of his gun and badge and placed on desk duty after Garner's death.

Pantaleo's lawyer, Stuart London, said he'd prefer to remain on the force. "It's in his blood. He'd love to continue," London said.

Assistant U.S. Attorney Elizabeth Geddes, the head of the civil rights division of the federal prosecutors' office in Brooklyn, sat in the audience for part of the disciplinary trial, but left when Pantaleo's lawyer said he wouldn't testify.

The department trial, spread over several weeks in May and June, included never-before-heard testimony from other officers involved in Garner's arrest and a medical examiner, who ruled that the chokehold set into motion "a lethal sequence of events."

Cell phone video shot by Garner's friend, Ramsey Orta, showed Pantaleo taking Garner to the ground after he and another officer confronted him over suspicions he was selling loose cigarettes. Before Pantaleo grabbed him, Garner is seen on video arguing with the officers, protesting what he considered constant harassment.

Garner weighed 395 pounds (179 kilograms) at the time of death and suffered from asthma, diabetes and had a heart nearly double the size of a person in good health, a medical examiner said.

If Pantaleo isn't charged, Newsome said protesters would "shut down New York City and encourage others to shut down cities across the county."

"Somebody's got to feel it," he added. "We've got to make people feel the discomfort that we feel daily."