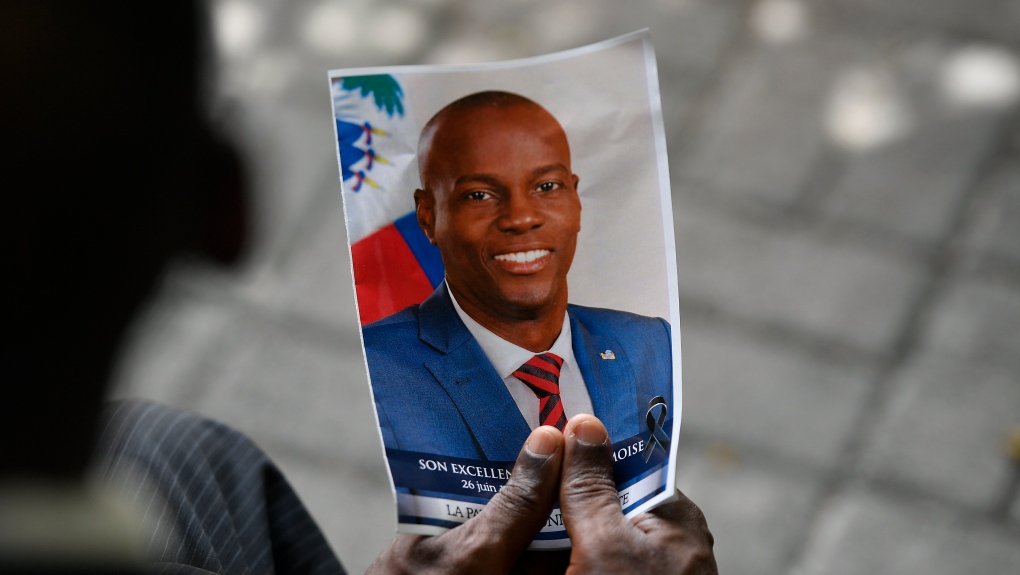 A person holds a photo of late Haitian President Jovenel Moise during his memorial ceremony at the National Pantheon Museum in Port-au-Prince, Haiti, Tuesday, July 20, 2021. Moise was assassinated at home on July 7. (AP Photo/Matias Delacroix)

SAN JUAN, PUERTO RICO -- Police have detained more than 40 suspects in the killing of President Jovenel Moise, but many people fear Haiti's crumbling judicial system could result in the assassination going unpunished.

Interrogations are continuing, while dozens of suspects, including an ex-Haitian senator and former justice official, are still at large. But the judicial process has already hit significant snags, among them death threats and allegations of evidence tampering.

Experts and even Haiti's Office of Citizen Protection, an ombudsman-like government agency, warn that the country faces many challenges to properly handle such a complicated case.

"The judicial system is held hostage by certain sectors and weakened by a disciplinary body ... that protects dishonest and corrupt judges but persecutes, through bogus human rights NGOs, those who are honest," the agency said in a Sunday statement.

Brian Concannon, an adviser for the Institute for Justice and Democracy in Haiti, said he worries about "so much intentional misdirection" as the Moise investigation moves forward.

"The big issue is are you going to have a structure that can deliver the truth?" he said. "It's possible there are good people that are getting at the truth, but there is enough misdirection, intimidation (and) people apparently manipulating evidence. ... I'm not confident that we're getting closer to the truth with the current process."

Haiti's Office of Citizen Protection noted that 32 high-profile killings dating from 1991 have never been resolved, including those of former government officials, lawyers, academics and journalists. It also accused corrupt judges of freeing suspects arrested by police, noting that in the past two decades there has been no significant criminal process in well-known murder cases.

The agency urged judicial officials, especially Haiti's chief prosecutor, "not to be intimidated by the pressure or the unfair maneuvers of individuals of all stripes who want at all costs to sabotage the investigation into the assassination of President Jovenel Moise in order to reinforce the phenomenon of impunity in Haiti."

Bedford Claude, the Port-au-Prince prosecutor overseeing the case, did not return messages for comment.

A recent report submitted to the United Nations Human Rights Council condemned what it called chronic impunity in Haiti and the lack of an independent justice sector.

"The judiciary remains in a state of chronic dysfunction," the report said, blaming increased political interference, threats against judicial officials and lack of resources among other things. "Corruption is rampant and there are clear indications of the judiciary acting to vindicate political and other ends, rather than those of justice."

The report said Haiti's judicial system remains marred by lengthy pretrial detentions and paralyzed by the government's failure to pay the salaries of clerks and other workers. It also accused authorities of failing to adequately protect judicial officials.

Among those investigating Moise's killing who have received death threats is Carl Henry Destin, a justice of the peace who told the AP that he has gone into hiding. He declined to provide other details, including how the threats might be hampering the investigation into the July 7 attack at Moise's private home in which his wife, Martine Moise, was seriously wounded.

Another targeted official is court clerk Marcelin Valentin, who filed a complaint July 20 with the chief prosecutor saying he received serious death threats by phone. He said that in one two days after the assassination, a caller threatened to kill him if he didn't modify names and statements in his report.

One of the messages he received in Creole translates roughly to: "Clerk, you've got a bullet to the head waiting for you."

Valentin said the threats forced him to remain in hiding and stay away from his office.

"My family is obligated to take a forced vacation out of fear that something bad will happen to them," he said in the report.

Deaths threats issued during the investigation of high-profile slayings in Haiti is nothing new. In one recent case, a judge overseeing the 2020 killing of Monferrier Dorval, head of the bar association in Port-au-Prince, went into hiding out of fear for his life. The case has since been at a standstill.

Among the significant challenges in Dorval's case are the theft of evidence from the crime scene and from the courthouse, and there are worries that could be repeated in the Moise investigation.

Haitian authorities have not disclosed what kind of evidence they have collected in the president's slaying with the help of the FBI, and they have released only limited details at news conferences during which they have largely refused to take questions.

Among those arrested are 18 former Colombian soldiers. The government of Colombia has said the majority of them were duped and did not know about the real operation that was brainstormed in Florida and Haiti.

A growing concern is where the soldiers and other suspects arrested in the case are being held. A June 2021 report issued by the United Nations Integrated Office in Haiti said that more than 80% of detainees in the country's extremely overcrowded prisons have not been tried and that most live in cells without proper ventilation or clean water and get one daily ration of food and have limited or no access to health care.

"The conditions of detention ... represent a situation of torture or cruel, inhuman or degrading treatment," the report said.

On Tuesday, Colombia's government said the detained soldiers needed urgent medical care. It said an official mission to Haiti found they were constantly in handcuffs and some were tired and had lost weight: "One of them was limping and the other couldn't stand up by himself and had to be helped by his colleague."

Another concern are the upcoming Haitian presidential and legislative elections, which newly installed Prime Minister Ariel Henry has pledged to hold as soon as possible as he promised to bring to justice all those responsible for Moise's murder. The first round of voting had been scheduled for late September before Moise was killed, and it is unclear if the date will change.

Concannon, adviser for the Institute for Justice and Democracy in Haiti, said the outcome of the Moise investigation could depend largely on whether the candidate elected is "somebody who has the mandate and ambition to really get to the truth of this."