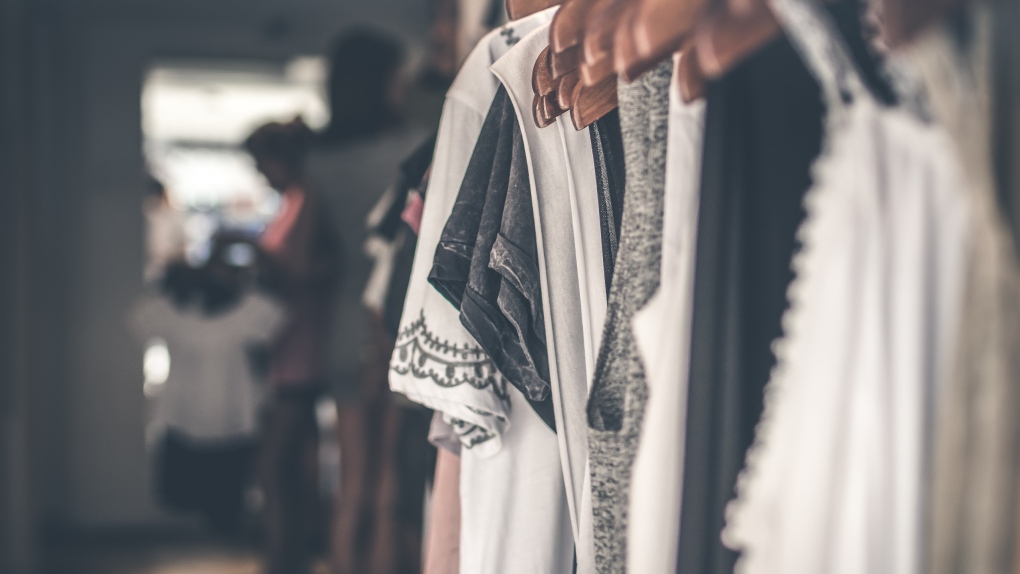 A file image of clothes on a rack (Artem Beliaikin/Pexels)

TORONTO -- A New York City-based fashion school has apologized after a model booked to walk in their fashion show complained that the accessories she was asked to wear on the catwalk were racist.

Models were asked to wear exaggerated ears, lips and bushy eyebrows for the Fashion Institute of Technology’s MFA show during a New York Fashion Week showcase in Manhattan on Feb. 7.

One model, named in local reports as Amy Lefevre, refused to wear the accessories she deemed “racist,” and walked the show without them.

Jonathan Kyle Farmer, chair of the modern fine arts fashion design course responsible for the fashion show, apologized in an Instagram post directly to Lefevre, writing “I deeply apologize for any harm and pain I’ve caused to those involved with the show, including Amy LeFevre.”

In an official message posted to the school’s website, Joyce Brown, president of the Fashion Institute of Technology, wrote “currently, it doesn’t appears that the original intent of the designs, the use of accessories or the creative direction of the show was to make a statement about race.”

“However, it is not glaringly obvious that has been the outcome,” she continued. “For that we apologize.”

Brown said that there is currently an investigation into “how this happened.”

The fashion world has long courted backlash for styles and advertising campaigns that feature racist imagery or themes.

Dolce and Gabbana’s November 2018 ad campaign featuring a Chinese model struggling to eat pasta and pizza with chopsticks was met with derision in China, with many consumers calling for a boycott of the luxury designer’s products.

The ads were eventually pulled and the fashion house apologized.

In February of last year, Gucci was widely criticized for unveiling a sweater that ‘resembled blackface,’ as was a Katy Perry shoe design and a Prada set of accessories. All of the brands involved have since apologized.

It shouldn’t be down to the models to have to refuse wearing blatantly racist accessories on the runway, especially not in a show thrown by an institution like @fitnyc. In an alumni show celebrating their 75th anniversary, MFA graduate Junkai Huang showed a collection that was meant to highlight the “ugly features of the body”. The choice of exaggerated bright red fake lips and “monkey ears”, as well as the school’s response, are leaving us shaking our heads. ⠀⠀⠀⠀⠀⠀⠀⠀⠀ Nearing a breakdown, African-American model Amy Lefevre (@lefevrediary ) spoke up about the accessories, but was told by staff it was “ok to be uncomfortable for only 45 seconds”. It’s one thing when it’s a pair of tricky heels, but quite another when you’re made up to look like racist caricatures from the not-so-distant past. Multiple complaints had been made in the days leading up to the show as well, with several people objecting. One anonymous student who was witness backstage, said the show’s producer @richardthornn told the group to “back down and get away” when they brought up the issue again. The accessories didn’t end up making it onto Lefevre, but that didn’t stop them from going down the runway on other models. ⠀⠀⠀⠀⠀⠀⠀⠀⠀ In a statement to the NY Post, FIT president Dr. Joyce F. Brown emphasized allowing the students the “freedom to craft their own personal and unique artistic perspectives as designers, to be even what some would consider to be provocative”, but said they would investigate further. ⠀⠀⠀⠀⠀⠀⠀⠀⠀ In a time when luxury brands are taking swift action by pulling offensive products and implementing diversity councils in response to similar scandals, it’s a shame to see a learning institution dragging their feet. Shouldn’t they be the ones broadening insights for the ones who will lead fashion in the future and not reinforcing the same aspects that have made the industry notoriously problematic? ⠀⠀⠀⠀⠀⠀⠀⠀⠀ • #fit #fitnyc #suny #cuny #fashionschool #college #mfa #mastersdegree #alumni #fitalumni #fashiondesigner #design #designer #runway #model #blackface #racism #monkey #grotesque #sexdoll #bodyimage #lumpsandbumps #wiwt #ootd #runwaymodel #nyfw #fashionweek #dietprada