Family of 6, including child, wounded in U.S. strike in Syria 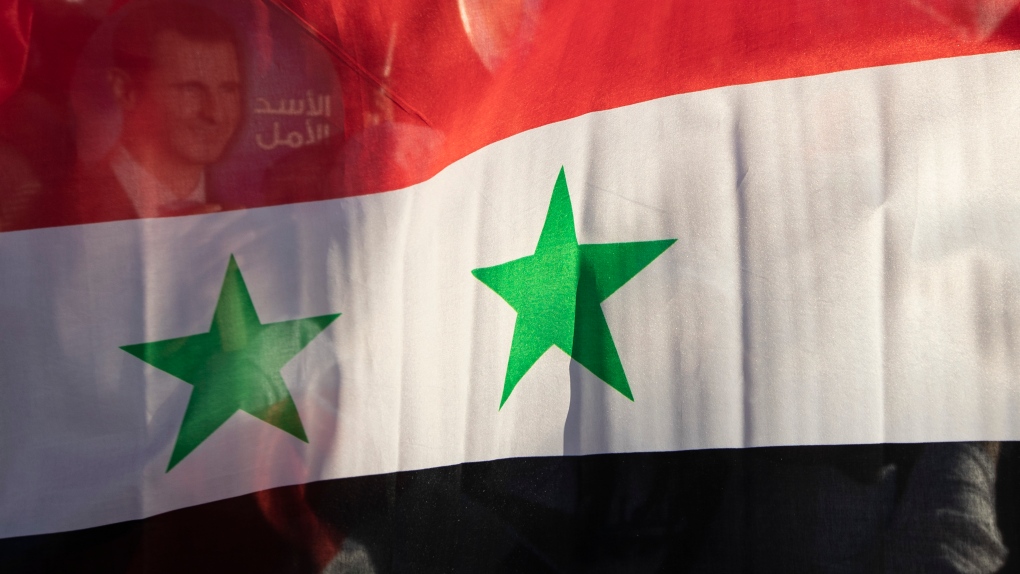 Syrian President Bashar Assad supporters hold up the national flags and pictures of Assad at a gathering at Omayyid Square in the Syrian capital Damascus , Syria, Sunday, May 23, 2021. (AP Photo/Hassan Ammar)

BEIRUT -- A U.S. airstrike targeting an al-Qaida leader in northern Syria wounded a family of six, including a 10-year-old child who suffered serious head injuries The Associated Press has learned.

Ahmad Qassim had picked up his family from his in-laws in northwestern Syria where they had spent four days and was driving back home Friday morning when an explosion occurred, riddling their vehicle with shrapnel.

Qassim, a 52-year-old farmer, his wife, two sons and two daughters suffered various wounds in the blast apparently caused by a missile fired from a U.S. drone.

The drone was targeting a man on a motorcycle that Qassim was trying to overtake, according to Qassim and first responders.

The blast occurred near the northwestern village of Mastoumeh as the family drove back home to the northern town of Afrin.

Syria's 10-year conflict has killed hundreds of thousands and left large parts of the country destroyed. The Friday morning attack occurred in Idlib province, the last major rebel stronghold in Syria and home to 3 million people, many of them internally displaced, like Qassim's family.

The U.S. military says it conducted a strike from a remotely piloted MQ-9 aircraft Friday near the city of Idlib targeting "a senior al-Qaeda leader and planner." An initial review of this strike indicates the potential for possible civilian casualties, it added.

"We abhor the loss of innocent life and take all possible measures to prevent them. The possibility of a civilian casualty was immediately self-reported to U.S. Central Command," said Capt. Bill Urban, CENTCOM spokesperson. He added: "We are initiating a full investigation of the allegations and will release the results when appropriate."

For years, the U.S. military has used drones to kill top al-Qaida operatives in northern Syria, where the militant group became active during Syria's civil war. Idlib at one point was described as having one of the largest al-Qaida concentrations since Osama bin Laden's days in Afghanistan.

Among those killed in Syria over the years were al-Qaida members who were close to the group's founder and leader.

The general would have 90 days to complete his review of that strike, which occurred as the Islamic State group was making its last stand in Baghouz, eastern Syria. The New York Times reported earlier this month that the strike in Baghouz killed up to 64 women and children.

The Observatory said the man who was killed had left the group nearly a year ago, adding that he was a Syrian citizen from the northwestern region of Jabal al-Zawiya in Idlib province. It was not clear whether he was still a fighter.

Qassim said he was overtaking the motorcycle when the explosion occurred at 9.30 a.m. local time (0730 GMT). "I briefly felt nothing after that," he told The Associated Press by telephone from Idlib.

He then jumped out of the car with minor arm and head wounds and helped his family get out of the vehicle.

People rushed from nearby homes and helped them reach a hospital even before members of the Syrian Civil Defense or White Helmets arrived, he said.

The Syrian Civil Defense confirmed in a statement on Friday that members of a displaced family were wounded in the strike.

Five family members have been discharged from the hospital but Qassim's youngest son, 10-year-old Mahmoud, remains in the intensive care unit of a hospital in the city of Idlib, where he is being treated for serious head injuries.

Qassim said doctors told him his son could have permanent difficulties moving his left arm and leg because of trauma to his brain.

Qassim's wife, Fatima Gargouh, 48, had her left leg broken while his daughters Hiba, 16, and Batoul 15, and 12-year-old son Walid suffered wounds that were not life threatening. He said one of his daughters has not been able to move since several pieces of shrapnel were removed from her body.

They are now back with Qassim's in-laws in the nearby village of Rami.

Every day, Qassim drives to Idlib, the provincial capital, 10 kilometres (6 miles) away to check on his youngest son.

Qassim's family is from the village of Kfar Bateekh, which was captured by Syrian government forces in March last year during a crushing Russian-backed government offensive on Idlib.

Qassim says all he wants now is for his son to get better and leave the hospital.

"If God cures Mahmoud, I will be well," he said.