Facing years in prison for funding 'cult-like' NXIVM, Seagram heiress still stands by the group and its founder 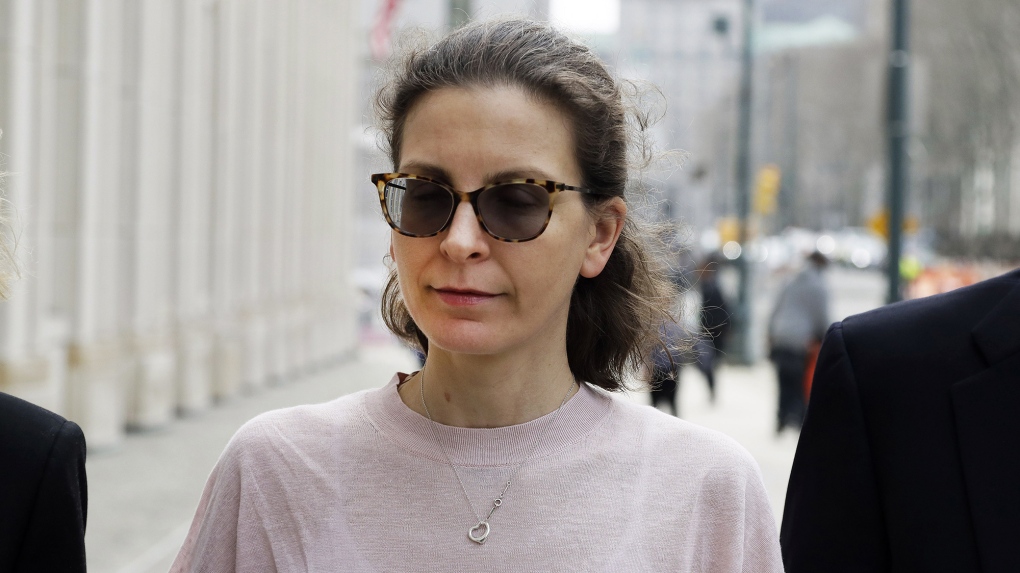 Seagram liquor heiress Clare Bronfman could be sentenced to as long as five years in prison on Wednesday.

Prosecutors say Bronfman's millions funded the self-help company NXIVM -- which they call a criminal enterprise -- as well as its founder Keith Raniere, who has been convicted of charges including sex trafficking and child exploitation.

But in the weeks before her sentencing, in a letter she wrote to a judge, Bronfman refused to disavow NXIVM -- or Raniere.

"There can be little doubt that Raniere would not have been able to commit the crimes with which he was convicted were it not for powerful allies like Bronfman," a government pre-sentencing report reads.

Bronfman, 41, pleaded guilty in April 2019 to conspiracy to conceal and harbour people who were not in the U.S. legally for financial gain -- and to fraudulent use of identification. She has spent the last two years in home confinement.

The heiress to the Seagram's liquor fortune will be the first member of NXIVM to be sentenced in the federal case that resulted in Raniere being convicted of sex trafficking, racketeering, sexual exploitation of a child and human trafficking charges.

Four other co-defendants who were high-ranking members of the organization pleaded guilty last year to racketeering charges in connection with the case.

Prosecutors say Bronfman poured tens of millions of dollars into the organization, but her defense claims, despite her financial support, she was unaware of the criminal activities of which Raniere was convicted. But in the months after former NXIVM members left the group and spoke publicly about allegations of abuse, prosecutors say Bronfman took part in trying to threaten former members into silence.

"I never believed I was supporting anything bad or wrong, I never wanted to shield anyone from criminal behaviour, I never intended to intimidate people," Bronfman wrote in an Aug. 28 letter to U.S. District Judge Nicholas Garaufis. "I did not and do not support anyone abusing or using violence towards anyone."

In court filings, Bronfman has said she is "deeply sorry" for the pain caused by the two charges to which she pleaded guilty. Defence attorneys have asked for Bronfman to be sentenced to three years of probation, saying she took "full responsibility" for what she did.

Bronfman was an executive board member for NXIVM, an Albany, New York-based company that turned Raniere's philosophies about self-improvement into intense, days-long seminars that cost participants thousands.

An entire community grew around the teachings of NXIVM, with members known as "Nxians" frequently gathering in Albany to take more classes and even celebrate Raniere on his birthday for a week-long, annual event called "V-week," after Raniere's nickname: Vanguard.

Members who spoke negatively about the group were shunned, witnesses testified in Raniere's trial. NXIVM leaders hired attorneys and private investigators to look into critics of the group.

High-ranking members of the community ranged from heiresses like Bronfman to actors.

Within NXIVM, there was a secret society of women called DOS, which prosecutors said members were lured into joining after being told it was a women's empowerment group.

Allison Mack, an actress in "Smallville," helped create a NXIVM program that was geared toward actors, and appeared in NXIVM recruitment videos. Prosecutors say she also helped recruit DOS "slaves," and she later pleaded guilty to racketeering and racketeering conspiracy charges.

Bronfman believed so strongly in NXIVM's teachings that she funneled over US$116 million into the organization, according to a prosecutors' sentencing report, often in the form of loans for investments or securing patents for Raniere's programs.

Prosecutors say that Raniere recruited people into the organization and exploited them "for power, for profit, for sex."

Prosecutors also say the women of DOS were asked to give "collateral," potentially embarrassing or incriminating documents such as nude photos or letters with confessions and even rights to financial assets in order to prevent them from disclosing details about the group, according to a sentencing memo.

The women who were recruited were known as "slaves" who had to take vows of obedience to their "masters." Unbeknownst to most of the women, the head of the secret group was Raniere himself, and some of the women were required to take nude photographs and have sex with Raniere.

Some were even branded, with Raniere's initials forever burned onto the pelvic area of their bodies. Bronfman has acknowledged that some of her closest friends were members of DOS, but claims she was unaware the secret society existed, and unaware of allegations of abuse until former members began speaking out.

Once former members began speaking publicly, prosecutors said Bronfman helped Raniere draft threatening letters that were sent to the women. "Bronfman hired a psychologist, private investigators and a public relations firm in an effort to rehabilitate the public image of DOS," a government sentencing memorandum reads.

Bronfman's defense team said in court filings that Raniere and others "continued to hide things" from her even after DOS became public, and that she found out about many details of the group during Raniere's trial. Raniere's attorney has said that his relationships with NXIVM members were consensual.

NXIVM 'GREATLY CHANGED MY LIFE FOR THE BETTER'

A window into Bronfman's mindset as she heads into her sentencing is the letter she wrote to Garaufis, who oversaw Raniere's trial and will determine her sentence.

In the letter, Bronfman apologizes over the case of an unnamed woman to whom her charges relate, but says she will not disavow Raniere or NXIVM, saying "for me, NXIVM and Keith greatly changed my life for the better."

She also wrote that she did not disavow DOS because, from the information she had, "it did not make sense for me to do so."

"I was never told about anything sexual or damaging of any nature, and I was assured by them and by professionals that: there was no harm being done; no one was being forced to do anything; and to the contrary, people were experiencing improvements in their life through their membership in DOS," Bronfman wrote.

Janja Lalich, a sociology professor who has spent decades helping people escape from and recover from being involved in manipulative groups such as cults attended Raniere's trial and has worked with multiple former NXIVM members. Prosecutors have called NXIVM a "cult-like group."

Lalich said she generally believes people who were in manipulative groups, such as cults, should be given lighter sentences if they were involved in criminal activity associated with the group.

"When you're that entrenched in something your free will is actually altered by the will of the leader.

There should be some way the courts could take that into account and perhaps lighten (a) sentence," Lalich told CNN.

But, she said, the fact that Bronfman has refused to renounce Raniere and NXIVM shows that she is still indoctrinated by Raniere and has not realized that she was manipulated.

For that reason, Lalich believes Bronfman shouldn't be given a lighter sentence.

"Clare has still not given up the ghost. Does she deserve that mitigation? Not in my opinion. I think she has to pay for what she did and she has to bite the bullet."

Part of why Bronfman said she won't disavow Raniere or NXIVM is because they helped her overcome her fears and flaws.

"For the first time in my life I wasn't afraid to be with people. I built meaningful friendships and I was surrounded by people who were seeking to improve their lives," Bronfman wrote.