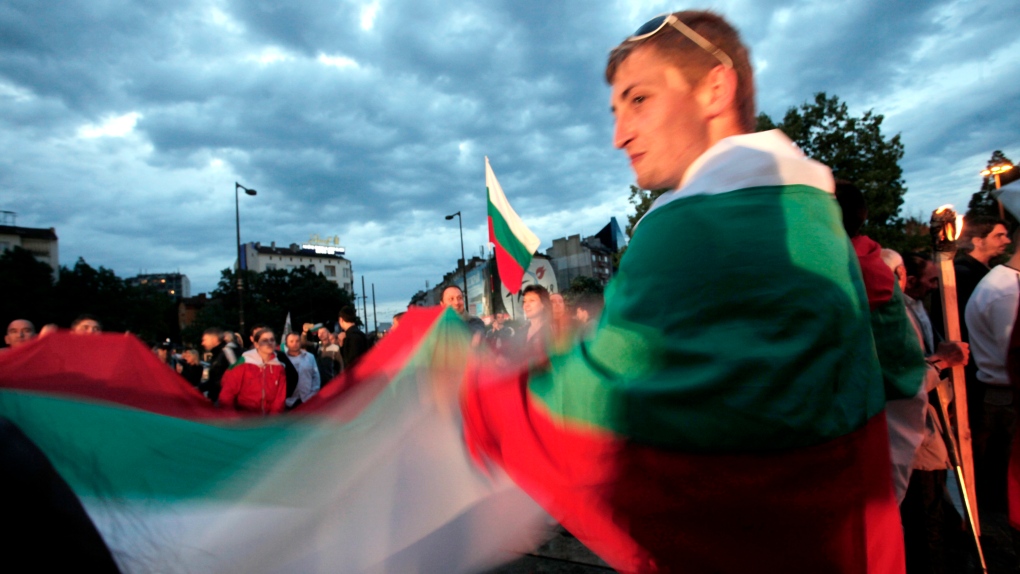 Protesters wave Bulgarian flag during a protest claiming the current parliamentary elections are not legitimate in Sofia, Sunday, May 12, 2013. (AP / Valentina Petrova)

SOFIA, Bulgaria -- Bulgaria's centre-right party and its main challenger, the Socialists, finished first and second in Sunday's parliamentary election, with neither one winning a majority needed to form a government, two exit polls indicated.

If that outcome is confirmed, it could lead to more political and economic instability in this financially strapped Balkan nation.

That was clear late Sunday when dozens of angry people clashed with police in front of the election press centre where party leaders arrived for post-election news conferences.

Disappointed with the election results and accusing the politicians with vote rigging, the protesters shouted "Mafia" and tried to storm the building but were stopped by police in riot gear who cordoned off the area.

Some 6.9 million eligible voters chose among candidates from 36 parties. But voter apathy was widespread, and allegations of vote fraud and an illegal wiretapping scandal marred the campaign.

Official results are expected on Monday.

Parties have to win at least 4 per cent of the votes to get seats in 240-seat Parliament, and three parties in addition to GERB and the Socialists are expected to do that.

That could make forming a coalition government difficult.

"I expect the country will soon head to another election," said Anton Todorov, a political analyst. His colleague Ognyan Minchev agreed, saying he sees "a risk of a hung parliament."

Bulgaria has been led by a caretaker government since February, when Borisov, who guided his Citizens for Bulgaria's European Development party -- widely known as GERB -- to victory in 2009, resigned as prime minister amid sometimes violent protests against poverty, high utility bills and corruption.

The ex-ruling party has seen its reputation tarnished further since prosecutors alleged that former Interior Minister Tsvetan Tsvetanov was responsible for illegally eavesdropping on political opponents during his term.

The scandal deepened as wiretaps leaked in the media revealed that Borisov allegedly had summoned Sofia's chief prosecutor to discuss details of the bribery probe, leading to suspicions of government interference.

But perhaps more than anything, Borisov's party had to struggle to win the public's confidence due to economic issues. Six years after Bulgaria's entry into the European Union, the Balkan state of 7.3 million remains the bloc's poorest member.

Bulgarians have been angry over austerity measures designed to reduce public debt, which have meant cuts in health care and education programs.

Many Bulgarians feel squeezed by low wages -- the lowest in the EU at 400 euros ($524) a month -- and relentless inflation. They feel betrayed by promises that joining the EU would bring them a better life. Now, more than 22 per cent of the people live below the official poverty line.

According to official statistics, the unemployment rate is 12 per cent, but experts suggest that the real rate is more than 18 per cent.

In a sign of the prevalent despair, six people set themselves on fire this year, and five died of their burns.

Allegations of vote-rigging that have accompanied elections in the past prompted five major former opposition parties to seek an independent vote count; the first such count since 1990 will be conducted by the Austrian agency SORA. More than 250 international observers monitored Sunday's election.

On Saturday, prosecutors stormed a printing house and seized 350,000 ballots that were printed over the legally fixed number.

President Rosen Plevneliev urged Bulgarians to vote in large numbers to counter possible vote-buying practices that could influence the outcome of the race.

"As many as the scenarios may be, these do not stand any chance against millions of Bulgarians who can cast their votes for their own country and its future," he said after casting his ballot.