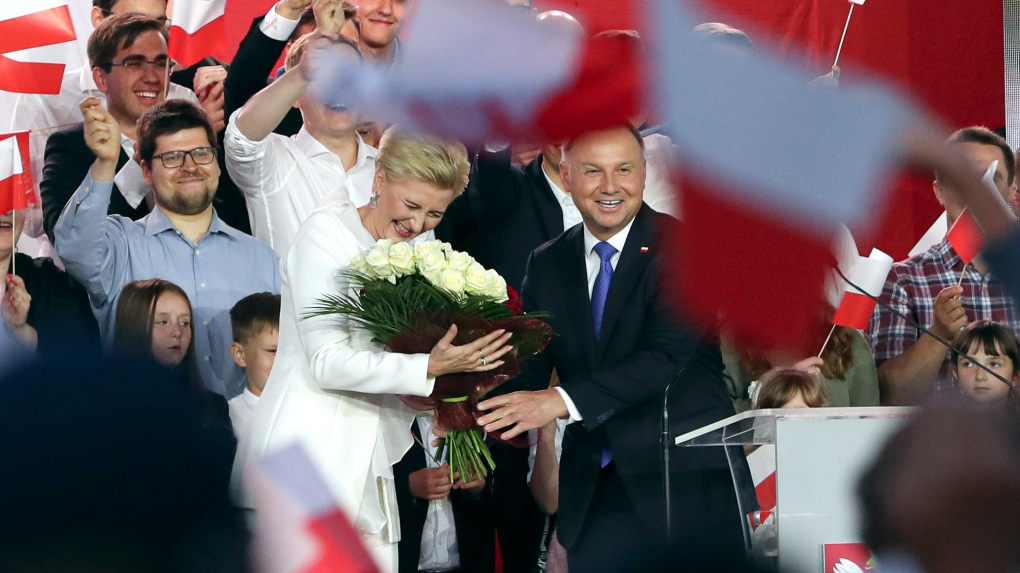 WARSAW, POLAND -- A late exit poll in Poland's presidential runoff Sunday showed the conservative, populist incumbent, Andrzej Duda, leading against the liberal, pro-Europe mayor of Warsaw, but with the race still too close to call.

It appeared to be the closest election in Poland's history, reflecting the deep divisions in this European Union nation. Although the country is struggling with the coronavirus pandemic and problems in its health and education systems, the campaign was dominated by issues of culture and saw strains of homophobia and anti-Semitism.

Official results are not expected until Monday or Tuesday.

The results would lead Poland down starkly different political paths, at least until 2023, when the next parliamentary election is scheduled.

Duda, who is backed by the ruling right-wing Law and Justice party and the government, campaigned on traditional values and social spending in this mostly Catholic nation as he sought a second 5-year term.

As the race became tighter in recent weeks, Duda turned further to the right in search of votes. He seized on gay rights as a key theme, denouncing the LGBT rights movement as an "ideology" worse than communism.

Duda's campaign also cast Trzaskowski as someone who would sell out Polish families to Jewish interests, tapping into old anti-Semitic tropes in a country that was home to Europe's largest Jewish community before being decimated by Germany in the Holocaust.

On Sunday night Duda said he didn't regret anything he said in the campaign because "I said what I believe."

Trzaskowski, a former European Parliament lawmaker, jumped into the race relatively late to oppose Duda's and Law and Justice's erosion of democratic rights under the ruling party. He represented the centrist opposition Civic Platform party, which was in power in from 2007 to 2015.

Duda expressed confidence that the results would confirm his victory, and he called the high turnout "a beautiful testimony of our democracy."

Duda said the turnout was around 70%, which would be a record high for a presidential election in the 30 years since Poland threw off communism, embraced democracy and later gained membership in NATO and the EU.

Long lines outside some polling stations Sunday night forced them to stay open past their official closing time of 9 p.m. for what many considered to be one of the most crucial elections in these three decades of democracy.

Those supporting Trzaskowski saw the election as possibly a last chance to halt an erosion of the rule of law and discriminatory rhetoric under Duda and the ruling party, both in power since 2015.

At an election night event, Trzaskowski said he still believed the numbers could turn in his favour. Exit polls do not reflect the votes cast from abroad, and a majority of them were expected to go to Trzaskowski.

He said he was still dreaming of a Poland "that knows how to rebuild a united society, that is proud of it's tradition, that is looking to the future, that is just, European, tolerant, where no one divides us."

If Duda is reelected, the populist Law and Justice party will keep a close ally in the president and maintain its hold on almost all key instruments of power in the nation of 38 million people. A win for Trzaskowski would give him the power to veto laws passed by the ruling conservatives and give Poland a less contentious relationship with European Union officials.

Duda had the full mobilization of the government, public media, and the help of President Donald Trump, who welcomed him at the White House last month and said he was doing a "terrific job."

The ballot was supposed to be held in May but after much political wrangling was delayed by health concerns amid the coronavirus pandemic. Some 30 million voters were eligible to cast ballots. In the first round with 11 candidates, Duda got 43.5% support and Trzaskowski 30.5%.

The ruling party and Duda have won popularity through a welfare program that improved the lives of many impoverished retirees and families with children, especially in rural areas and small towns, and also through their attachment to Poland's traditional Roman Catholic values.

But the ruling party has drawn criticism from EU leaders for taking steps to politically influence the justice system and the media in Poland. It has also deepened social rifts with verbal attacks on urban liberals, Jews and the LGBT community.

Due to the pandemic, the voting was held under strict sanitary regulations. Poland has registered over 37,000 infections and almost 1,600 virus-related deaths. Voters had to wear masks and gloves, maintain a safe distance and use hand sanitizer. They used their own pens to mark ballots.