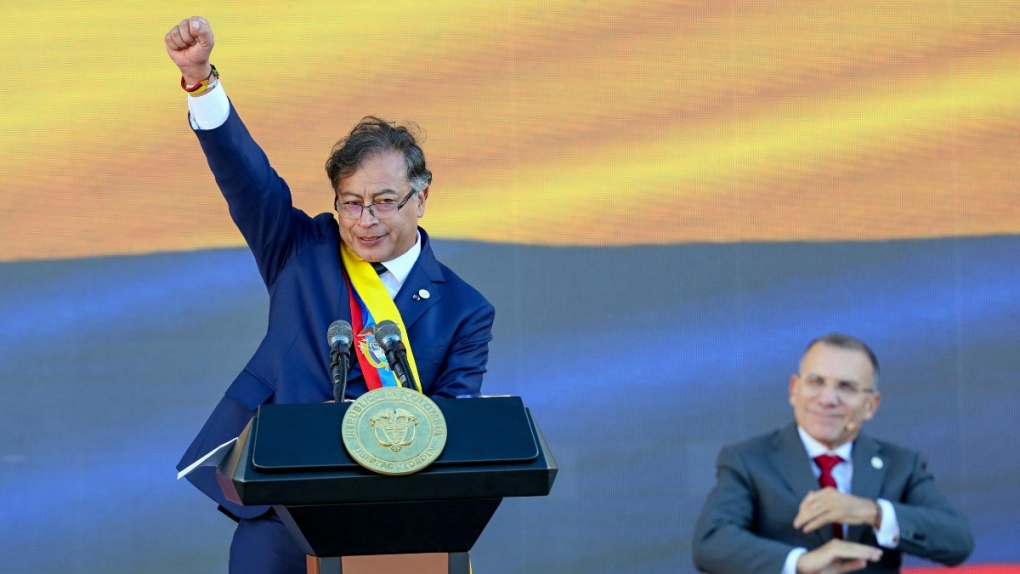 President Gustavo Petro raises his fist at the end of his inauguration speech in Bogota, Colombia, on Aug. 7, 2022. (Fernando Vergara / AP)
BOGOTA, Colombia -

Colombia's first leftist president was sworn into office Sunday, promising to fight inequality and bring peace to a country long haunted by bloody feuds between the government, drug traffickers and rebel groups.

Gustavo Petro, a former member of Colombia's M-19 guerrilla group, won the presidential election in June by beating conservative parties that offered moderate changes to the market-friendly economy, but failed to connect with voters frustrated by rising poverty and violence against human rights leaders and environmental groups in rural areas.

On Sunday, he said Colombia was getting a "second chance" to tackle violence and poverty and promised that his government would implement economic policies that seek to end longstanding inequalities and ensure "solidarity" with the nation's most vulnerable.

The incoming president said he was willing to start peace talks with armed groups across the country and also called on the United States and other developed nations to change drug policies that have focused on the prohibition of substances like cocaine, and fed violent conflicts across Colombia and other Latin American nations.

"It's time for a new international convention that accepts that the war on drugs has failed," he said. "Of course peace is possible. But it depends on current drug policies being substituted with strong measures that prevent consumption in developed societies."

Petro is part of a growing group of leftist politicians and political outsiders who have been winning elections in Latin America since the pandemic broke out and hurt incumbents who struggled with its economic aftershocks.

The ex-rebel's victory was also exceptional for Colombia, where voters had been historically reluctant to back leftist politicians who were often accused of being soft on crime or allied with guerrillas.

A 2016 peace deal between Colombia's government and the Revolutionary Armed Forces of Colombia turned the focus of voters away from the violent conflicts playing out in rural areas and gave prominence to problems like poverty and corruption, fueling the popularity of leftist parties in national elections. However, smaller rebel groups like the National Liberation Army and the Gulf Clan continue to fight over drug trafficking routes, illegal gold mines and other resources abandoned by the FARC.

Petro, 62, has described U.S.-led antinarcotics policies as a failure but has also said he would like to work with Washington "as equals," building schemes to combat climate change or bring infrastructure to rural areas where many farmers say coca leaves are the only viable crop.

Petro also formed alliances with environmentalists during his presidential campaign and has promised to turn Colombia into a "global powerhouse for life" by slowing deforestation and reducing the country's reliance on fossil fuels.

He has said Colombia will stop granting new licenses for oil exploration and will ban fracking projects, even though the oil industry makes up almost 50% of the nation's legal exports. He plans to finance social spending with a US$10 billion a year tax reform that would boost taxes on the rich and do away with corporate tax breaks.

"He's got a very ambitious agenda," said Yan Basset, a political scientist at Bogota's Rosario University. "But he will have to prioritize. The risk Petro faces is that he goes after too many reforms at once and gets nothing" through Colombia's congress.

Analysts expect Petro's foreign policy to be markedly different from that of his predecessor Ivan Duque, a conservative who backed Washington's drug policies and worked with the U.S. government to isolate the regime of Venezuelan President Nicolas Maduro in an attempt to force the authoritarian leader into holding free elections.

Petro has instead said he will recognize Maduro's government and try to work with the Venezuelan president on several issues, including fighting rebel groups along the porous border between the countries. Some border residents are hoping that improved relations will generate more commerce and job opportunities.

Hours before Petro took office, at the most important border crossing bridge with Venezuela, a group of people carried a Colombian flag as they walked toward Venezuela chanting "Viva Colombia, Viva Venezuela!" Supporters of Maduro held a concert on the Venezuelan side of the border.

In Cucuta, a city just a few miles from the Venezuelan border, trade school student Daniela Cardenas is hoping Petro will carry out an educational reform that includes free tuition for college students.

"He has promised so many things," Cardenas, 19, said after traveling 90 minutes from her rural community to the city. "We must work to be able to pay our student fees, which are quite expensive and, well, that makes many things difficult for us."

Eight heads of state attended Petro's inauguration, which was held at a large colonial-era square in front of Colombia's Congress. Stages with live music and big screens were also placed in parks across Bogota's city center so that tens of thousands of citizens without invitations to the main event could join the festivities. That marked a big change for Colombia where previous presidential inaugurations were more somber events limited to a few hundred VIP guests.

"It's the first time that people from the base can come here to be part of a presidential inauguration," said Luis Alberto Tombe, a member of the Guambiano tribe wearing a traditional blue poncho. "We feel honored to be here."

But not everyone is feeling so hopeful about Petro's victory. In Medellin Stefan Bravo, a conservative activist, organized an anti-Petro march on Saturday that was joined by around 500 people. He's worried Colombia's new president will erode the separation of powers in the South American country, and follow the policies of Venezuela's Hugo Chavez.

"Petro does not represent us," Bravo said. "This government will be a threat to family values, private property and foreign investment."

Petro won the election by just 2 percentage points, and is still a polarizing figure in Colombia, where many have been wary of having former guerrillas participate in politics.

His Cabinet appointments have also been highly scrutinized: The new president picked an internationally renown economics professor as his finance minister, while also choosing an academic who researches the negative impacts of extractive industries as his minister for mining, and giving the labor ministry to the head of Colombia's communist party.

"I think he's trying to forge a balance," said Sergio Guzman, a political risk analyst in Bogota. "He has included the activists who he promised to make an integral part of his government, the centrist technocrats who give the markets confidence, and the different political parties with whom he has to govern to pass anything in congress."

A $1 billion class action lawsuit has been filed in the Court of King’s Bench against the Government of Manitoba and the Attorney General of Canada related to the child welfare system in Manitoba.