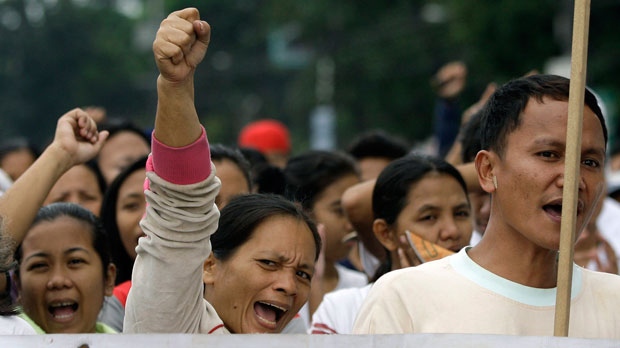 Supporters of former Philippine President Gloria Macapagal Arroyo shout slogans during a rally outside the Sandiganbayan anti-graft court in suburban Quezon City, north of Manila, Philippines on Thursday, Oct. 4, 2012. The Philippine anti-graft court has issued an order to arrest Arroyo on charges of plunder for allegedly misusing state lottery funds during her last years in office. (AP Photo/Aaron Favila)

MANILA, Philippines -- Police arrested former Philippine President Gloria Macapagal Arroyo on Thursday and temporarily detained her in a hospital on corruption charges, in her third indictment and second detention since stepping down two years ago.

The Philippine anti-graft court ordered her arrest for allegedly misusing $8.8 million in state lottery funds during her last years in office. The court earlier denied a motion by Arroyo's lawyer questioning the basis of the charges in a bid to block the arrest order.

Police served the arrest warrant on Arroyo, who is suffering from a neck ailment, at government-run Veterans Memorial Medical Center, where she was earlier admitted for dehydration, Senior Supt. Joel Coronel said.

He said Arroyo was co-operative with the arresting officers.

"When we arrived at the hospital she was lying on the bed with an IV attached to her," Coronel said.

He said Arroyo would remain in the hospital overnight and police will await a court order on whether she should remain detained at the hospital, in a regular jail or in another government facility.

The former president was detained for about eight months in the same hospital in a separate case involving alleged election rigging before she posted bail in July. She has also posted bail in another case related to a botched overpriced deal with a Chinese telecommunications company. Both cases are ongoing.

Arroyo has accused her successor, Benigno Aquino III, of pursuing a political vendetta against her. Aquino has accused Arroyo of graft during her nine years in office and promised to rid the Philippines of corruption. His ratings remain high, and the cases against Arroyo and her inner circle have served to highlight his administration's determination to restore public and investor confidence in government.

Officials have denied Arroyo's request to seek medical treatment abroad, saying she might not return.

The charges against Arroyo in the most recent case allege that money was diverted from the Philippine Charity Sweepstakes Office's intelligence fund for her personal gain from 2008 until Arroyo stepped down in 2010.

Nine others, mostly former senior officials of the lottery agency, have also been accused and are facing arrest. Several have informed police they will surrender, Coronel said. The charges against them and Arroyo are punishable by life imprisonment and no bail is allowed.

During oral arguments earlier Thursday, the court agreed to take a second look at a defence motion seeking a reconsideration of the charges against Arroyo. Hours later, it denied the motion, clearing the way for her arrest.

Arroyo, 65, now a member of Congress from her home province of Pampanga, is seeking re-election next year. Her eldest son, Juan Miguel Arroyo, filed candidancy papers on her behalf Wednesday.