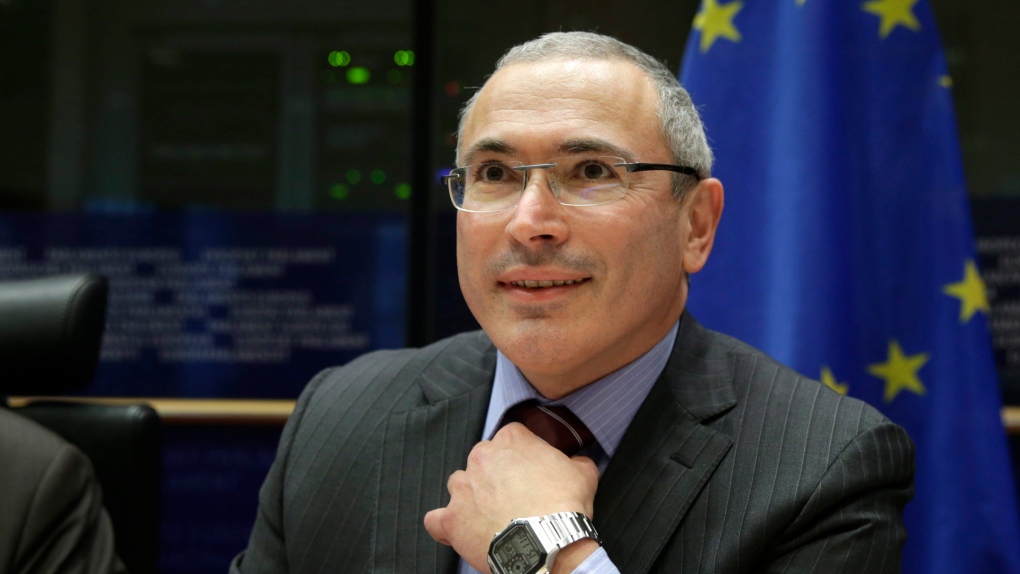 Russian businessman and Amnesty International prisoner of conscience Mikhail Khodorkovsky smiles as he attends the Foreign Affairs Committee for a debate on human rights situation in Russia at the European Parliament building, in Brussels on Tuesday, Dec. 2, 2014. (AP Photo/Yves Logghe)

MOSCOW -- Russian investigators announced Tuesday they are reopening the case of the 1998 killing of a Siberian mayor and consider former oil tycoon Mikhail Khodorkovsky a prime suspect.

At the time when Nefteyugansk Mayor Vladimir Petukhov was shot dead, he was involved in a conflict with Khodorkovsky's oil company, Yukos, over the payment of local taxes. Khodorkovsky and his associates have denied any involvement and no one has been convicted in the killing.

The announcement that investigators were considering whether to charge Khodorkovsky with ordering the killing came as he is becoming an increasingly strong voice in Russian opposition politics.

Khodorkovsky has lived in exile in Switzerland since his 2013 release from prison, where he spent 10 years on charges of tax evasion, embezzlement and money laundering that were seen as punishment for challenging President Vladimir Putin's power.

In addition to his own talks and writings on the political situation in Russia, Khodorkovsky funds a Russian civil society organization called Open Russia. The Kremlin is suspicious of non-governmental organizations, especially those funded from abroad, seeing them as aimed at undermining Putin's rule. Police wearing ski masks raided Open Russia's Moscow office in April.

The Russian government also is fighting a ruling made last year by an arbitration court in The Hague, Netherlands, that it must pay $50 billion to compensate the former shareholders of Yukos, which was bankrupted in the same legal onslaught that sent Khodorkovsky to prison. The Kremlin was livid when some Russian bank accounts in Belgium and France were frozen this month as part of efforts to enforce the judgment.

Vladimir Markin, spokesman for the federal Investigative Committee, said investigators have information implicating Khodorkovsky in the killing of the mayor and other crimes. They intended to question him, and "his absence from Russian territory would not be an insurmountable obstacle," Markin said in a statement.

Khodorkovsky posted a message on Twitter asking Markin to specify whether this was in reaction to the implementation of The Hague ruling or to a series of articles that he wrote on the future of Russia after Putin.

Markin responded quickly, tweeting: "The Investigative Committee is not interested in politics."