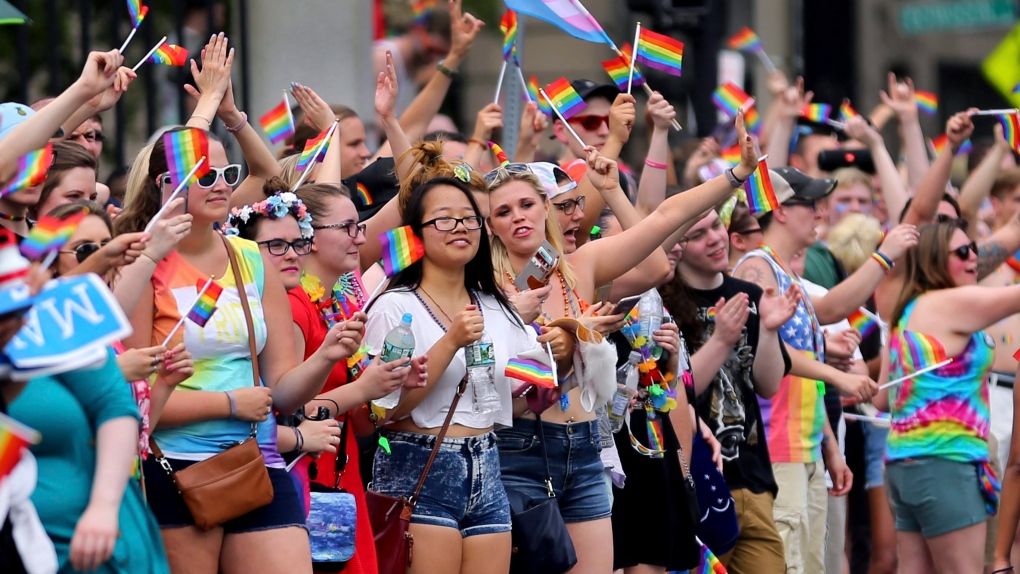 Spectators line the sidewalk on Beacon Street during the annual Pride Day Parade in front of the State House in Boston on Saturday, June 10, 2017. Calls for a so-called "straight pride" parade have created controversy ahead of the event. (John Tlumacki/The Boston Globe via AP)

As pride month gets underway, marking the triumphs and struggles of the LGBTQ community, calls for a “Straight Pride” parade in Boston have sparked outrage on social media.

Three men operating under the name “Super Happy Fun America” have presented the City of Boston with a list of demands to hold a parade celebrating “the diverse history, culture, and contributions of the straight community.”

Organizers say they have petitioned the city for a permit asking that they be granted the same parade route as the Boston Pride parade, including street closures and permits for vehicles and floats.

“Straight people are an oppressed majority,” reads a quote from the group’s president John Hugo.

“We will fight for the right of straights everywhere to express pride in themselves without fear of judgement and hate. The day will come when straights will finally be included as equals among all of the other orientations.”

“Why is there no straight pride? Because I’ve never had to do the following things to be straight: fight, march, face discrimination, be ridiculed,” read one tweet. “If you’re mad that people are marching, stop giving them a reason to march.”

Others mocked the idea by encouraging a straight pride parade.

“I’m all for straight pride. Let them have all the things queer people have—fear and anxiety when in public, an upbringing of shame and psychological abuse, uncertainty about whether the rights you've gained will be taken away at any given moment,” wrote another Twitter user.

‘Pride is a defiant statement against shame’

The so-called “heterosexual activists” are missing the point of the pride movement, according to Tom Hooper, a historian at Toronto’s York University.

“The question I am asking myself is ‘Why is [pride] offensive to the heterosexual community?’ Because it seems to me that is the conversation going on here,” Hooper told CTVNews.ca

“Pride has never been about whether somebody should be proud of themselves; pride is something that we celebrate in defiance of shame.”

Hooper notes that the catalyst for the pride movement began with the Stonewall riots, the uprising against police raids targeting the LGBTQ community. This year marks the 50th anniversary of the riots.

But the historian, whose research subjects include the Toronto bathhouse raids, says that’s not to suggest heterosexuals don’t belong at pride. In fact, he notes that some of the same laws that targeted gay bathhouses were used to target straight swingers clubs.

“[Pride] is not about including or excluding; it’s about the purpose that brings people out into the street,” he said. “We want to proclaim that we are not going to be ashamed because of our sexuality.”

But the argument for straight pride is not new—Hooper says the same calls were heard in the 1980’s, and have continued for years.

“It’s one of the ways in which we are still being attacked,” he explained.

“It’s meant to diminish the shame we experience in our day to day lives.”

CTV News contacted the organizers of Boston Straight Pride for comment on the controversy but did not receive a response.

According to the City of Boston, the group has been in contact regarding their proposal, but has not yet received the necessary permits to host a parade.

In a statement to CTVNews.ca, Boston Pride President Linda Demarco said that organizers will welcome everyone to the parade, taking place on June 8, including straight allies.

“We know that straight allies of the LGBTQ community are among the thousands of supporters who come out every year to march, observe and celebrate,” Demarco said in the statement.

“We are looking forward to seeing our straight friends, family, and neighbors at the Boston Pride parade and festival this Saturday along with members of the LGBTQ community.”