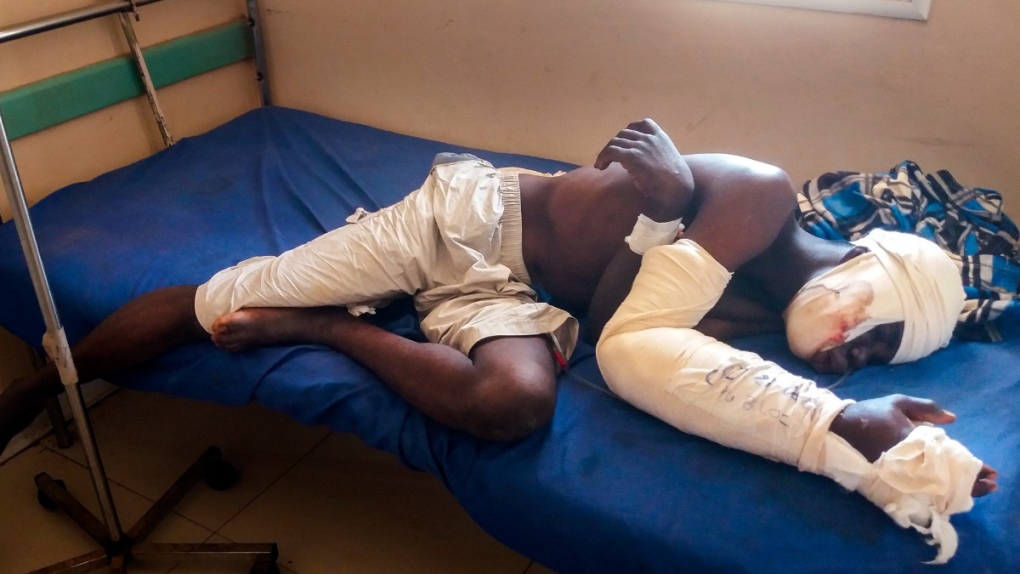 Saga Saganla, 30, from Diawely, lies on his bed at Somine Dolo hospital in Mopti, Mali, June 24, 2022. Saganla survived an attack by nearly 100 jihadis on motorbikes who had gathered in his village in central Mali, June 19. At least 132 people were killed in several villages in the Bankass area of central Mali during the attack, according to the government which blames the Group to Support Islam and Muslims jihadi rebels linked to al-Qaida.(AP Photo/ Hamidou Saye)
PARIS -

The French military, which spearheaded the Takuba task force, announced Friday that it officially ended its work Thursday. The move was tied to France's decision earlier this year to withdraw troops from Mali after nine years helping Malian forces fight violent extremists who had threatened to seize power.

The European departure comes after at least 132 people were killed in several villages in central Mali in recent weeks in attacks blamed on jihadi rebels linked to al-Qaida, and after a contractor for the UN peacekeeping force in Mali was killed Thursday.

It also comes as Mali's junta has grown closer to Russia, as Moscow has looked to build alliances and gain sway in Africa.

Despite the withdrawal, the French military called the force a "strategic and tactical success" and an example of "what Europeans are able to achieve together in complex security environments," saying that lessons learned from Takuba could be used in future joint operations.

Insurgents remain active in Mali, and extremist groups affiliated with al-Qaida and the Islamic State group have moved from the arid north to more populated central Mali, stoking animosity and violence between ethnic groups in the region.

The recent attacks on villages in central Mali were the deadliest since mutinous soldiers toppled the president in 2020.

Then on Thursday, a Malian contractor for the UN peacekeeping mission in Mali was killed by armed militants on a motorcycle in the city of Menaka. The UN force MINUSMA said he was in route to see his hospitalized wife when he was killed, denouncing the killing as a "cowardly and barbaric act."

The UN Security Council voted Wednesday to maintain the UN peacekeeping mission in Mali, while condemning its military rulers for using mercenaries who are accused of committing human rights and humanitarian violations.

The junta has hired mercenaries from Russia's Wagner Group, which has been accused by the European Union and human rights groups of violating human rights and international humanitarian law. While the Kremlin denies links to the company, western analysts call it a tool of Russian President Vladimir Putin.

Russia and China abstained from the French-drafted UN resolution, which extends the mandate of the mission until June 30, 2023, with its current ceiling of 13,289 military personnel and 1,920 international police.

Officials say more than 270 peacekeepers have died in Mali, making it the UN's deadliest peacekeeping mission.

Prime Minister Justin Trudeau nominated Ontario judge Michelle O’Bonsawin to the Supreme Court of Canada on Friday. She is the first Indigenous person to be tapped to sit on Canada's top court and the appointment is being celebrated as filling an important role at the highest level of the country's justice system.

Transport Minister Omar Alghabra is testifying before the House of Commons transport committee this afternoon about ongoing airport delays and flight cancellations.