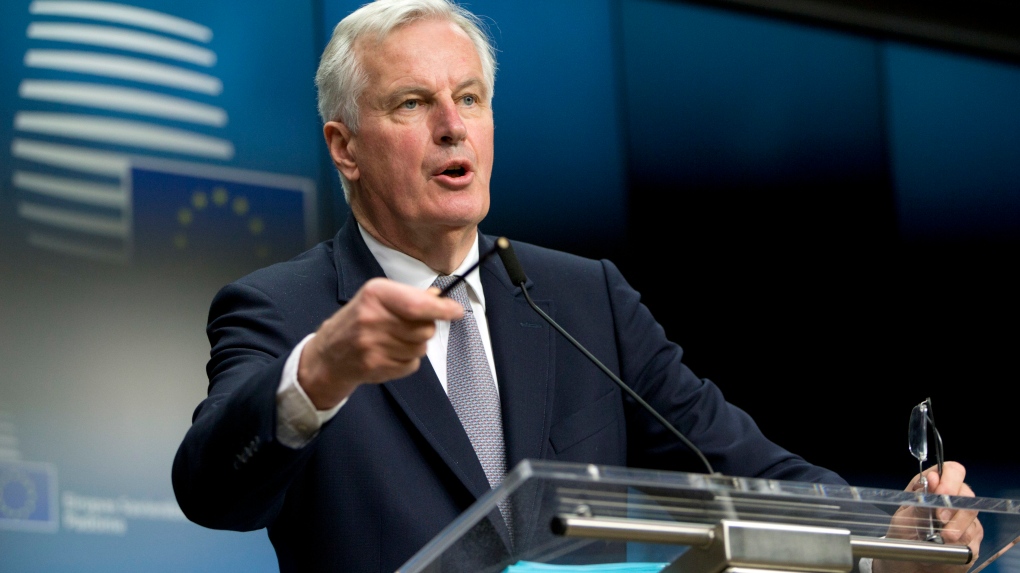 FILE - This is a Monday, May 22, 2017 file photo of EU chief Brexit negotiator Michel Barnier speaks during a media conference after a meeting of EU general affairs ministers in Brussels. (AP Photo/Virginia Mayo/File)

BRUSSELS -- The European Union on Tuesday gave its chief negotiator a robust mandate for free trade talks with ex-member Britain, setting up a likely clash over the U.K.'s demand to export to the continent on its own terms without the need to necessarily respect the bloc's rules and regulations.

The 27 remaining E.U. nations are insisting that if Britain wants the best possible trade deal, it will have to adhere to many of its rules from state aid to environmental standards and to keep its waters open to EU fishing boats.

The contrasting starting positions suggest the talks over the future trading relationship could be as frayed as the three-year negotiations related to issues around Britain's actual departure from the bloc. After insults and backbiting, the discussions eventually yielded an agreement on the divorce terms.

"It will be very tough. But it has been very tough for the past three years," said the EU's negotiator Michel Barnier.

Britain immediately accused the E.U. of backing away from its previous commitment to striking a free trade agreement. Prime Minister Boris Johnson's spokesman, James Slack, said the bloc was demanding "onerous commitments" from the U.K.

"We will not accept any demands for the U.K. to follow E.U. rules, just as we would not expect the EU to accept U.K. laws," he said.

In London, the U.K. government announced that the trade deal negotiations will begin in Brussels next Monday, a month after Britain's official departure from the bloc.

The post-Brexit trade talks always carried the palpable threat of a chaotic split without any agreement which would make trade costly and unpredictable overnight. Under an agreed transition period, Britain has to abide by E.U. rules until Dec. 31. But without a trade deal, the threat of more chaos looms at the end of the year.

"It will be an enormous task. I am afraid we will not only be negotiating, but also preparing ourselves for the chance of a no-deal Brexit," Dutch Foreign Minister Stef Blok warned.

Britain has already rejected abiding by E.U. rules, arguing that the ability to diverge from E.U. rules is a key component of Brexit. Supporters of Britain's departure from the bloc say the great dividend will lie in the repatriation of powers to London from Brussels for the benefit of the British economy.

Another stumbling block is the timetable. British Prime Minister Boris Johnson insists that a deal needs to be done by the end of the year so Britain can leave the E.U.'s frictionless single market and customs union. Britain remains within the E.U.'s economic orbit until the end of 2020 to smooth its departure from the bloc. That transition period can be extended once for up to two years but Johnson has said he won't be doing so.

That means the timetable to negotiate everything from fishing rights to access to EU markets is tight, as most trade deals take years to conclude.

"We need a good agreement rather than succumb to calendar pressure," said France's Europe Minister Amelie de Montchalin, who insists the U.K. must align itself with E.U. rules even as they evolve in the future.

The E.U. is fearful the U.K. could undercut E.U. firms if it is allowed to diverge too much from social, industrial and environmental standards that took years to build together. Given that Britain is an intrinsic part of the European economy following its 47 years of membership of the E.U., that's a particular concern across E.U. capitals.

The U.K.'s negotiating mandate is due to be published on Thursday. Britain has said it would be seeking a deal similar to the E.U.'s free trade agreement with Canada with no quotas or tariffs on goods. Britain has also promised it won't undercut the E.U. by lowering standards on environmental protection, food hygiene or workers' rights. Johnson said earlier this month that "we are not leaving the E.U. to undermine European standards."

The challenge for negotiators will be to find a way to make that commitment binding that both sides can agree on.

The first challenge will be fisheries, where the U.K. is set to clash with France. Johnson has insisted that reclaiming waters where local fisherman had to share catches with E.U. boats was an absolute priority.

De Montchalin was just as insistent that those waters need to remain open to E.U. boats. Johnson's government strongly disagrees and says that when the transition period ends, Britain will have control of its waters just like other coastal states.

"It doesn't matter what the E.U. puts in its mandate as we become an independent coastal state on December 31, 2020," Slack said. "Any access by non-U.K. vessels to fish in U.K. waters will be for us to determine."

E.U. ministers have also warned that Britain must fully respect the commitment it made in the Withdrawal Agreement to keep the border between the U.K.'s Northern Ireland and E.U. member Ireland free of customs posts and other obstacles.

That will be done by keeping Northern Ireland aligned to E.U. rules even if the rest of the U.K. diverges. Comments by Johnson's government seeming to downplay the significance of that agreement have set off alarm bells among E.U. leaders.

Barnier said it was "surprising" to hear what was being said by some in Johnson's entourage.

Irish Foreign Minister Simon Coveney said that if Britain did not fully implement its border commitment, "it will damage significantly the prospects of being able to get even a bare-bones trade agreement."