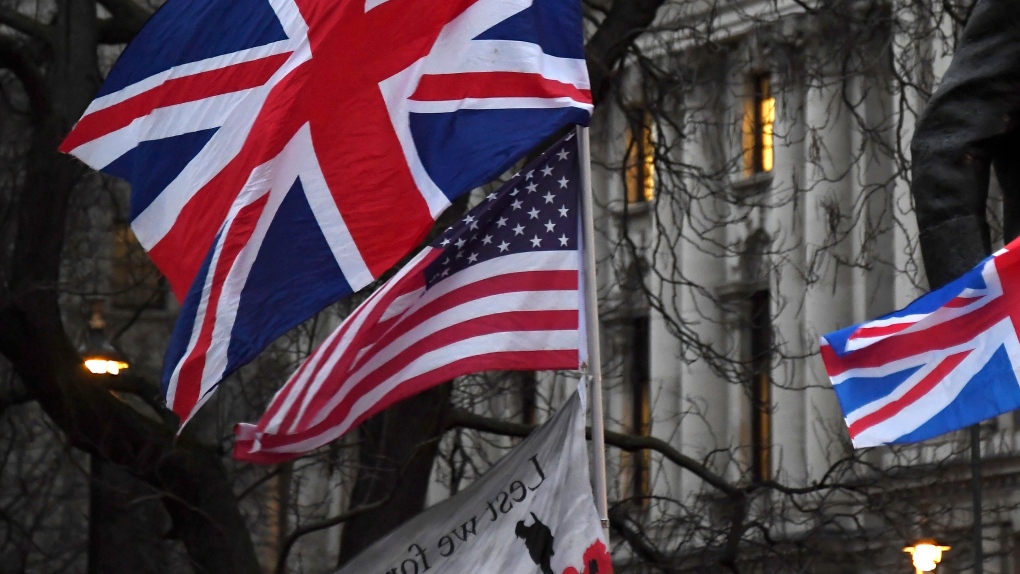 In this file photo dated Friday, Jan. 31, 2020, Brexit supporters hold British and US flags during a rally in London. (AP Photo/Alberto Pezzali, FILE)

BRUSSELS -- The president of the European Union's executive arm said Wednesday that the United Kingdom cannot unilaterally change the bilateral Brexit agreement without destroying global trust in the country.

Insisting that chances for a future trade deal were slipping away by the day, European Commission President Ursula von der Leyen told EU lawmakers that plans by British Prime Minister Boris Johnson to renege on parts of the U.K.-EU withdrawal agreement dimmed those hopes even further.

What's more, von der Leyen asserted, Britain is throwing its good name to the wind by not respecting a deal it signed in December.

"It cannot be unilaterally changed, disregarded,"" she said in her State of the Union address. "This is a matter of law and trust and good faith."

"Britain does not break treaties. It would be bad for Britain, bad for our relations with the rest of the world and bad for any future treaty on trade," von der Leyen quoted Thatcher's speech as saying.

Johnson has called his plan to unilaterally rewrite Britain's divorce deal with the EU an insurance policy against any unreasonable behaviour by the bloc.

The prime minister said his proposed law gives the U.K. government the power to override portions of the withdrawal agreement because the EU might "go to extreme and unreasonable lengths" in its treatment of former member Britain.

Under persistent questioning by Labour lawmaker Hilary Benn during a parliamentary committee hearing Wednesday, Johnson was asked whether the EU was "negotiating in good faith."

"I don't believe they are,? he said. Johnson added later in the hearing: "It is always possible that I am mistaken, and perhaps they will prove my suspicions wrong.?

Johnson later secured support for an amendment meant to assuage the discomfort among members of his Conservative Party. The compromise would allow lawmakers to vote before the government took any actions that broke international law.

Von der Leyen said the EU would always respect the agreements that get its signature and "we will never backtrack on that."

The U.K. withdrew from the EU's political institutions on Jan. 31 but remains in a tariff-free transition period until the end of the year while negotiators work out the terms of a future trade relationship.

The European Parliament would need to approve any trade deal, and the leader of the biggest group of the legislature, said that any deal would stand no chance with EU lawmakers if the U.K. disrespected even the slightest paragraph of the Brexit agreement.

"It makes no sense to negotiate a future agreement (with) a British prime minister who is throwing out of the window the agreement that he signed himself," Manfred Weber of the centre-right European People's Party said.

Weber warned: "Great Britain, you are losing your credibility at the global level."