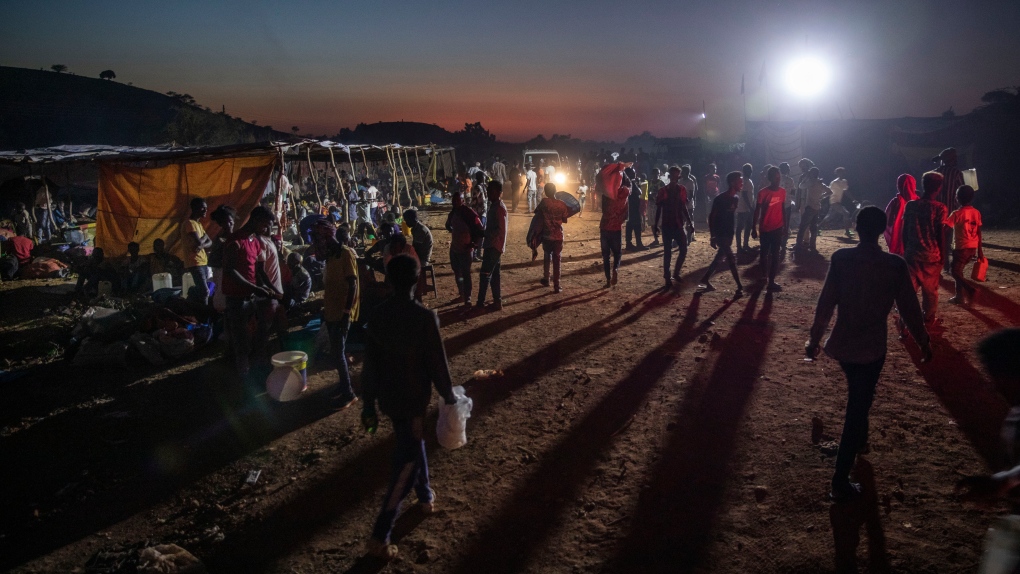 NAIROBI, KENYA -- Ethiopia's prime minister said Thursday the army has been ordered to move on the embattled Tigray regional capital after his 72-hour ultimatum ended for Tigray leaders to surrender, and he warned the city's half-million residents to stay indoors and disarm.

Instead, "an increasing number of people continues to leave Mekele" even after the deadline expired, UN humanitarian spokesman Saviano Abreu said. They join tens of thousands of newly displaced people throughout the region that remains almost completely sealed off from the world, beyond the reach of desperately needed food and other aid.

The military offensive "has reached its final stage" after three weeks of fighting, Prime Minister Abiy Ahmed's office said. That means tanks and other weaponry can close in on Mekele, whose residents were warned of "no mercy" if they didn't move away from the defiant Tigray leaders in time.

That caused international alarm as rights groups said such wording could violate international law and put civilians in further danger. "We will take utmost care to protect civilians," Abiy's statement said. It also asserted that thousands of Tigray militia and special forces surrendered during the 72-hour period.

Tigray regional leaders couldn't immediately be reached. With communications and transport links severed, it remains difficult to verify claims in the fighting that erupted Nov. 4 between Ethiopian forces and the heavily armed forces of the Tigray People's Liberation Front, which once dominated Ethiopia's government but has been sidelined under Abiy's rule. The two governments now regard each other as illegal.

The fighting threatens to destabilize Ethiopia, which has been described as the linchpin of the strategic Horn of Africa, and even its neighbours.

"What is happening is beyond words, and it is heartbreaking to see a great country is collapsing," said a message sent from a Mekele resident on Wednesday and seen by The Associated Press. The message expressed hopelessness at not being able to reach loved ones elsewhere in the region, adding, "Ohhhhhhhh GOD!"

But the situation in Mekele remained quiet, said spokeswoman Crystal Wells with the International Committee of the Red Cross. "We were still able to go about our work gathering messages from people in Mekele who are looking to contact their families outside" Tigray.

The international community is pleading for immediate de-escalation, dialogue and humanitarian access as Ethiopian forces have fought their way through Tigray to Mekele. Hundreds, perhaps thousands, have been killed. "Next to the casualties, the danger of a major humanitarian crisis is imminent," European Union commissioner for crisis management Janez Lenarcic tweeted.

Abiy, last year's Nobel Peace Prize winner, has rejected international "interference." His government has said three high-level African Union envoys for the conflict can meet with him, but not with the Tigray leaders.

Abiy's office for the first time did say a "humanitarian access route" would open under the management of the country's Ministry of Peace, with no details. It also said distribution of supplies has begun in areas of Tigray now under government control.

That came hours after the UN said shortages have become "very critical" in the Tigray region of 6 million people.

The UN appreciates the Ethiopian government's acknowledgement of the need for urgent humanitarian assistance, Abreu said. "We look forward to working with all parties to the conflict to ensure that humanitarians have unconditional, safe and immediate access to, and within, Tigray. ... We want to do so in accordance with the globally agreed-upon principles of humanity, neutrality, impartiality and operational independence."

Fuel and cash are running out in Tigray, and food for nearly 100,000 refugees from Eritrea will be gone in a week, according to the UN update released overnight. And more than 600,000 people who rely on monthly food rations haven't received them this month.

Travel blockages are so dire that even within Mekele the UN World Food Program cannot obtain access to transport food from its warehouses there.

Human Rights Watch is warning that "actions that deliberately impede relief supplies" violate international humanitarian law, and that the complete shutdown of communications "could amount to a form of collective punishment by imposing penalties on people without a clear lawful basis."

A statement this week from a civil society representative in the region, seen by the AP, described heavy bombardment of communities elsewhere that has kept many residents from fleeing.

Other people are frantically moving within the Tigray region from one district to another and "living within church compounds, streets, schools, health centres," the statement warned, and it pleaded for a safe corridor to ship in aid as food runs out.

Fighting has come dangerously close to the camps housing Eritrean refugees in the area of Shire. "We are extremely concerned," Abreu with the UN said.

Another crisis is unfolding as more than 40,000 Ethiopian refugees have fled into a remote area of Sudan, where humanitarian groups and local communities struggle to feed, treat and shelter them. Nearly half the refugees are children under 18. Many fled with nothing.

"When it is cold, it hurts so much," said one wounded refugee, Alam Kafa. "At night, I have to wrap tightly with a blanket so I can sleep. But I don't sleep at night."

"Just to imagine for everything, literally for everything, starting from your food, ending with your water drinking, ending just to go for the toilet facilities and washing your hands, for everything you depend on somebody else," said Javanshir Hajiyev with aid group Mercy Corps. This is really a very dire situation. I can't stress how difficult it is."