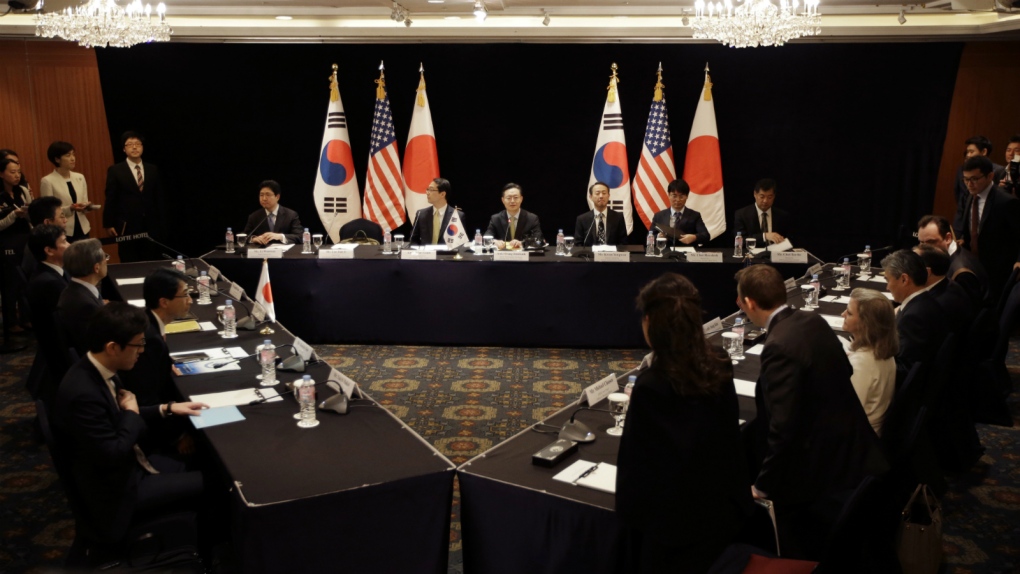 SEOUL, Korea, Republic Of - The top nuclear envoys from South Korea, the United States and Japan agreed Wednesday on the need to increase pressure on North Korea and urged the country to engage in serious negotiations on its expanding nuclear weapons program.

The one-day meeting in Seoul follows a recent North Korea claim that it had tested a new type of missile from a submarine and a reiteration that it had built a nuclear warhead small enough to be mounted on a long-range missile. Outside analysts are skeptical about both claims, but they believe the North has built a small but growing nuclear bomb arsenal and advanced its missile program since international nuclear disarmament talks stalled in early 2009.

Seoul, Washington and Tokyo are members of now-dormant six-nation negotiations aimed at ending North Korea's nuclear weapons program in return for aid and political concessions. The other members are Pyongyang, Beijing and Moscow.

Wednesday's meetings are part of a series of such talks meant to co-ordinate a unified stance on North Korea's growing arsenal. Prospects are slim that larger disarmament talks with Pyongyang will happen soon. Washington and its allies want North Korea to demonstrate its sincerity by following through with past nuclear pledges. North Korea, however, has consistently demanded that Washington and its allies recognize it as a nuclear weapons power.

“We reaffirmed our commitment to continuing the closest possible trilateral co-ordination and consultation,” U.S. envoy Sung Kim told reporters after the meeting. “We agreed on the importance of enhancing pressure and sanctions on North Korea even as we keep all diplomatic options on the table and open.”

South Korean envoy Hwang Joonkook urged the North to engage in discussions in a sincere manner, warning its diplomatic and international isolation would deepen if it defiantly pushes to develop more weapons.

Hwang described Wednesday's meeting as “particularly timely” because of uncertainty in North Korea.

South Korean and U.S. envoys are to fly to Beijing later this week to hold individual talks with their Chinese counterpart, according to Seoul's Foreign Ministry. China is the North's only major ally and main aid benefactor, and is often mentioned as the key to pushing the North to give up its nuclear ambitions.

U.S. officials quietly proposed a meeting with North Korea this January, before the U.S. and South Korea began annual military exercises that North Korea regards as a provocation. The two sides, however, failed to agree on who would attend and where they would meet.