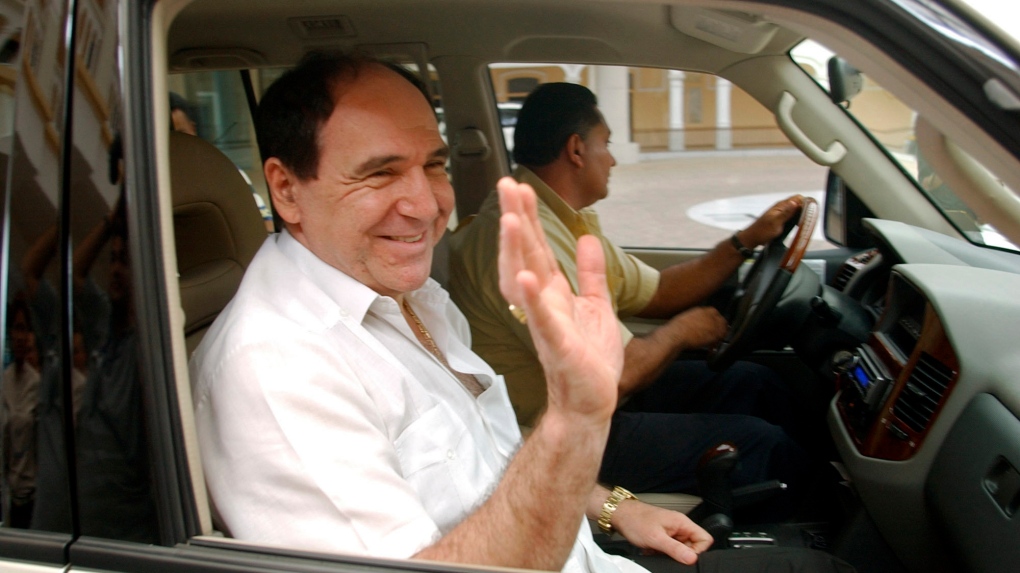 QUITO, ECUADOR -- A former Ecuadorian president known for his wild antics has been detained in an organized crime probe as authorities investigate the murder of an Israeli man jailed in a possible COVID-19 medical supplies scandal, the nation's interior minister said Wednesday.

Heavily armed police burst into Abdala Bucaram's home, waking up the 68-year-old in his bed and detaining him under a judge's order in the port city of Guayaquil, Interior Minister Maria Paula Romo told an Ecuadorian radio station.

Bucaram has not been charged, but Romo said a judge ordered his detention while investigators examine "the degree of participation -- if there was or not" in crimes related to an inmate's death Saturday at the Litoral Penitentiary in Guayaquil.

The chief prosecutor's office confirmed Bucaram had been detained, but revealed little about the investigation, other than to say it is part of an organized crime probe that also involves one of the ex-president's sons and three transit employees.

Bucaram -- who was kicked out of office by Congress six months after his 1996 election -- has been caught up in a COVID-19 crime probe since June, when authorities raided his home and found an unlicensed gun, several pre-Columbian art sculptures, as well as 5,000 face masks and 2,000 coronavirus antibody rapid test kits.

Investigators said at the time that the raid was part of an ongoing probe into suspected embezzlement at a large public hospital.

In late July, his three adult sons were ordered detained as a preliminary measure as the investigation advances, though they have not been located. Bucaram, meanwhile, has been charged with illegal possession of a firearm and for harbouring the antiquities, which are considered state-owned cultural patrimony.

Bucaram rose to power with the votes of Ecuador's poor and indigenous groups and became known as "El Loco Que Ama" or "The Crazy Man Who Loves" for his many bizarre acts. He once shaved his Charlie Chaplin-like moustache on a telethon to earn money for poor children and liked to compare himself to great world leaders who had been assassinated.

He was ousted by Congress shortly into his presidency for "mental incapacity" and accused of corruption and nepotism.

The bizarre recent events took a dark turn over the last week, when a digital news outlet published audio of a reported conversation between Bucaram and Shy Dahan, one of two Israeli men detained after being found with $100,000 cash and fake documents trying to pass themselves off as U.S. Drug Enforcement Administration agents.

In the audio, a man identified as Dahan asks by phone, "I have your word that no one is going to try and kill me, none of that?"

The response, purportedly from Bucaram: "We've talked about one's word. I maintain my word that in court, I'll get you out."

Hector Gabriel Vanegas, a lawyer for Sheinman, said his client has information about organized crime networks in Ecuador and has been subject to "constant threats" since his detention. The Israelis are believed to have sold medical supplies to Jacobo Bucaram, one of the ex-president's sons, allegedly with the aim of selling them at exorbitantly high prices to hospitals in Guayaquil.

"The Bucaram family hasn't been responsible for a single death in this country," he said.