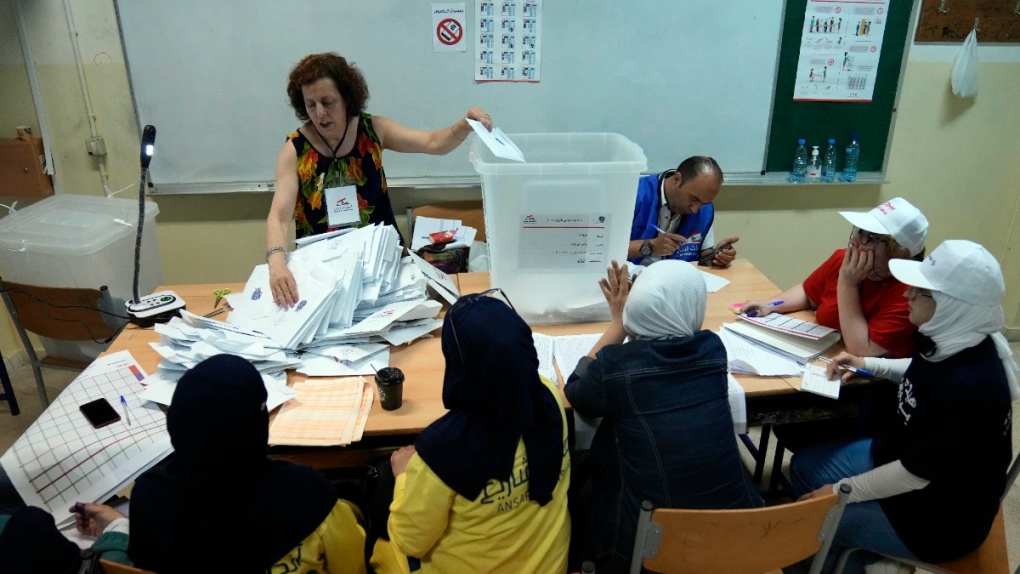 Lebanon's militant Hezbollah group and its allies suffered losses in this weekend's parliamentary elections, with preliminary results Monday showing some vocal opponents picking up more seats and several traditional partners routed out of the legislature.

The biggest winner appeared to be the nationalist Christian Lebanese Forces party led by Samir Geagea, overtaking the Free Patriotic Movement founded by President Michel Aoun as the largest Christian bloc in Parliament. The Lebanese Forces is a strong critic of Iran-backed Hezbollah and has received funding from Saudi Arabia, Iran's regional foe.

Meanwhile, independents and newcomers, including those from the 2019 protest movement, scooped up at least 10 seats. That was a major achievement considering they went into the vote fragmented and facing intimidation and threats by entrenched mainstream parties. Their showing sends a strong message to ruling class politicians who have held on to their seats despite an economic meltdown that has impoverished the country and triggered the biggest wave of emigration since the 1975-90 civil war.

Despite the apparent setback, Hezbollah and its main Shiite ally, the Amal group of Parliament Speaker Nabih Berri, are likely to retain the 27 seats allocated to the sect. It was not clear, however, whether the Iran-backed group and its allies would hang on to the majority they have held since 2018, when they grabbed 71 of the 128 seats in parliament.

The preliminary results point to a shift, but more turmoil lies ahead. They portend a sharply polarized parliament divided between pro and anti-Hezbollah lawmakers who will find it difficult to work together to form a new government and pass the laws needed to to enact reforms and begin the country's financial recovery.

With two main blocs - Hezbollah and the Lebanese Forces - opposed to each other, analysts said the results could be more paralysis.

“Going forward, unless these two groups can reach a modus vivendi on governance, Lebanon will be stuck in a political deadlock with long-term disastrous economic consequences,” said Randa Slim, senior fellow with the Washington-based Middle East Institute.

Prime Minister Najib Mikati, who is hoping to return as head of a post-election government, urged groups and independents who will be represented in the new parliament to move quickly “because what we are passing through cannot withstand (political) bickering at the expense of priorities.”

Mikati was apparently referring to consultations that are expected to begin soon to name a new prime minister whose government's main mission will be to negotiate with the International Monetary Fund to work on getting Lebanon out of its paralyzing economic crisis. The legislature will have to draft new laws related to the economic crisis, such as a capital controls law.

The new parliament will also elect a new president later this year, after Aoun's term ends in October.

Sunday's elections for parliament are the first since Lebanon's economic meltdown began in late 2019. The government's factions have done virtually nothing to address the collapse, leaving Lebanese to fend for themselves as they plunge into poverty, without electricity, medicine, garbage collection or any other semblance of normal life.

A new crop of candidates from the protest movement won at least 10 seats, a significant win that they celebrated Monday. But they are fragmented and it is unclear whether they can work together as a unified bloc in parliament.

“Personally, I am not optimistic about these elections, and I do not think that the U.S. administration should bet on these elections,” said former U.S. Assistant Secretary of State for Near Eastern Affairs David Schenker last week.

“There is a broken system in Lebanon, and elections with such electoral laws will clearly not fix it,” he said in a webinar for the Washington Institute.

In comments that reverberated in Lebanon, he described candidates running against Hezbollah and its allies as “incredibly divided, brimming with narcissistic and individualistic leaders” more interested in personal gain than getting together and overthrowing a corrupt elite.”

In a sign of the enormous difficulties lying ahead, the value of the Lebanese pound dropped by 3% on Monday, reaching 28,300 to the U.S. dollar. The Lebanese currency was pegged at 1,500 pounds to the dollar for 22 years until decades of corruption and mismanagement led to the country's worst economic crisis in its modern history starting in October 2019.

The Interior Minister was announcing results successively as they came in Monday. With votes still being counted, preliminary results showed independents were able to unseat several longtime politicians from parliament, including Hezbollah-allied Druze politician Talal Arslan for the first time in 30 years.

Prime Minister Justin Trudeau is headed to the G7 in Germany Saturday without a consensus from the Commonwealth to condemn the Russian invasion of Ukraine, but with a chorus of countries calling for help to overcome the fallout of the war.

Many Canadians still remain unaware of the involvement of forced child labour in the products they buy, according to non-profit agency World Vision Canada.

The family of Chelsea Cardno says the body found on flooded farmland adjacent to Mission Creek Friday night has been identified as the missing Kelowna woman.