Doomsday Clock is now seconds, not minutes, from midnight 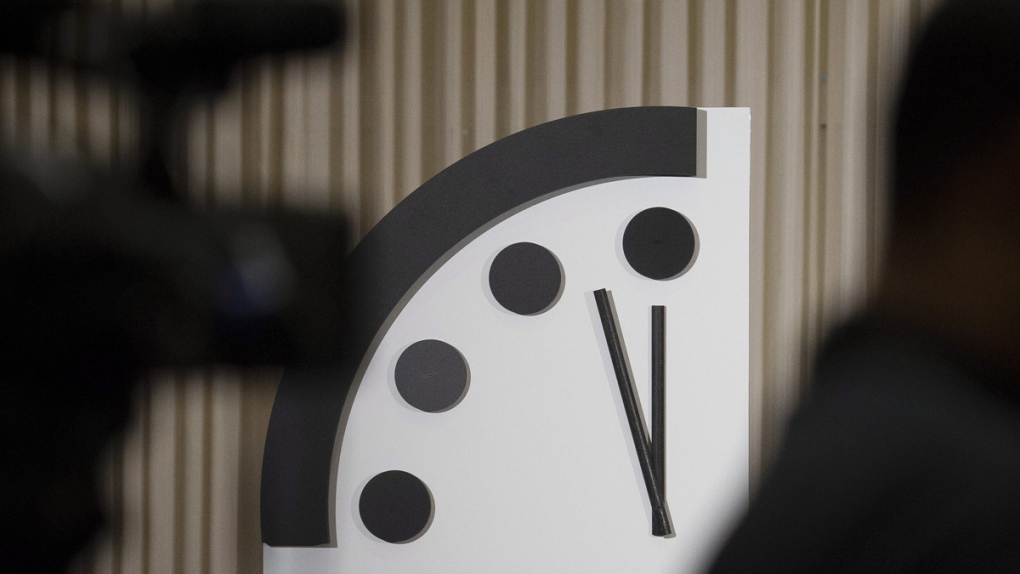 The Doomsday Clock at The Bulletin of the Atomic Scientists news conference in Washington, on Jan. 24, 2019. (Cliff Owen / AP)

The Doomsday Clock was reset Thursday to just 100 seconds before midnight -- the closest we have ever been to the complete and total annihilation of the earth (well, at least metaphorically).

Midnight on the Clock symbolizes the end of the world, and each year, the Bulletin of the Atomic Scientists decides what time it is.

"It is 100 seconds to midnight. We are now expressing how close the world is to catastrophe in seconds -- not hours, or even minutes," the Bulletin's President Rachel Bronson said in a statement. "We now face a true emergency -- an absolutely unacceptable state of world affairs that has eliminated any margin for error or further delay."

So what factors determine how close we are to midnight? Mainly, the threat of nuclear weapons and climate change, Bronson said.

When the Clock was created in 1947, the greatest threat to humanity was nuclear war as the U.S. and Soviet Union were headed into a nuclear arms race.

"But in 2007, we felt we couldn't answer those questions without including climate change," Bronson told CNN.

In recent years, the Bulletin's panel of scientists and other experts has started to look at other "disruptive technologies," including artificial intelligence, gene editing, and cyber threats, Bronson said.

While climate change and the nuclear threat remain the main factors, the Bulletin has identified "cyber intrusions and fake news as a threat enabler," Bronson said. "The information environment has become complicated and increasingly difficult to separate out facts from fiction, and that has made all the other threats more significant."

In 2018, the clock was set to 11:58 p.m. and it remained that way for 2019 as the threat of North Korea's nuclear weapons and climate change had the world on its toes.

This past year, those same threats were just amplified, moving the Clock ever closer to midnight.

In 2019, the nuclear threat rose with both North Korea and Iran.

The historic meetings with North Korean leader Kim Jong Un by U.S. President Donald Trump and South Korea's Moon Jae-in initially raised hopes of a possible deal on denuclearization, but there has been no significant progress made. North Korea has threatened to abandon negotiations with the US altogether, saying the last year and a half of talks was "lost time."

Recently, the Pentagon's No. 2 general said North Korea is "building new missiles ... new weapons as fast as anybody on the planet." Earlier this month, state news agency KCNA reported that Kim told his government officials that North Korea should no longer feel bound by its self-imposed halt on nuclear weapons and long-range missile testing.

And with Iran, the hashtag #WWIII started trending on Twitter after top Iranian military commander Qasem Soleimani was killed in a U.S. strike. Iran retaliated with a strike of its own, firing more than a dozen ballistic missiles at Iraqi military bases housing US troops.

Iran President Hassan Rouhani said his country is working on developing new, advanced uranium enrichment centrifuges, according to Iranian state news agency IRNA. It's a move that violates the nuclear agreement Tehran signed with other world powers in 2015.

On climate change, 2019 was the second-hottest year on record, capping off a decade that was warmest in recorded history, according to NASA & NOAA.

"This shows that what's happening is persistent, not a fluke due to some weather phenomenon: We know that the long-term trends are being driven by the increasing levels of greenhouse gases in the atmosphere," a NASA official said of the findings.

Experts say climate change has worsened the scope and impact of natural disasters like fires and floods. Australia has seen that impact firsthand, with wildfires ravaging the country for months.

So what can we do to set the Clock back?

The threats of nuclear destruction and global warming might seem too big for us to handle, but the Bulletin's goal is not to use the Clock as a scare tactic, but to get people talking.

"What we try to do is give the public the ability to talk about the state of nuclear security and to really pressure their leaders to pay attention to that and climate change and show that they're concerned about it," Bronson said.

"In democracies, we try to encourage people to talk to their political representatives that these huge investments that are going into nuclear arsenals might be directed elsewhere. That arms control agreements should be signed to reduce the threats."

In fact, the Clock hand has been moved away from midnight almost as often as it was moved closer, the Bulletin said.

It moved the hand farthest away -- a whopping 17 minutes before midnight -- in 1991, when President George H.W. Bush's administration signed the Strategic Arms Reduction Treaty with the Soviet Union.