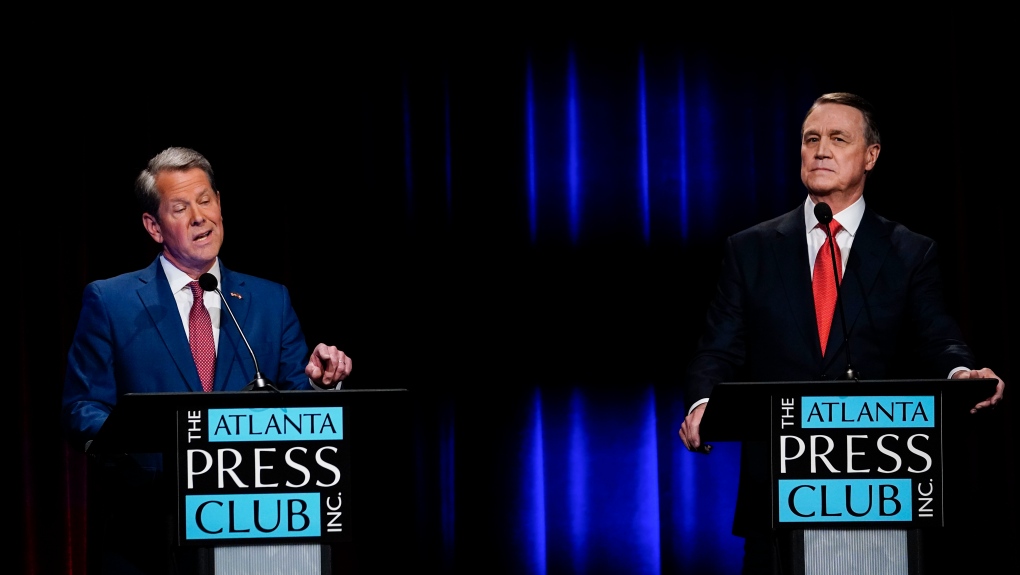 Georgia Gov. Brian Kemp defeated his Donald Trump-backed challenger David Perdue on Tuesday after a furious push by the former president to punish Kemp for not overturning the 2020 election results.

Kemp's victory sets up another general election race against Democrat Stacey Abrams, who was unopposed in her primary. The November rematch of their 2018 contest is likely to be one of the nation's most expensive and closely watched.

Perdue was courted by Trump to enter the race as retribution for Kemp not going along with the former president's effort to overturn his defeat in Georgia's 2020 election. Perdue embraced Trump's election lies, opening two debates between the candidates with the claim that the 2020 balloting was "rigged and stolen." Election officials found no evidence of fraud after multiple reviews.

Kemp survived the challenge by using the power of his incumbency to push a raft of legislation through Georgia's Republican-controlled legislature. He signed measures that cut taxes, allowed people to carry concealed handguns without permits and helped ban transgender girls from high school sports.

Abrams narrowly lost the governorship to Kemp in 2018 but became a leading national Democratic voice as a voting rights activist.

"Four years ago, I warned about the failure that Kemp was going to be. And four years later I am going to prove he was the wrong choice for Georgia," Abrams said earlier Tuesday.

Perdue was personally courted by former President Donald Trump to enter the race as retribution for Kemp not going along with Trump's effort to overturn his 2020 loss in Georgia to Democrat Joe Biden. Perdue embraced Trump's election lies, opening two debates between the candidates with the claim that the 2020 balloting was "rigged and stolen." Election officials found no evidence of fraud after multiple reviews.

Trump conducted an in-person rally for Perdue, sent more than US$3 million to two political action committees to pay for ads attacking Kemp on election issues, and kept up a steady stream of rhetorical fire against the incumbent. But Trump has not returned to Georgia since March, and Perdue's ads have been missing from Georgia television stations for much of the crucial early-voting period.

On Monday, former Vice President Mike Pence, appearing in suburban Atlanta to support Kemp, called the incumbent "one of the most successful Republican governors in America."

Kemp's focus on Georgia issues won over Will Parbhoo, a 22-year-old dental assistant.

"I'm not really a Trumper," Parbhoo said. "I didn't like him to begin with. With all the election stuff, I was like, `Dude, move on."'

Perdue scrambled for contributions, hitting Kemp on crime and for luring the Rivian Automotive plant to an area east of Atlanta over the objections of many residents.

Abrams has been running for months, seeking to burnish her image among Georgia voters with more than US$7 million in advertising, despite the lack of primary opposition.

The centerpiece of her platform remains a call to expand Medicaid to all adults, but Abrams is also highlighting her support for abortion rights and opposition to a law allowing the permitless carry of concealed handguns in public. The Democratic star has shown the ability to raise millions. Meanwhile, Republicans have raised the specter of her becoming governor to try to unify a party fractured by Trump's attempts to unseat Kemp.