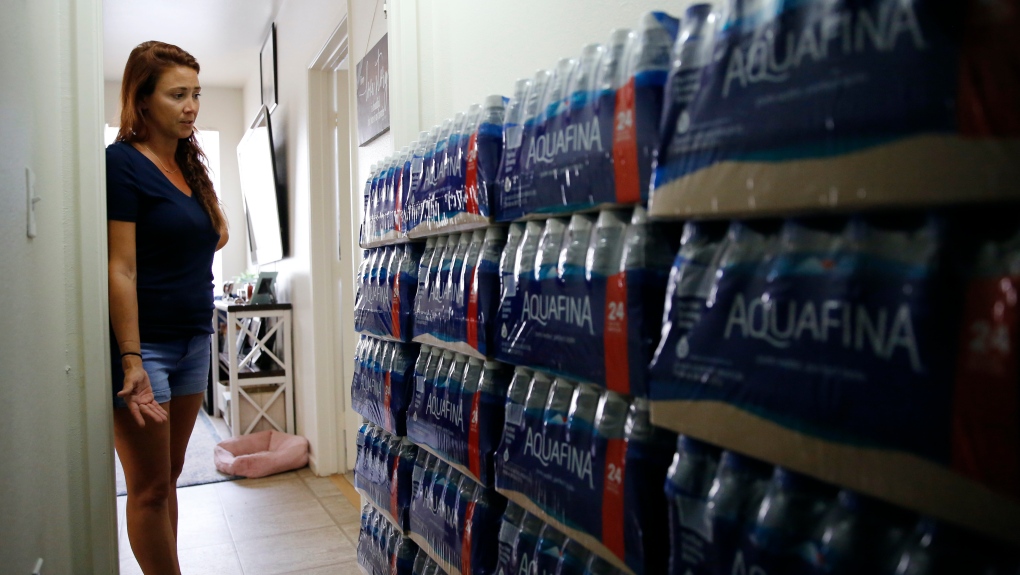 Lauren Wright, a Navy spouse whose family was sickened by jet fuel in their tap water, shows her supply of bottled water at her home in Honolulu, Friday, July 1, 2022. A Navy investigation says shoddy management and human error caused fuel to leak into Pearl Harbor's tap water last year. The leak poisoned thousands of people and forced military families to evacuate their homes for hotels. (AP Photo/Caleb Jones)
HONOLULU -

Lauren Wright continues to be leery of the water coming out of the taps in her family's U.S. Navy home in Hawaii, saying she doesn't trust that it's safe.

Wright, her sailor husband and their three children ages 8 to 17 were among the thousands of people who were sickened late last year after fuel from military storage tanks leaked into Pearl Harbor's tap water.

The family has returned to their military housing after spending months in Honolulu hotels, but they continue taking safety measures including taking short, five-minute showers. They don't drink their tap water or cook with it.

A Navy investigation released Thursday blamed the fuel leak and the water crisis that followed on shoddy management and human error. Some Hawaii residents, including Native Hawaiians, officials and military families said the report doesn't help restore trust in the Navy.

"I was at least hoping for some sort of remorse for the families and everybody involved in this," Wright said.

She said the ordeal has changed her view on the military from a decade ago when her husband first joined.

"I was the proud Navy spouse, you know, stickers and T-shirts," she said. "I feel like the Navy has failed at what they promised every service member. They failed at a lot of things. And I'm not so proud."

It's difficult to trust the Navy partly because Hawaii residents and officials for years have questioned the safety of the giant fuel storage tanks that have sat above an important aquifer since the Second World War, said Kamanamaikalani Beamer, a former trustee of the Commission on Water Resource Management.

"Releasing a report saying that they were lying to us is not a step towards building trust," he said. "De-fueling and getting the tanks out permanently, setting aside funds to remediate the water systems all across Oahu and replant our forests -- when I see steps like that happening -- that's a tangible step toward rebuilding trust."

Some Native Hawaiians said the report only deepened a distrust in the military that dates to at least 1893, when a group of American businessmen, with support from U.S. Marines, overthrew the Hawaiian kingdom. More recently, Native Hawaiians fought to stop target practice bombing on the island of Kahoolawe and at Makua Valley in west Oahu.

"There's no proof I should have faith in them," said Kalehua Krug, with Ka'ohewai, a cultural organization advocating for a clean aquifer for Oahu. "They've done nothing but lie for generations."

The Department of Defense recognizes the water problems "have damaged trust between the Department and the people of Hawaii, including Native Hawaiians -- and it is committed to rebuilding that trust," Gordon Trowbridge, acting assistant to the Secretary of Defense for Public Affairs, said in a statement.

The investigation report released Thursday listed a cascading series of mistakes from May 6, 2021, when operator error caused a pipe to rupture and 21,000 gallons (80,000 liters) of fuel to spill when it was being transferred between tanks. Most of the fuel spilled into a fire suppression line and sat there for six months, causing the line to sag. A cart rammed into this sagging line on Nov. 20, releasing 20,000 gallons (75,700 liters) of fuel.

The report said officials defaulted to assuming the best about what was happening when the spills occurred, instead of assuming the worst, and this contributed to their overlooking the severity of situation.

The spill contaminated the Navy's water system. Fuel didn't get into the Honolulu municipal water supply. But concerns the oil might migrate through the aquifer and get into the city's wells prompted the Honolulu Board of Water Supply in December to shut down a key well serving some 400,000 people. The agency has been asking residents to conserve water because of this and unusually dry weather.

The tanks continue to pose a threat to Oahu's drinking water while they hold fuel, said Ernest Lau, manager and chief engineer of the water utility.

The report saying it will take more than two years to drain the facility is concerning, Lau said Friday.

"The fact that they built this massive facility in three years, so can't they find a way to do all the necessary work in less than two and a half years ... I think it can be done," he said, urging the Navy to look at shortening the timeline.

This week, Defense Secretary Lloyd Austin "directed the establishment of a Joint Task Force led by a senior Navy admiral solely dedicated to a swift defueling effort, who will report to him through the commander of U.S. Indo-Pacific Command, to oversee defueling of Red Hill as rapidly as safety allows," Trowbridge said. "The Department recognizes that what we say is far less important than what we do, which is why its most senior leaders are focused on this effort."

Kristina Baehr, an attorney who represents more than 100 military and civilian families who lodged claims against the Navy, said it was especially troubling to read in the report how pervasive the errors were.

"This is a national security issue," she said, noting many of her clients were still experiencing the effects of the tainted water. "And our families and military communities cannot be mission-ready if the government has made them sick."

Olivia Newton-John, the singer and 'Grease' star who died on Monday in the United States, will receive a state memorial service in Australia, Victorian state Premier Dan Andrews announced Thursday.