Dispatches from Yosemite: Alone with the bears and beauty 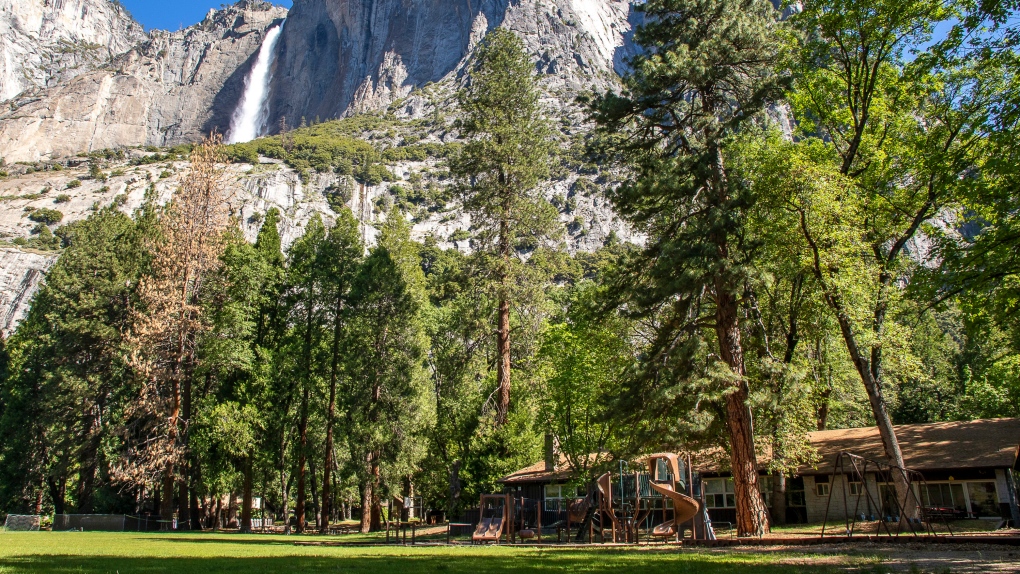 In this May 27, 2020, photo provided by the National Park Service, Yosemite Valley School, lower right, stands in Yosemite National Park, Calif. In the background is Upper Yosemite Falls. The school, the only one inside the 1,200-sq. mile (3,100-sq. kilometer) Yosemite park, shut its doors in mid-March due to the coronavirus pandemic like others across America and class has been convening online. But the pandemic hasn't stopped the presses on the school year's last edition of "The Yosemite Eye," a publication that has so charmed its community it boasts a circulation of nearly 5,000 copies. (Jamie Richards/National Park Service via AP)

The glacier-carved valleys of Yosemite National Park have been closed to the public for nearly three months and a few dozen lucky kids have had it mostly to themselves.

Locked down amid cascading waterfalls and giant sequoias, the kids and their families have passed afternoons hiking empty trails, rafting in the river and walking with wildlife now thriving in the near absence of humans.

Expect to read all about it in the upcoming edition of the Yosemite Valley School newspaper, the product of one of America's most historic and unique public schools.

The only school inside the 1,200-square-mile (3,100-square-kilometre) park has three classrooms for 35 students in K-8th grades -- the children of Yosemite's essential staff who live in a residential area of the park and are watching over it while it's closed.

The school shut its doors in mid-March like others across America and class has been convening online.

But the pandemic hasn't stopped the presses on the school year's last edition of "The Yosemite Eye," a publication that has so charmed its community it boasts a circulation of 5,000, distributed by a local weekly newspaper.

The young reporters take their mission seriously: "To give the outside world the inside scoop on day-to-day life here," as eighth grader Gabriela Reyes-Morris puts it.

Their school is tucked in a meadow overlooking Yosemite Falls, the tallest waterfall in America and a fine sight to see while playing kickball. Teacher Cathy DeCecco fondly calls it "Little House on the Prairie -- with Wi-Fi and robotics classes." The Yosemite Valley School dates to 1875 when it was a one-room schoolhouse.

The playground and playing fields face the towering waterfall, which offers a running soundtrack and shakes the schoolhouse walls when it reaches full throttle in spring. There's a massive old black oak tree outside that they sit under and read when the weather is nice. They have ski days in winter and go tadpoling in May.

Yosemite is usually teeming with visitors this time of year, and the park has indicated it may partially reopen in June.

Until then, there is an abundance of material to report from a Yosemite so majestic in its emptiness it feels like an Ansel Adams photograph come to life.

The bears, bobcats, coyotes and other animals are having a field day.

"There are definitely more stories to tell because all the animals are out now," said sixth grader Eva Peterson. "It's so fun to be in the park right now. There's nobody here."

Eva spotted a bear the other day. "It was too close, so we ran toward it," she said, without a hint of irony. "That's what you have to do. You have to make noise and get big, so it runs away." Jack, too, spotted a bear eating a deer in Cook's Meadow. At night, a mountain lion in the trees is making a strange sound that park residents think could be a mating call, said Patsy Fulhorst-Kirtland, who teaches fifth through eighth grade and is the Eye's co-editor.

The kids interview all kinds of Yosemite VIPs, some of whom are their parents, such as Chief Ranger Kevin Killian and Judge Jeremy Peterson. They cover events in the park and write about what makes their school so special. It is indeed the stuff of childhood dreams.

"The park is the constant inspiration for all the kids," said Fulhorst-Kirtland, who started the paper as an after-school club last year with a parent volunteer, Maria Victoria Espinosa-Peterson.

The newspaper has a big audience thanks to the Mariposa Gazette, a local weekly newspaper outside the park. Greg Little, the Gazette's editor and co-owner, publishes it as a quarterly insert in the Gazette, which has a circulation of 4,000. Another 500 copies are distributed in the park. Fulhorst-Kirtland got a grant that paid for this year's printing costs.

Little and his wife, Nicole, the Gazette's publisher, have given photography and writing workshops to the kids, and are now getting scooped by them, Little says. The last edition included an interview with Yosemite National Park's new acting superintendent.

"They had the only interview anyone has with Cicely Muldoon. I tried to get it, everyone has tried to get it. But they got the exclusive," Little said.

Reader response has been tremendous, Little said. In one letter to the editor, Judith Ann Durr, 73, wrote to say that she had Alzheimer's which made it hard to read. "But when I tried reading the paper by the Yosemite kids, I just couldn't stop," she wrote. "They get right to the point and explain things clearly."

Naturally, the upcoming June edition will feature some stories on coronavirus, from the children's perspective.

Talleulah Barend, a fifth grader, is writing about how video games are helping people socialize. There is a story on making masks, and a word search featuring coronavirus keywords, like "Zoom." Graduating eighth graders who are leaving to attend a high school outside the park usually get to give speeches. The paper will publish those.

Reyes-Morris, one of two eighth graders, credits the paper with helping her find her own voice.

"It gives you a sense of responsibility and for a small school like us," she says, "it's the first time as kids that we've gotten to speak out to the world."