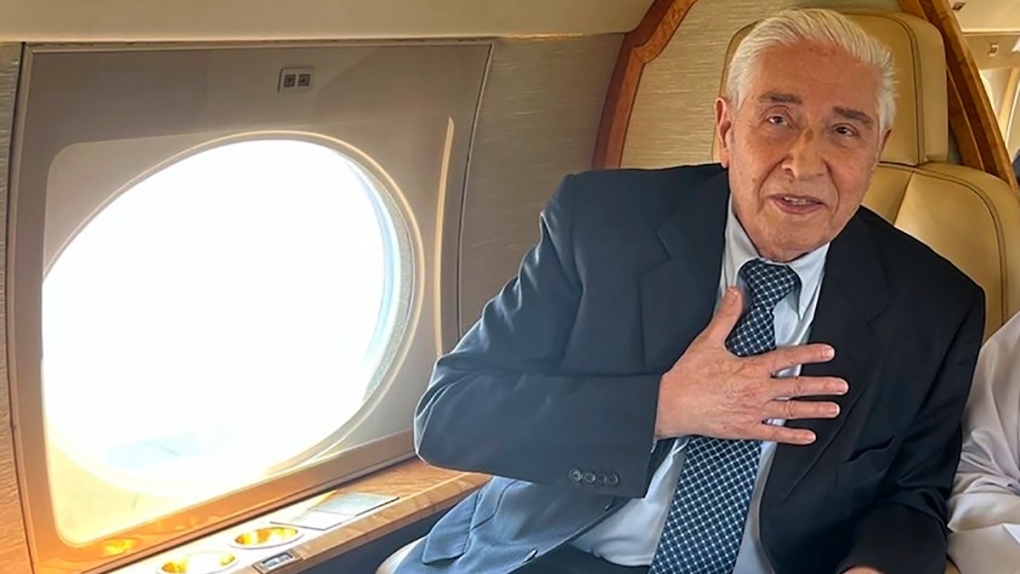 An 85-year-old Iranian-American detained for six years in Iran on what the U.S. says were specious espionage charges left the country and arrived in Oman on Wednesday on his way for urgent medical treatment elsewhere in the Gulf.

Namazi's release is the first of an American by Iran since President Joe Biden took office, although his son, Siamak, 50, and several other Americans remain in Iranian custody. Baquer Namazi's release on humanitarian grounds, which was brokered by the United Nations, comes as talks have stalled on reviving the tattered 2015 Iran nuclear deal with world powers.

Jared Genser, a Washington-based lawyer representing the Namazi family, shared a photo of Namazi on the plane in a suit and tie.

"Today is a good day for the Namazi family, but the work is far from over," Genser said in a statement. "We now need the United States and Iran to act expeditiously to reach an agreement that will finally bring all of the American hostages home." In addition to Siamak Namazi, there are at least three other Americans still held by Iran.

After a brief stop in Oman, Namazi will undergo a procedure at the local branch of the Cleveland Clinic in Abu Dhabi to clear a severe blockage to his left internal carotid artery, Genser said. That blockage put Namazi at high risk of a stroke.

The Biden administration said it was pleased that Namazi had been allowed to leave Iran and his son had been given a temporary release from prison.

He thanked "all of the countries and organizations that have helped our wrongfully detained citizens" but did not specifically mention Iran.

Namazi is a former UNICEF official who served as governor of Iran's oil-rich Khuzestan province under the U.S.-backed shah. He was arrested in 2016, apparently drawn to Iran over fears about his incarcerated son detained in 2015.

He was placed under house arrest for medical reasons in 2018 but prevented from leaving Iran despite his family's pleas that he travel to receive emergency heart surgery after suffering multiple hospitalizations.

Last October, he underwent surgery in Iran to clear a blockage in an artery to the brain that his family and supporters described as life-threatening.

Security forces arrested his son, Siamak Namazi, an advocate of closer ties between Iran and the West, while he was visiting Iran on a business trip.

Both Namazis were sentenced to 10 years in prison in Iran on what the U.S. and U.N. say were trumped-up spying charges.

The U.N.'s Working Group on Arbitrary Detention dismissed the cases against the two men, saying in 2017 their case is part of "an emerging pattern involving the arbitrary deprivation of liberty of dual nationals."

"There is no evidence either Mr. S. Namazi or Mr. B. Namazi had a criminal record, including in relation to national security offenses," their report read. "There is nothing to indicate that they have ever acted against the national interests of the Islamic Republic of Iran."