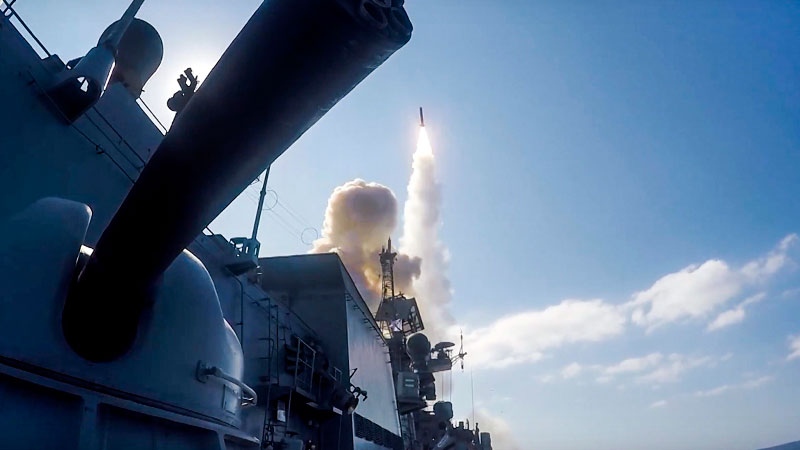 ANKARA, Turkey -- The first shipment of a Russian missile defence system has arrived in Turkey, the Turkish Defence Ministry said Friday, moving the country closer to possible U.S. sanctions and a new standoff with Washington.

A Defence Ministry statement said "the first group of equipment" of the S-400 air defence systems has reached the Murted Air Base near the capital, Ankara. Defence Minister Hulusi Akar said three planes carrying the equipment landed at the airfield on Friday, adding that the delivery would continue in the coming days.

The U.S. has strongly urged NATO member Turkey to pull back from the deal -- reportedly costing more than $2 billion -- warning the country that it will face economic sanctions under the Countering America's Adversaries Through Sanctions Act if it goes ahead with the purchase. It has also said Turkey won't be allowed to participate in the program to produce high-tech F-35 fighter jets.

Although U.S. President Donald Trump expressed sympathy toward Turkey's decision to purchase the Russian system during a meeting with Turkish President Recep Tayyip Erdogan on the sidelines of a G-20 meeting in Japan, Washington has repeatedly said that the Russian system is incompatible with NATO systems and is a threat to the F-35.

Sanctions would mark a new low in the already-tense relations between Turkey and the U.S. Last year, the United States imposed sanctions on Turkey over its detention of an American pastor, triggering a Turkish currency crisis.

The deal with Russia -- the first such deal between Russia and a NATO member -- has also raised concerns that Turkey is drifting closer to Moscow's sphere of influence.

The prospect of a further rupture in Turkey's relations with Washington also raises a delicate issue rarely mentioned in public: the status of American nuclear weapons stored at Turkey's Incirlik air base. Turkey has had a nuclear role in NATO for decades, but this new split is likely to cause some in Washington to question the wisdom of keeping those nuclear bombs at Incirlik. Locations of U.S. nuclear weapons abroad are not publicly acknowledged by the U.S. as a matter of policy.

Turkey has refused to bow to U.S. pressure, insisting that choosing which defence equipment to purchase is a matter of national sovereignty.

"We've always said regarding the S400s that it's an agreement that has been finalized and the process continues to progress," Turkish Foreign Minister Mevlut Cavusoglu told reporters. "There's no problem and the process will continue in a healthy way going forward."

In Russia, Kremlin spokesman Dmitry Peskov told reporters: "Everything is going strictly in compliance with the agreements and contracts signed." He would not comment on a timeframe for the delivery but insisted that both parties are committed to complying with the contract.

Soner Cagaptay, director of the Turkish Research Program at The Washington Institute, said Turkey's purchase of the Russian system marks a "tectonic" shift in Turkey's security and foreign policy.

"Unfortunately, it looks like not only will there be U.S. sanctions but also probably a Turkey-U.S. rupture," Cagaptay said. "This is tectonic because a rift with the United States now -- at a time when Turkish-EU ties are also under strain -- which would also impact Turkish-NATO ties, would leave Turkey alone against Russia for the first time in nearly 180 years."

A Turkish Defence Ministry video showed two planes landing at the air base and unloading various military trucks, some of which appeared to be carrying parts of the system. The Russian Ministry of Defence also shared a video showing the equipment being loaded onto the planes and then being offloaded in Ankara.

Turkey has said it was forced to buy the S-400s because Washington refused to supply the American-made Patriot systems to Turkey.

U.S. officials have since encouraged Turkey to buy the Patriot missile defence system instead of the S-400s. Turkey has said the offer does not meet its requirements, including possible future joint production.

On Friday, Akar said, however, that Turkey was also considering purchasing the American system.

"Our talks on the Patriot issue are continuing," the state-run Anadolu Agency quoted Akar as saying. "As long as they meet the criteria, of course we are considering the procurement of the Patriots to cover our need for a long-range air and missile defence system."

Akar said Turkish military personnel were being trained in Russia and in Turkey on how to install and use the system.

The U.S. has already stopped training Turkish pilots on the F-35, and given Ankara until the end of July to get its personnel out of the U.S.

Turkey maintains that it has fulfilled all of its financial obligations concerning the F-35 program and cannot be excluded from the project.

Turkey has refused to say where it intends to deploy the S-400. Turkish media reports have said it could take until October for the system to be fully operational.