Despite renewed strikes, France pushes on with pension plan 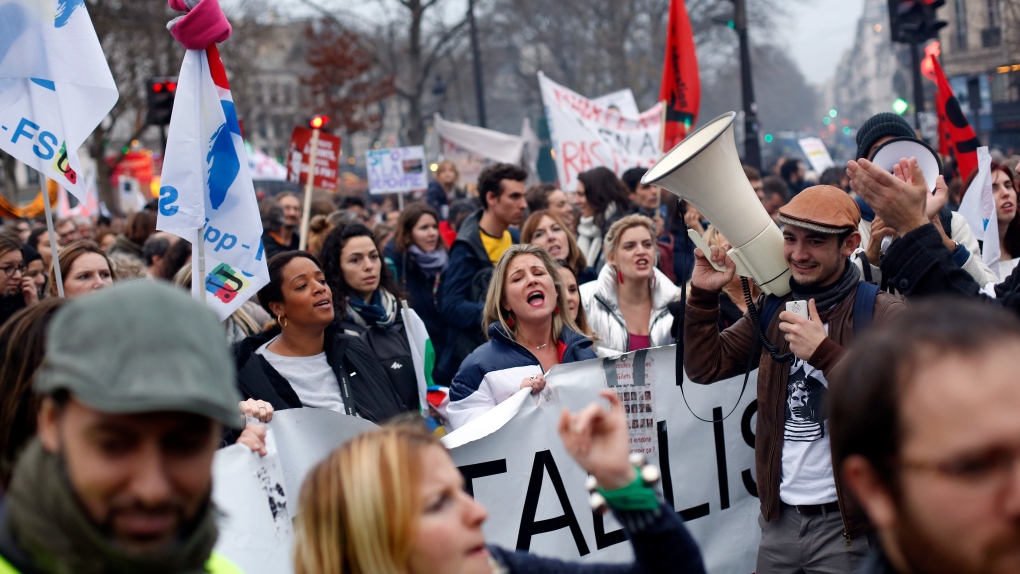 It's President Emmanuel Macron's signature reform, aimed at streamlining an increasingly costly system that allows some people to retire as early as their 50s. But it has unleashed 50 days of strikes and new protests in Paris and other cities Friday by unions who see it as an attack on hard-won worker rights, and France's way of life.

Macron's government struggled Friday to sell the plan to a skeptical public after the Cabinet approved two bills aimed at enshrining the changes.

The bills leave many questions unanswered, and government ministers dodged questions about a central concern: whether the retirement age will go up, and by how much. Currently French people who have worked a full career can retire with a full pension at 62.

As the Cabinet met in the Elysee presidential palace, protesters marched along the Seine River past the nearby Louvre Museum, demanding that the government scrap the plan altogether.

"We're against change when it's damaging to us, against change that goes against social progress in society. It's normal for us to show we're opposed to it," said Francois Hommeril, head of the CFE-CGC union.

A group of women workers, dressed in blue work shirts and yellow gloves like the "Rosie the Riveter" figure immortalized in U.S. wartime posters, danced and sang to complain that the reform unfairly hurts women.

"The idea was to show everyone, in a playful and fun way with our dance, that those who have the most to lose ... are women," Valerie Lefebvre-Hausmann, a bank employee and union leader, told The Associated Press.

The government insists the new system will be more fair than the old one, including for women.

Travellers faced renewed disruptions on regional trains and the Paris subway, and some schools and other public services also faced walkouts. The Eiffel Tower closed exceptionally, and the Versailles chateau and Louvre Museum warned visitors of potential disruptions.

The number of striking workers and halted trains dropped considerably this week after the government made a series of concessions. But unions hope Friday's actions will revive opposition to the reform.

The bills go next month to parliament, where Macron's centrist party has a large majority and is all but sure to approve it.

The plan will streamline France's 42 retirement systems into a single points-based system for all workers, public and private sector alike, and abolish special provisions for some workers. It will also introduce a minimum pension.

The new points system will come into place starting in 2022 for the youngest workers, and then gradually for older workers. It will only affect those born after 1974.

The government backed down earlier this month on plans to raise the age to receive a full pension to 64, at least for now. Instead, Prime Minister Edouard Philippe agreed to negotiate with unions starting next week on a way to make the new retirement system financially sustainable -- and that's likely to require eventually raising the retirement age.

The government has also negotiated deals with various sectors -- including pilots, members of the military and police -- who will still be able to retire earlier than others.

Macron argues that the old system was unfair, outdated and too costly for a country with growing life expectancy.

Over the past three decades, governments have made changes to the retirement system, but each reform has been met with massive demonstrations -- and none managed to simplify it.