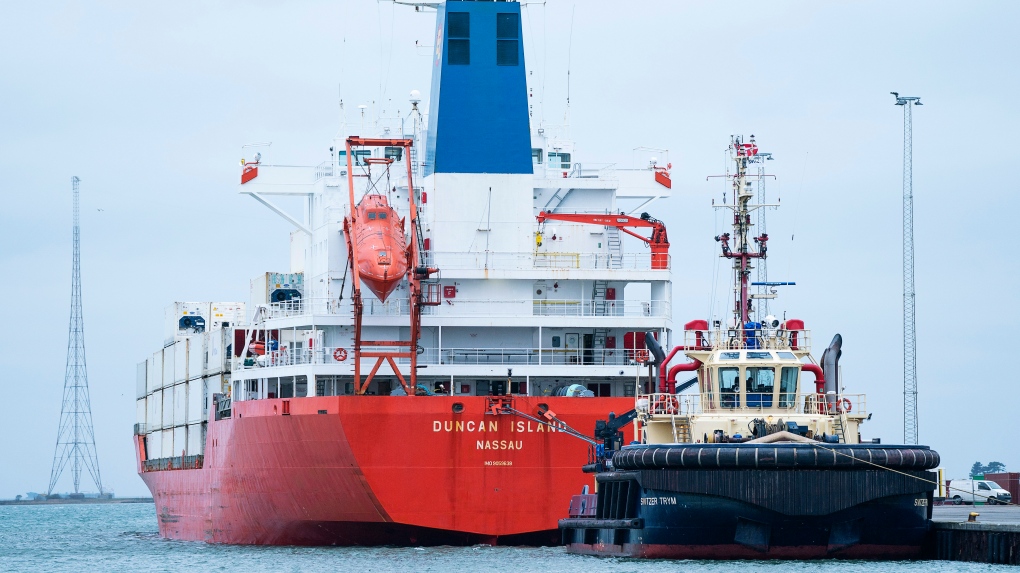 The cargo ship Duncan Island in Kalundborg Harbour in Denmark on Sunday, Feb. 16, 2020. Danish police say they have arrested 27 people for suspected drug smuggling after having found some 100 kilograms of cocaine at a Bahamas-registered cargo vessel, the Duncan Island, plying on Danish waters. (Claus Bech/Ritzau Scanpix via AP)

HELSINKI -- Danish police say they have arrested 27 people for suspected drug smuggling after finding some 100 kilograms of cocaine on a Bahamas-registered cargo vessel plying Danish waters.

Copenhagen police said Sunday in a statement that the cocaine was seized during an internationally co-ordinated bust on Saturday on the container ship Duncan Island while it was sailing south of the town of Gedser.

The suspects, all foreigners, are charged with serious drug crimes under Danish law and may face a sentence of up to 16 years in prison. They include the vessel's international crew with Russian, Latvian, Ecuadorian and Filipino nationals among others and remain in custody pending further investigation.

"We're naturally very pleased that many kilos of cocaine have not hit the street. Now we are investigating further to find out who is waiting in vain for the deliveries," said Inspector Dannie Rise, the head of the special Investigation unit at the Copenhagen police.

According to Danish broadcaster TV2, the vessel was en route from Helsingborg, Sweden to St. Petersburg, Russia when it was seized by authorities. It said the cocaine is believed to have a street value of approximately 350 million Danish kroner ($50 million).