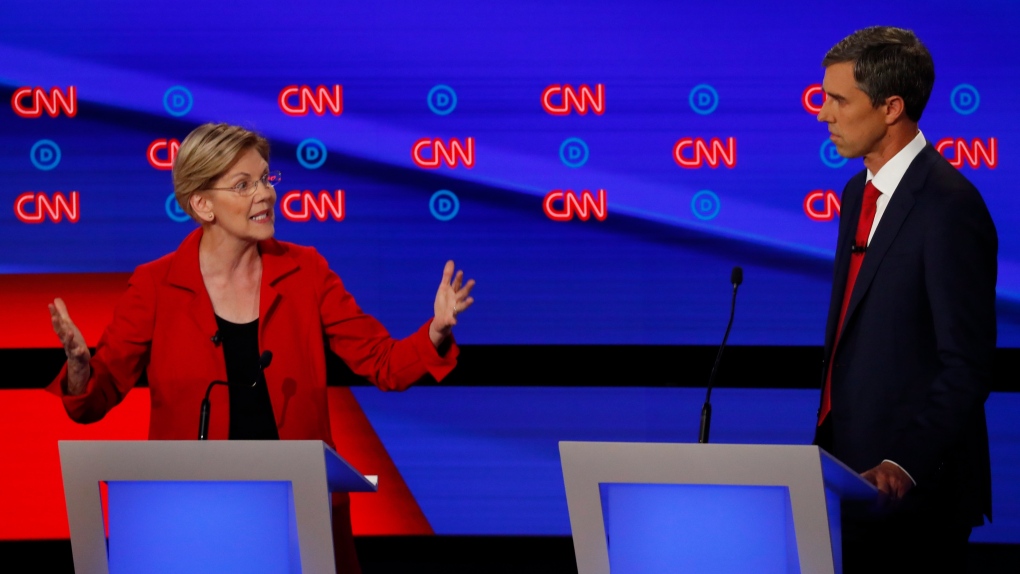 DETROIT -- Should Democrats be going big or getting real? That's the question that dominated Tuesday's Democratic primary debate, as progressive favourites Elizabeth Warren and Bernie Sanders fended off attacks from lesser-known moderates. The display amounted to a sometimes testy public airing of the party's anxieties about how far left is too left and how to beat President Donald Trump. Here are the key takeaways from the debate:

The battle lines were clear from the opening remarks. This was the pragmatists against the front-runners seeking transformational change.

Over and over, moderate candidates like Montana Gov. Steve Bullock, former Colorado Gov. John Hickenlooper and former Rep. John Delaney argued Sens. Elizabeth Warren and Bernie Sanders' plans -- from Medicare for All to the Green New Deal -- are unrealistic and would scare off voters.

Hickenlooper called for "an evolution, not a revolution" on health care.

The attacks weren't shocking in a debate that featured the progressive standouts Warren and Sanders onstage with a handful of lesser-known moderates looking to seize the spotlight. But the two senators' unified front in fighting them off was notable. Though they are jockeying for some of the same voters, Warren and Sanders didn't bother going after each other. They largely beat back the moderate critique of their call for sweeping, systemic change with similar arguments.

Sanders argued his health plan is "not radical" and achievable. Warren said the country's problems can't be solved with "small ideas and spinelessness."

Donald Trump loomed large over the Democratic debate stage. Repeatedly, the candidates mixed their policy plans with political strategy -- arguing over whether their party's leftward push will only open them up to GOP criticism.

On topics from Medicare for All to immigration, Warren and Sanders found themselves under attack as their more moderate competitors told them their policies only played into Trump's hands.

The notion of taking away private insurance from millions and a Green New Deal that "makes sure that every American's guaranteed a government job that they want" is "a disaster at the ballot box," Hickenlooper said.

"You might as well FedEx the election to Donald Trump," Hickenlooper said. Delaney wondered, "Why do we have to be so extreme?" Even self-help author Marianne Williamson chimed in to say she does "have concern about what the Republicans would say."

South Bend, Indiana, Mayor Pete Buttigieg tried to end the unusually public display of anxiety, declaring, "it is time to stop worrying about what the Republicans will say."

MEDICARE FOR ALL TAKES HEAT

If the fight was between centrists and progressives, Medicare for All was the weapon.

The early moments of the debate was dominated by a fight over whether Sanders' plan to eliminate private insurance in favour of a universal government health plan is possible, practical or political suicide.

At times, with Medicare for All supporters Sanders and Warren outnumbered, the centrists piled on, raising doubts about the quality of care it could offer, the costs and the disruption to the health care system. Ohio Rep. Tim Ryan called it "bad policy and bad politics." Bullock said he couldn't support a plan that "rips away" insurance from Americans who have it.

"It used to be Republicans who wanted to do repeal and replace," Bullock said, referring to the Republican refrain on getting rid of President Barack Obama's Affordable Care Act.

Sanders, who has spent much of his career on the issue, grew agitated as he defended the plan. The coverage would actually be better, he argued.

"I do know," Sanders fired back. "I wrote the damn bill!"

UNITED AGAINST TRUMP ON RACE

For all the divisions onstage Tuesday, the candidates were unified in rebuking Trump's racist comments and using race as a campaign theme.

Trump in recent weeks has told four congresswomen of colour to "go back" to the countries they came from and criticized Rep. Elijah Cummings' Baltimore-area district as a "rat and rodent infested mess."

"I have had it with the racist attacks," Klobuchar said in her opening statement.

Buttigieg also directed criticism at members of Congress he said are supportive of or silent on "naked racism" in the White House.

"If you are a Republican member of Congress, consider the fact that when the sun sets on your career, and they are writing your story of all the good and bad things you did in your life, the thing you will be remembered for is whether in this moment, with this president, you found the courage to stand up to him or you continued to put party over country," he said. It was one of the loudest applause lines of the night.