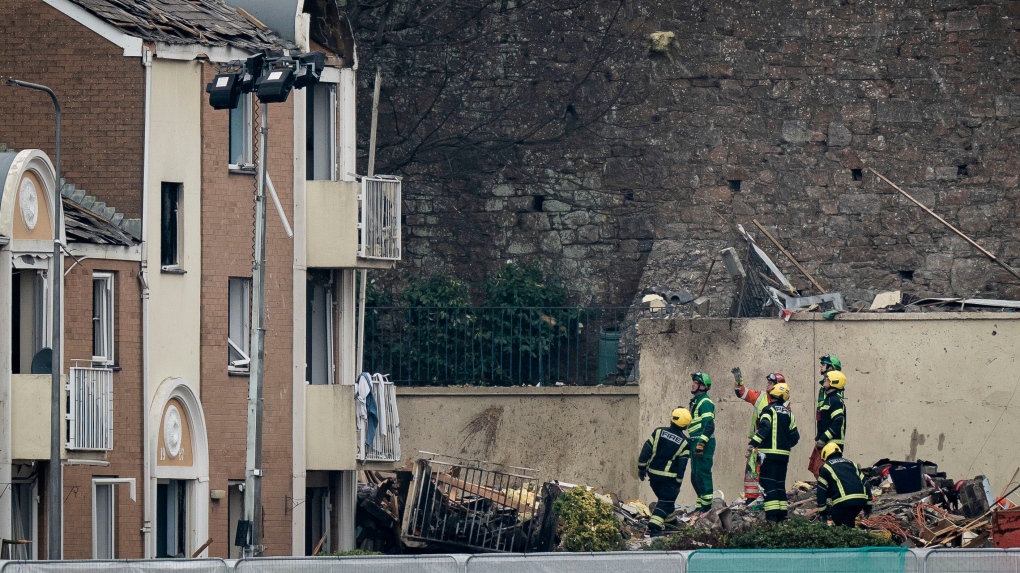 Specialist rescue teams at the scene of an explosion and fire at an apartment building in St Helier, Jersey, Channel Islands, on Dec. 11, 2022. An explosion and fire in an apartment building has killed at least three people and left several missing. The chief officer of the States of Jersey Police said “around a dozen” residents were missing on Saturday following the blast in the town of St Helier. (Aaron Chown/PA via AP)
LONDON -

The number of people killed in an apartment building explosion and fire on the English Channel Island of Jersey has risen to five, and four others are still unaccounted for, police said Sunday.

Robin Smith, chief of Jersey Police, said specialist teams continued a painstaking search of the area in St. Helier, the island's capital, and warned it was likely to be weeks before investigations were completed.

"There are still a number of residents, we are working on the assumption of four, that remain unaccounted for," he said. "Their families were made aware of this announcement before other islanders. They continue to be supported by special officers."

A blast destroyed a three-story apartment block in St. Helier at about 4 a.m. on Saturday. Smith said the fire was "likely" caused by a gas explosion, but that has not yet been confirmed.

Smith said the fire service had been called to the area the night before after residents reported smelling gas. He said police would investigate "whether or not there was a safety issue" with natural gas lines.

Authorities said Sunday that the search mission was now a "recovery operation" and they no longer expect to find anyone alive.

"We have moved to a recovery stage, it's a moment to think about the families," Smith said.

Jersey, the largest of the Channel Islands, is a self-governing dependency of the United Kingdom located off the coast of northern France in the English Channel.

Gas supplier Island Energy said it is working with the fire service to "understand exactly what has happened."

Zoom is cutting about 1,300 jobs, or approximately 15% of its workforce. CEO Eric Yuan said in a blog post Tuesday that the company ramped up staffing during the COVID-19 pandemic, when businesses became increasingly reliant on its service as people worked from home. Yuan said Zoom grew three times in size within 24 months to manage demand.