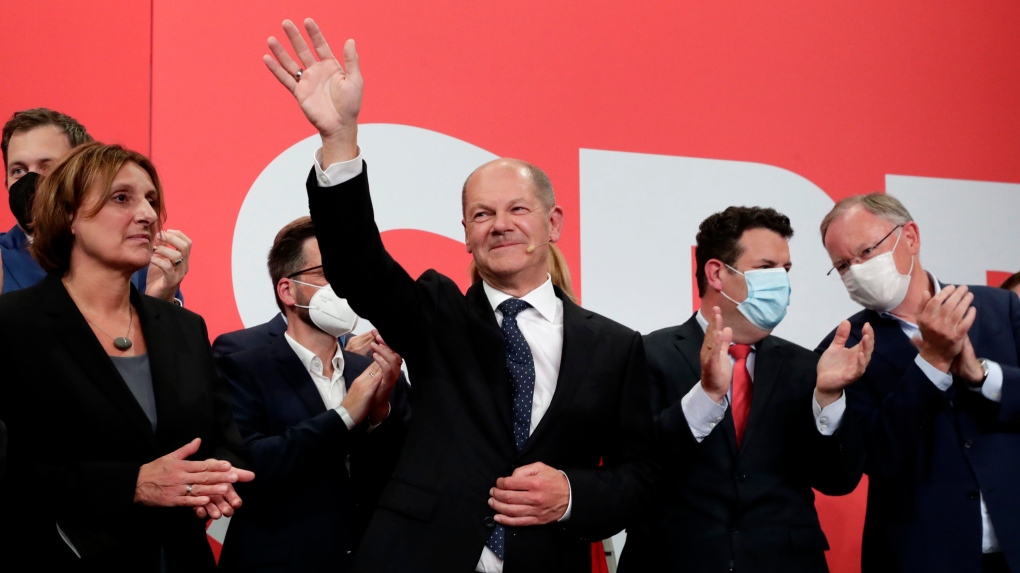 Germany's environmentalist Greens said their members approved the agreement reached last month, with 86% voting for it in a ballot. The other two parties -- Scholz's center-left Social Democrats and the pro-business Free Democrats -- overwhelmingly backed the agreement at weekend conventions.

"We are going into a strong new government, with a very strong and diverse Cabinet, with strong tailwind from the ballot," said Green co-leader Annalena Baerbock, who is set to become Germany's first female foreign minister.

Her party made it clear that it sees efforts to curb climate change as the next government's top priority. Other priorities include modernizing Europe's biggest economy and introducing more liberal social policies.

Scholz will be elected as chancellor in parliament on Wednesday, ending the center-right Merkel's 16-year tenure. He will need the support of at least 369 lawmakers in the 736-seat lower house. The three coalition partners have 416 seats between them, so he should be assured of a comfortable majority.

Hours before the Greens cleared the path for that vote, Scholz presented his party's nominees for the Cabinet, completing his 17-member team.

The most closely watched appointment was that of health minister, as Germany struggles to bring down its highest coronavirus infection rates of the pandemic so far. Scholz chose Karl Lauterbach, an epidemiologist and media-savvy lawmaker who lacks executive experience but has been one of Germany's most prominent voices urging caution and strict measures against COVID-19.

"The pandemic is far from over," said Scholz. "Most people in this country certainly wanted the next health minister to be a specialist who can really do it well, and for him to be called Karl Lauterbach."

Asked about the Christmas holidays, Lauterbach said "an important aim must be to bring the case numbers down so far that we can recommend travel without endangering people."

Announcing his choices for the interior and defense portfolios, Scholz said Germany's "security will be in the hands of strong women."

Nancy Faeser, a lawyer who heads the party's branch in the central state of Hesse, was an unexpected choice to become Germany's first female interior minister, a post that includes oversight of federal police forces and the domestic intelligence agency. Faeser said a major focus will be fighting far-right extremism, which she called "the biggest threat" to the country.

The Greens and the Free Democrats already have named their ministers. Scholz's vice chancellor will be Robert Habeck, who leads the Greens along with Baerbock. He will head an economy and climate ministry, a new combination.

The Greens' five Cabinet members include Cem Ozdemir, who will become the first federal minister of Turkish origin six decades since guest workers began coming to Germany from Turkey after World War II.

A long-time vegetarian, Ozdemir said that as agriculture minister he had no plans to force a meat-free lifestyle on others and emphasized that cutting Germany's greenhouse gas emissions should be the overarching goal for the next government.

"That's what we're going to be measured by," he said.

The Greens, however, will have to overcome resistance from the Free Democrats, whose leader Christian Lindner will become finance minister and effectively the No. 3 official in the new government. Lindner's party has a strong free market approach and successfully blocked putting a universal speed limit on German highways in the coalition agreement.

Habeck, the Greens' co-leader and future climate minister, acknowledged he would have liked to have seen a speed limit, which experts say would be an easy way to cut emissions. But in return for allowing Germans to speed along the Autobahn, the new coalition government is committed to measures that amount to ending the sale of gasoline-powered vehicles in the 2030s, he said.

Scholz had pledged a gender-balanced Cabinet -- which it is, if one doesn't count the chancellor.