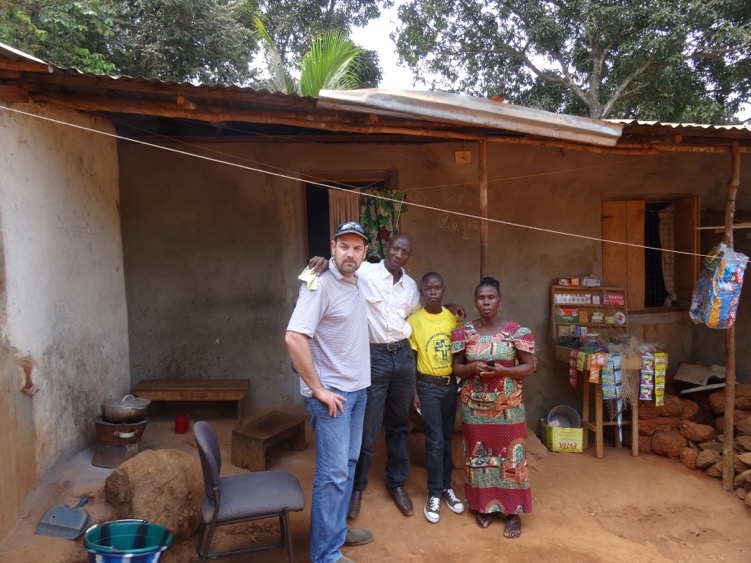 Massa in Freetown earlier this year, with his wife Augusta and son. CTV News' Ethan Faber is with the family, on the left.

The text arrived just after lunchtime. Augusta had managed to punch out a long message on her old cell phone. As I read it, I thought of her sitting on a stool in the dark, 11,000 kilometres away in Freetown, Sierra Leone’s capital city. It must have taken her quite some time to compose it, writing in English rather than her native Krio. She would have been crying, too, because the news she was sending was very bad indeed. “I sorry that I have lost my husband Mr. Massa your friend.” 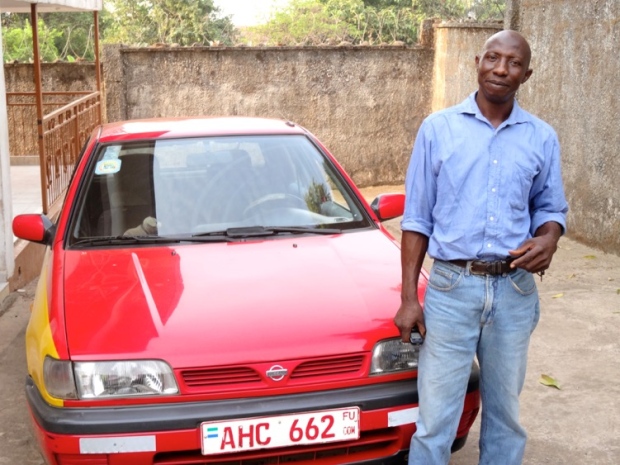 Massa, my dear friend, was dead. It didn’t seem possible. Massa, the taxi driver with the brightest smile in West Africa, was a survivor. Nothing could kill him. He’d had malaria more times than you could count, treating it with a slug of palm wine, the local drink.

When Sierra Leone’s civil war came to his street a dozen years ago, Massa dug a hole in the red dirt with his bare hands, climbed in, covered himself with a banana leaf, and lay there for two days, listening as the rebels slaughtered his neighbours. “So, what killed him?,” I texted back. Augusta’s answer: “A severe cold.”

I should have known. I spent a month in Freetown earlier this year, and I never once feared for my personal safety. The people of the capital, like Massa, are beautiful souls, giving away smiles freely as they struggle to make it through another day in a country that consistently ranks as one of the ten poorest on earth, according to the United Nations Human Development Index. What was truly scary during my stay was the fear of getting sick.

Sickness is everywhere in Sierra Leone and often fatal. The first woman I met was named Kaday. She’d come to fetch me at the Freetown airport. To make conversation, I asked if she had children. “I had a son,” she said. Had. Then she looked down. When I asked other mothers about their families over the next few weeks, the answer was almost always phrased the same way. "I have four children, two living." "Five children, three living." And so on. Sickness and death in Sierra Leone is a way of life. I guess that’s why it made sense, in a miserable sort of way, that a cold -- or something like it -- had taken Massa from this earth.

The next day, I reached another friend in Freetown named Yeama. She’d been my host as I trained young news reporters in town as part of a collaboration between CTV News and the Toronto-based aid organization Journalists for Human Rights.

Yeama had learned more about Massa's final days. He had a sore throat that wouldn’t go away, but he wouldn’t see a doctor. He was afraid of being quarantined with Ebola patients.

So, in a way, Ebola was responsible for his death, but the deeper cause was something more deadly, something that’s been plaguing West Africa for generations -- a lack of health care, education, basic sanitation, and the lack of trust in government institutions that comes with it. 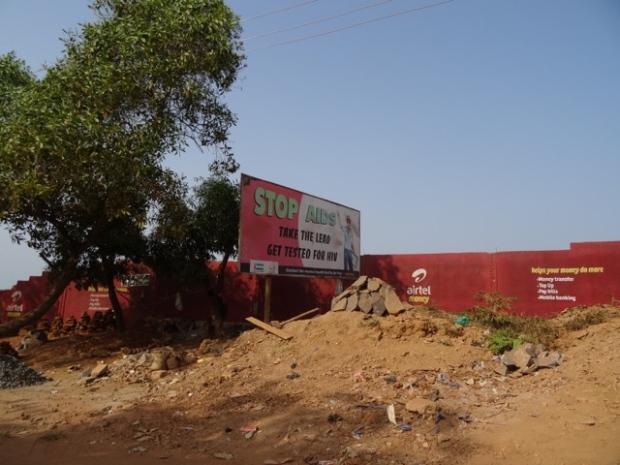 Suddenly, Massa’s palm wine cure for malaria wasn’t so funny. I remembered him laughing when I tried, unsuccessfully, to convince him that mosquitoes carry the virus. Massa didn’t trust doctors, but who could blame him? He had driven me around Freetown as I worked with a young reporter on a story about a woman named Fatmata. Her newborn baby girl died in her arms in a hospital waiting room. She didn’t have any money so the nurses refused to admit her.

This happened two years into a much-trumpeted new health care initiative by the government of Sierra Leone that "guarantees" free access to medical treatment to all new mothers and their babies in a country where the infant mortality rate is one of the world’s highest.

The same government is now accepting millions of dollars in aid to fight Ebola and once again there are much-trumpeted "initiatives." But this is a place where cholera still kills on a regular basis. Remember cholera? The disease has been eradicated in most of the world, but not in Freetown, despite millions of dollars in aid to stop that ugly affliction. Sure, there are colourful messages posted on signboards all over town. "Stop Cholera. Wash Your Hands," they say. We drove past the signs one day as Massa told me about the man who died the week before from cholera in the back seat of his taxi.

Now I see in news footage out of Freetown that there are new signs on display. "Stop Ebola." The message is written on the image of a bright red stop sign. But the truth is, stopping an epidemic requires more than signs on the side of the road. It starts with the basics and in Sierra Leone, I can tell you the basics do not exist. Not even close.

"More people die of malaria in that part of the world every year, and there is already a cure for that."

In India, it was 1925 when Mahatma Gandhi observed, "Sanitation is more important than independence." In 2014, there is no clean water coming out of the taps in Freetown, a city of more than a million people.

On some days, nothing comes out of the taps at all, because the supply of dirty water depends on a rusty pipe that runs alongside what barely passes for a road from the distant mountains into the city. I was teaching in a radio newsroom one morning and I suggested we do a story on the fact that the water had been shut off for four days straight, and the reporters just looked at me. Dry faucets are nothing new and apparently, not even news. And don’t even think about refrigeration. You need electricity for that, and there is no steady source for Freetown either. The rich have gas-powered generators. The rest go without.

No refrigeration, no electric fans, no clean water and no health care system in a tropical climate buzzing with malarial mosquitoes in 90 percent humidity. And now Ebola?

So, what to do about Ebola? Is the outbreak really a "crisis" in a place where sickness and death is already so common? I suppose it is. The “Ebola Update” I get on Facebook from my Freetown friends each morning shows dozens of new cases every day.

But the story of preventable disease isn't new for West Africa. More people die of malaria in that part of the world every year, and there is already a cure for that.

Massa’s lack of basic knowledge about science and hygiene and his well-founded fear of anything run by his dysfunctional government kept him home in bed and away from the hospital while his sore throat lingered. Yeama tells me he reluctantly went to a health clinic when the pain became too much to bear, but it was too late.

We still don’t know exactly what killed Massa, and even that fact isn’t a surprise. I’d already seen an example of the ambiguity of death in Sierra Leone while I was in Freetown. His name was Ishmail, a security guard I’d come to know at the local TV station and I often bought him a Fanta at the end of the day. One morning, I noticed he was missing. His friends told me he’d died the night before "from a headache." He was 29. 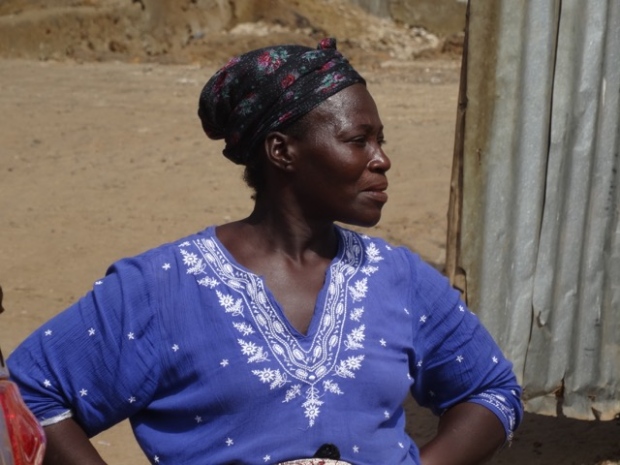 I think of Massa and his sore throat, Fatmata and her baby, Ishmail and his headache, and I picture Augusta (pictured above) sitting there on her stool punching out text messages in the dark. It's hard not to think the rest of the world may be missing the point.

Maybe Ebola is not the biggest problem. Maybe it’s just the latest symptom of something far more deadly – something that’s claimed the life of my dear friend, a man for whom lack of basic scientific knowlege and well-founded fear came together with fatal consequences in a broken country that needs our help.